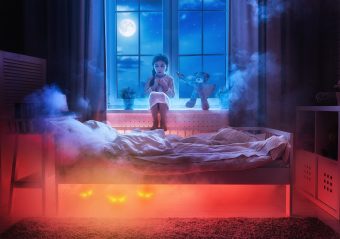 Are you scared of the dark? Do you sleep with the light on? Do you hear noises in other parts of the house when you know you’re alone? You’re about to read a ghostly tale with an incredible twist: It really happened!

William Wilmer, an ophthalmologist who practiced in Washington, D.C. in the early 1900s, was one of the most distinguished eye doctors of his era. Among his patients were eight different presidents, from William McKinley to Franklin Roosevelt. He also treated Charles Lindbergh, the famous aviator; Joseph Pulitzer, the New York newspaper tycoon and creator of the Pulitzer Prize; and countless other prominent Americans. But perhaps his most unusual claim to fame is the fact that in 1921 he managed to talk a prestigious medical journal, The American Journal of Ophthalmology, into printing a ghost story.

The story had been recounted to Dr. Wilmer by one of his patients, whom he identified only as “Mrs. H” to protect her privacy. The strange occurrences she and her family experienced began in 1912, shortly after she, her husband, and their children moved into a large, run-down old house that hadn’t been lived in for about a decade. The house didn’t have electricity—it was lit with gaslights and heated by an old furnace in the basement.

The gloomy old house soon began to exert a strange influence on its new occupants, as Mrs. H recounted in Dr. Wilmer’s article. “Mr. H and I had not been in the house more than a couple of days when we felt very depressed,” she wrote. The floors were covered with thick carpets that absorbed all sound of the family’s servants going about their tasks, and Mrs. H found the quiet a little overpowering. But even more disturbing than the silent footsteps of the people who were in the house were the noisy footsteps of people who weren’t there…or at least could not be seen with the naked eye.

“One morning, I heard footsteps in the room over my head,” Mrs. H recounted. “I hurried up the stairs. To my surprise, the room was empty. I passed into the next room, and then into all the rooms on that floor, and then to the floor above, to find that I was the only person in that part of the house.”

YOU ARE BEING WATCHED

The house’s strange power seemed to grow over time. Soon the entire family began to suffer from headaches and exhaustion, yet whenever family members took to their beds to regain their strength, the headaches and fatigue only grew worse. The children were affected most of all: They were pale much of the time, often felt tired and ill, and had poor appetites.

No part of the house offered refuge: When Mr. H sat in the dining room, he was so overcome by the sense of an unseen presence standing right behind him that he began turning his chair to face the hallway so that he would see anyone who tried to sneak up. The children developed an aversion to spending time in their playroom on the top floor of the house, Mrs. H. remembered: “In spite of their rocking horse and toys being there, they begged to be allowed to play in their bedroom.”

By December Mrs. H and the children were so worn out that she decided to take them on a short vacation while Mr. H remained at home. The break worked wonders for Mrs. H and the kids, but poor Mr. H was more tormented than ever. Strange and unexplained noises disturbed his sleep at night, making it impossible for him to get any rest. “Several times he was awakened by a bell ringing, but on going to the front and back doors, he could find no one at either,” Mrs. H said. “Also several times he was awakened by what he thought was the telephone bell. One night he was roused by hearing the fire department dashing up the street and coming to a stop nearby. He hurried to the window and found the street quiet and deserted.”

In early January, Mrs. H and the children returned home, but no sooner were they back inside the house that the trouble started again. The children came down with colds—which normally would necessitate remaining indoors, especially in the winter. But their symptoms seem to lessen when they went outside, only to recur when they came back into the house. Soon Mrs. H, like her husband, was awakened at night by strange noises—the sounds of doors slamming, pots and pans being thrown around the kitchen, and heavy footsteps climbing a staircase behind the wall in her bedroom. “There was no staircase behind the wall,” Mrs. H. wrote.

The live-in servants weren’t spared the house’s torments, either. During the day they had the feeling that someone—or something—was following right behind them, on the verge of reaching out and grabbing them as they went about their duties. At night they, too, were awakened by strange noises: tinkling and rattling china, heavy footsteps walking on the upstairs floors, and furniture being dragged across floors and shoved up against doors.
Then came the apparitions.

According to Dr. William Wilmer’s account, everyone in the H family had heard unexplainable noises and sensed eerie presences, but no one had actually seen any ghosts… until January 1913. Mrs. H saw them first: “On one occasion, in the middle of the morning, as I passed from the drawing room into the dining room, I was surprised to see at the further end of the drawing room, coming towards me, a strange woman, dark haired and dressed in black. As I walked steadily on into the dining room to meet her, she disappeared,” she wrote. “This happened three different times.” Another night one of the servants awoke to see an old man and a young woman sitting at the foot of her bed, staring at her. She lay in bed paralyzed until an unseen hand tapped her shoulder and she was suddenly able to sit up. But as she did so, the man and woman vanished.

One night Mr. and Mrs. H went to the opera, leaving their children in the care of the servants. That evening at about 8:30, the H’s young son was awakened by the ghost of a “big, fat man” that sent him screaming from his room. The boy spent the rest of the night sleeping fitfully in the nanny’s room, and when he awoke the following morning he complained that someone or something heavy—perhaps the fat man?—had sat on his chest the entire night, making it difficult for him to breathe.

FROM BED TO WORSE

Mr. and Mrs. H fared no better: After they returned home from the opera and went to bed, Mr. H was awakened by the sensation of ghostly fingers grabbing his throat and trying to strangle him. He still heard ringing bells at night, and now they were complemented by the sounds of people moving through the house. He assumed the noises were made by burglars, but every time he got up to confront the intruders, they were nowhere to be seen. And, Mrs. H wrote,“it was about this time my houseplants died.”

YOU ARE NOT ALONE

If only one person had seen or heard unusual things in the house, they could easily have been dismissed as the figments of an overactive imagination. But everyone in the house was now seeing, hearing, and even feeling things. And besides: You can’t kill houseplants with figments of someone’s imagination.

Whatever was happening in the house, it was very real. When they contacted the home’s previous residents, the H’s learned that the bizarre events had been going on for many years. “The last occupants we found had exactly the same experiences as ourselves,” Mrs. H wrote, “with the exception that some of them had seen visions clad in purple and white crawling around their beds. Going back still further, we learned that almost everyone had felt ill and had been under the doctor’s care, although nothing very definite had been found the matter with them.”

SOMETHING IN THE AIR

The first hint of what might really be happening came in late January, after Mr. H described the terrifying goings-on to his brother. Brother H remembered an article he’d read years before, describing a family that had been tormented by the same kinds of sounds and visions that his brother described. Brother H suggested that perhaps Mr. H and his family were being poisoned.

Poisoned? Now, on top of everything else, the ghosts were poisoning them? No, Brother H explained: The article he’d read said the family in question had had a faulty heater that released large quantities of carbon monoxide gas into the home, and that all of the symptoms the family experienced—depression, fatigue, illness, strange noises and visions, the feeling of being watched and even touched by unseen people, even dead houseplants—were entirely consistent with carbon monoxide poisoning. Brother H suggested they contact a doctor.

In those days doctors still made house calls, so the following day when the physician came by to examine the H family, he also took a look around their home. As soon as he examined the old furnace in the basement, his suspicions—and those of Brother H—were confirmed. “He found the furnace in very bad condition, the combustion being imperfect, the fumes, instead of going up the chimney, were pouring gases of carbon monoxide into our rooms,” Mrs. H reported. “He advised us not to let the children sleep in the house another night. If they did, he said we might find in the morning that some of them would never wake again.”

Unlike most ghost stories, this one ends with the family living happily ever after. Mr. and Mrs. H took the doctor’s advice and moved out of the house until the furnace could be repaired. When they moved back in, the eerie sights and sounds…were gone.

A lot has changed since 1912, but one thing hasn’t: Carbon monoxide poisoning is still the leading cause of accidental poisoning deaths in North America. The reason it’s so deadly is that carbon monoxide is odorless and tasteless, and it doesn’t irritate your airways when you breathe it. That makes it very difficult to detect, and a concentration of as little as 400 parts per million can be fatal. Often the first sign that something is wrong with the air is when someone loses consciousness.

From time to time, modern carbon monoxide ghost stories still find their way into print. An article in a 2005 issue of the American Journal of Emergency Medicine, for example, describes the case of a 23-year-old woman who collapsed while taking a shower after she saw what she thought was a ghost. The problem was traced to a new gas water heater, which had not been properly installed and was leaking carbon monoxide into her home. 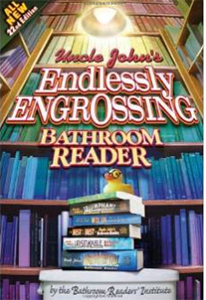 This article is reprinted with permission from Uncle John’s Endlessly Engrossing Bathroom Reader. This 22nd edition of the wildly popular Uncle John’s Bathroom Reader series is jam-packed with their trademark mix of humor and interesting facts. Where else could you learn about the lost cloud people of Peru, the world’s first detective, and the history of surfing?