February 8, 2017 Karl Smallwood
Jason H. asks: How does an Islamic person know where to face when they’re in space and supposed to be praying towards Mecca? 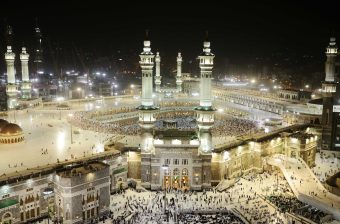 The first Muslim person in space was Royal Saudi Air Force pilot Sultan bin Salman bin Abdulaziz Al Saud in 1985 aboard the United States shuttle Discovery. He was followed up by the first Muslimah in space, Anousheh Ansari, who, upon immigrating to America from Iran in her teens subsequently got a degree in electrical engineering and computer science and then, not long after, cashed in her life-savings to co-found Telecom Technologies Inc. The result of all this was Ansari eventually amassing a personal fortune of about $750 million, becoming one of the wealthiest women in the world.

Using some of this self-made fortune, in 2006 she paid an undisclosed sum- speculated to be about $20 million- to buy an 8 day stay aboard the International Space Station, where she helped out with various experiments during her stay and in her spare time became the first person to publish a blog post from space. (You can read more about her remarkable story in her book My Dream of Stars: From Daughter of Iran to Space Pioneer.)

However, as far as we can find, the issue of how these two, from a practical standpoint, should adhere to certain facets of their religion while slipping the surly bonds of Earth never came up, at least not publicly. This all changed in 2007 when Malaysian-born Muslim astronaut and orthopaedic surgeon Dr. Sheikh Muszaphar Shukor mused about how exactly he’d pray towards Mecca while orbiting the Earth at about 17,136 mph (27,577 km/hr), as well as what the proper protocol was for him given part of his stay in space would fall on Ramadan.

To answer Shukor’s question and set out general guidelines for future Islamic space travelers, Malaysian National Space Agency and the Department of Islamic Development invited 150 Muslim scholars and academics to a two day conference to determine exactly how a devout Muslim should practise their faith in space.

For anyone unfamiliar, the Quran stipulates that a Muslim must utter a short prayer (known as the Salat) five times a day- once before dawn, once at midday, once in the late afternoon, once in the evening and once after sundown. In addition, Muslims are asked to “Turn then thy face towards the Sacred Mosque: wherever ye are, turn your faces towards it…” (The Quran, Al-Baqarah, 2:149) 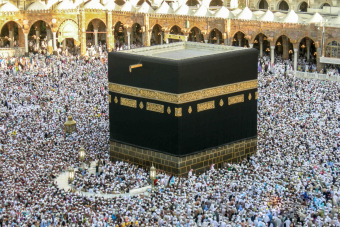 In regards to the first stipulation, the question arose- how exactly does said individual define when the morning even is when a manned craft orbiting the planet will do so approximately 16 times in a 24 hour period? Is the morning when the sun rises according to the individual’s perspective from the window of the spaceship? So in that case, if one was to follow the word of the Quran literally, a Muslim astronaut would technically have to pray 80 times per 24 hours, or once every 18 minutes. This would obviously be impractical given how full astronauts’ schedules typically are. Likewise, it would be exceptionally difficult for said individual to continually face Mecca as the Earth rapidly spins below the astronaut.

Lucky for Shukor and future Muslim space travelers, all of these issues, along with countless others, now have answers thanks to the aforementioned meeting of Islamic scholars who drafted what they called A Guideline of Performing Ibadah at the International Space Station.

For example, Muslims in space, rather than praying based on sunrise/sunset schedules from their perspective, are instructed to pray according to the day cycle of the last place on Earth they were located, which for Shukor was at the launch site in Baikonur in Kazakhstan. In the event prayer would interrupt an astronaut’s duties, the guideline explains that a Muslim astronaut can forgo or shorten their prayers and say longer ones when they have the time. As for Shukor, he rang in on this very note, stating, “I am Islamic, but my main priority is more of conducting experiments.”

As for deciding where Mecca is and continually facing it during the duration of the prayer, a Muslim astronaut is simply asked to use their best judgement with said religious scholars agreeing that as long as an earnest attempt is made by an astronaut to face Mecca as prayer begins there should be no religious issue. The specific guideline in determining the direction state,

Qibla direction is based on what is possible, prioritizing as below:
i.The Ka’aba
ii.The projection of Ka’aba
iii.The Earth
iv. Wherever

Yes, if one cannot otherwise even determine the direction of the Earth itself, then facing “wherever” is acceptable.   As Dr. Khaleel Mohammed of San Diego State University explained,

In space, the ritual prayer might be offset for more of a prayer that is allowed when on jihad … for the lack of gravity and directional accuracy makes it legitimate to do as one sees fit. God does not take a person to task for that which is beyond his/her ability to work with.

Other issues addressed include what a space-faring Muslim should do in-lieu of standing, bowing, prostrating, and repeating while praying- a difficult thing to pull off while in a state of perpetual free-fall around the Earth. The solution is to prioritize as follows:

a. If upright standing is not possible, then any standing posture,
b. Sitting. Bowing is by bringing  down the chin closer to the  knee or the prostrating place,
c. Lying down on the right side with body facing the direction of Qibla,
d. Lying flat
e. Using the eye lid as an indicator of the changing of postures in prayer,
f. Imagining the sequence of prayer.

Again, this all just seems to be looking for a best effort here. And if no effort can produce the desired results, then simply imagining doing it is fine. This is largely because, to quote Dr. Kamal Abdali:

Prayer is not supposed to be a gymnastic exercise. One is supposed to concentrate on the prayer rather the exact orientation.

The pamphlet drafted by the Islamic scholars also outlines what to do if one’s trip in space coincides with Ramadan (which Shukor’s partially did), where it is required to fast from sunrise to sunset- the guide says this is largely up to the individual and they can choose to fast as usual using the same timescale as they pray to or, if necessary given the duties at hand, forgo the fast and make up for it when they arrive back on Earth.

It’s also interesting to note that the document explicitly states that “travelling to space is encouraged” by Islam, as is the obligation of Muslims to “maintain sustainability of the space environment” and observe peace with all “other beings” one encounters in space- meaning the official policy of Islam, according to the 150 Islamic scholars who came up with the guide, requires Muslim astronauts to maintain peaceful relations with aliens, if any are ever encountered.