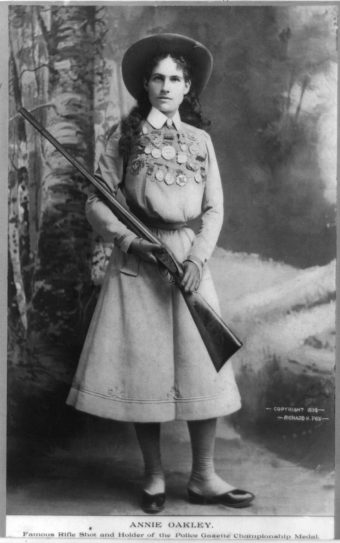 Phoebe Ann Moses, better known as “Annie Oakley,” made a name for herself as one of the best sharpshooters in the world throughout her lifetime. In the process, she overcame a childhood filled with abuse and adversity to become not only an enormously successful entertainer, but a role model for women and young girls.

Born in 1860, Annie’s father, Jacob, died of pneumonia when she was six years old. Her mother, Susan, briefly remarried, but her second husband likewise died shortly thereafter. Struggling to provide for her seven surviving children (she had nine total up to this point), Susan sent two of her children, the 8-10 year old Annie (her exact age at this time is not definitively known) and Sarah, off to the county “poor house,” called the Darke County Infirmary. From here, Annie was sent to work for a family she would later refer to simply as “the wolves.”

During her time in the wolf-den, she was severely abused and functioned as a virtual slave for the family. After two long years of this, she decided she’d had enough and fled back to the infirmary.  Supposedly the numerous scars on Annie’s back convinced Nancy Edington, the wife of the superintendent of the infirmary, to see to it that Annie was not sent back when the “he-wolf” came to collect her.  After he was sent away and told in no uncertain terms Annie would never be given back to him, Oakley later stated, “That night I slept untroubled for the first time in long months.”

Annie remained with the Edingtons for an unclear amount of time, learning to sew and make clothes until her mother married one Joseph Shaw, and she was able to return home. Not a financial burden at all, as it turns out, Annie almost immediately began supporting her poverty-stricken mother, step-father, and six surviving siblings by utilizing her talents with a gun. Beyond putting food on the table via shooting and trapping various game, she was also able to sell some of it to certain local businesses, earning enough money to pay off the approximately $200 mortgage (about $4500 today) on her mother’s small farm by age 15. Due to the somewhat unorthodox (particularly for the era) role the young teen took on as her family’s provider, Annie was forced to put her education on the back burner, rarely attending school. Perhaps because of this, later in life she made countless donations to charities that helped orphans and women in need get educated.

It was around this time (the exact date is disputed, either 1875, when Annie was 15, or 1880, when she was 20) that Annie entered a Thanksgiving Day shooting competition, going up against famed marksman Frank E. Butler, 13 years her senior. One by one Butler outshot the local competition, until he went up against Annie. She hit all 25 of her targets, while he only managed 24 of 25. Rather than be sore about losing to the young lady (and losing a $100 bet in the process, about $2200 today), he went the other way and started courting her. Less than a year later, the pair married, either in 1876 or 1881.

In 1885, the happy couple joined Buffalo Bill’s Wild West show. A small-time star on the vaudeville circuit up to this point, her time with Buffalo Bill’s show ultimately vaulted her into superstardom across the U.S. and parts of Europe, with her staple tricks including things like shooting a playing card edge on at great distance, then putting several bullet holes through its face as it flew wildly through the air to the ground; shooting out candle flames; and shooting cigarettes and cigars from her husband’s lips.

This brings us to 1898. Although women were making small strides toward equality, they were still a long ways off on countless fronts. Most pertinent to this article, women were forbidden to join the military in any potential combat role. That’s not to say none of them tried. By the 20th century, a handful of women, disguised as men, had joined U.S. war efforts in combat roles under false names. Once the disguised women were found out, however, they were immediately discharged, usually dishonorably.

The fact that women were highly discouraged from engaging with the enemy did not deter Annie Oakley. When it appeared that the United States was on the brink of war with Spain around the turn of the century, Annie offered her services to train a team of female sharpshooters for the war. In her letter to President McKinley, she wrote:

Dear Sir, I for one feel confident that your good judgment will carry America safely through without war. But in case of such an event I am ready to place a company of 50 lady sharpshooters at your disposal. Every one of them will be an American, and as they will furnish their own arms and ammunition, will be little, if any, expense to the government.

Whether or not Oakley received a response from the President or whether her offer went completely ignored is unclear, but the President certainly didn’t enlist Oakley’s help. 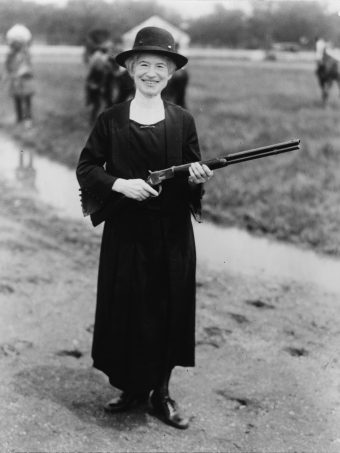 Oakley extended the same offer to the government during World War I, but again, the services of one of the greatest sharpshooters in the world were declined. Undeterred, Annie and her husband helped the war efforts by joining the National War Work Council of the Young Men’s Christian Association (YMCA) where the sharp-shooting couple held exhibitions and presented lectures at Army posts to help soldiers hone their shooting skills.

Despite her advanced years and being seriously injured in a car accident in 1922, Annie continued to perform and set various sharp shooting records almost up to her death in 1925 at the age of 66, dying of pernicious anemia. Her husband of approximately a half a century, Frank Butler, died just 18 days after her, supposedly refusing to eat anything after his wife’s death. The pair left behind almost nothing of the small fortune they’d accumulated in their lifetime, having previously donated the bulk of it to support various charities, particularly those focused on helping women and orphans.