Does the Ocean Continually Get Saltier?

September 13, 2016 Melissa
Gina A. asks: Is the ocean continually getting saltier as salt comes in from the rivers or is there some way that the salt gets moved back onto land? 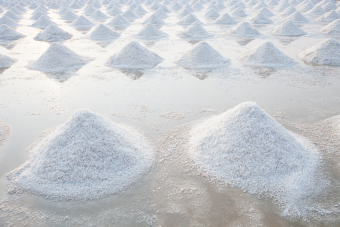 Most sea salts come from water-caused erosion, whereby rivers ultimately carry the dissolved salts to the oceans. Absent a few key processes, the ocean’s salinity would continuously increase; however, there are several mechanisms, called “salt sinks,” that help remove salts from the oceans at pretty much exactly the same rate as they are added.

One major sink is thanks to the evaporation of water. Once the seawater evaporates, the salt concentration increases. How does that remove salt from the water? Ultimately the water will become supersaturated in certain places and no longer capable of keeping all the salts dissolved, resulting in the formation of evaporite deposits in the sediment that eventually cement into sedimentary rocks.

A second, related sink, uses the wind to spray seawater back onto the land, where the water evaporates, leaving behind salt deposits.

Other sinks rely on chemical processes. For example, lava on the ocean floor will react with dissolved salt ions (like Mg2+), removing them from the water. In addition, certain clays absorb some salts (e.g. Mg2+ and K+), and some hydrogenous minerals, like ferromanganese nodules are also formed by using salts, all resulting in a decrease of ocean salinity. 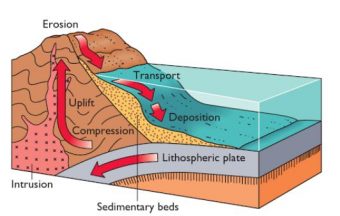 Sea life also help to remove salts from the ocean. Many animals ingest or otherwise extract salts from the water, and this can become incorporated into the organism, such as with a shell (from salts like Si4+ and Ca2+), or it can be excreted (read: pooped).  These fall to the ocean floor and become part of the layer of sediment there. Similar to evaporite minerals, these are eventually incorporated into sedimentary rocks.

Beyond salt sinks, freshwater from rivers, melting ice, and the like also supply a steady stream of comparatively fresh water to the oceans, helping to balance out the loss of water via evaporation.

Together, these inputs and outputs ultimately keep global ocean salinity in a relative state of equilibrium, though there are always regions of the oceans that are more or less salty depending on a variety of factors.

This may all seem somewhat fortuitous (particularly given how important ocean salinity level is to climate), but, in fact, this equilibrium is in no small part because the rate of salt removal from the ocean is directly related to its concentration- higher salinity = higher rates of removal via the aforementioned salt sinks and vice versa.

As a result, for at least the past 1.5 billion years or so the concentration of salts in global seawater has stayed relatively constant at 3.5%.

This, however, has begun to measurably change in the last half century, potentially with disastrous long term consequences if the trend continues. (More on this in the Bonus Facts below.)  If you guessed climate change has something to do with the decrease in ocean salinity, you get a gold star.