July 1, 2016 Dusti
This is a weekly wrap of our popular Daily Knowledge Newsletter. You can get that newsletter for free here. 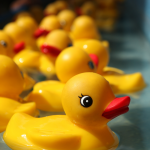 In 1970, everyone’s favorite orange roommate sang a song to his bathtime buddy. “Oh, rubber duckie, you’re the one. You make bathtime lots of fun,” cooed Ernie to his squeaky yellow friend. While the rubber duckie had been around for at least a century prior to Ernie and his mellow melody, this Sesame Street tune shoved the bathtime toy into the popular culture lexicon where it has remained ever since. From a chew toy to a piece of art to Ernie’s best friend (sorry, Bert), here’s the story of how the world got into the bath with the rubber duckie. In 1839, Charles Goodyear discovered vulcanized rubber. Legend has it that while in an argument with his lab partner, he angrily threw a piece of sulfur-covered rubber into a potbelly stove. The rubber charred and…(more) 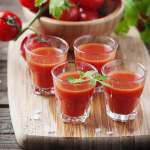 Who Invented the Bloody Mary Drink and Who Is It Really Named After?

For many, Sundays mean brunch and a delicious morning cocktail. Quite often, that early alcoholic beverage is the odd combination of tomato juice, celery, hot sauce, Worcestershire sauce (see: The Stomach Turning Thing Worcestershire Sauce is Made Of), vodka and other spices that’s known as a “Bloody Mary.” While admittedly it’s pretty tasty, the recipe isn’t exactly intuitively good. So, who and how was this smorgasbord of a beverage ever concocted? And was it actually named after a 16th century queen who had the habit of burning people at the stake? As the fifth of six children of Henry VIII and Catherine of Aragon (and the only one to survive infancy), Mary Tudor was pre-ordained as royalty when she was born in 1515. But it wasn’t easy for Mary, whose father had desperately wanted a son…(more) 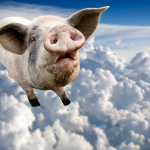 Imagine if you will that you’re sitting in an airport waiting to go on vacation. Suddenly and without warning you hear a voice over the tannoy system informing you that every single plane scheduled that day had been grounded. As your mind begins to think of all the horrible things that could have caused the delay, you hear the voice again informing you that flights have been grounded not by a freak storm, crash or technical glitch, but by an escaped flying pig. As unbelievable as it’s going to sound, this is genuinely something that once happened in London in the 1970s thanks to the band Pink Floyd and their gigantic pig shaped balloon. In 1976, Pink Floyd recorded an album called Animals which drew inspiration from the 1945 novel Animal Farm, a thinly veiled allegory of Soviet communism that prominently features pigs as characters. After the album was recorded, the band met with a design team called Hipgnosis…(more) 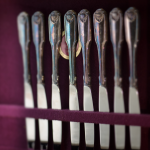 For many Americans in the 20th century, holiday meals meant getting out the special Oneida Silverware. Stainless steel, ornamental and moderately expensive, it wasn’t a fancy dinner unless there was a Silverplate Oneida spoon on the table. Despite its traditional look, the history of Oneida Silverware is anything but. The company was originally founded by a 19th century upstate New York religious community who believed in communist ideals (while simultaneously exploiting capitalism for their own benefit), women’s and workers’ rights, parents not being overly fond of their own children, and polyamorous relationships. Here now is the story behind the forks, spoons and knives that grandma puts on the table every Thanksgiving. John Humphrey Noyes was born to a financially comfortable family…(more) 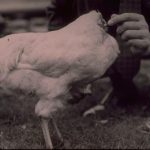 It turns out it’s not just politicians that can live without brains, a chicken named Mike lived without his entire head for 18 months! Mike the Headless Chicken was a Wyandotte chicken that was beheaded for the sake of providing a chicken dinner for the mother-in-law of a Fruita, CO farmer, on April 1945. Fortunately for Mike (or unfortunately depending on how you look at it) Lloyd Olsen’s axe barely missed the jugular vein, and left an ear and the majority of the bird’s brain stem unharmed. Unlike other chickens that run around like, well, chickens with their heads cut off, who are dead ducks, or chickens as it were, Mike shook off…(more) 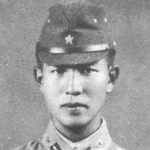 Hiroo Onoda is a Japanese citizen that originally worked at a Chinese trading company.  When he was 20 years old, he was called to join the Japanese army.  He promptly quit his job and headed off to training in Japan.  At a certain point in his training, he was chosen to be trained at Nakano School as an Imperial Army Intelligence Officer.  In this specialized military intelligence training, he was specifically taught methods of gathering intelligence and how to conduct guerrilla warfare.  He was being groomed to go in behind enemy lines and be left with small pockets of soldiers to make life miserable for Japan’s enemies and gather intelligence in the process. On December 26th, 1944, Onoda was sent to Lubang Island in the Philippines.  His orders from his commanding officers, Major Yoshimi Taniguchi, were simple:You are absolutely forbidden to die by your own hand. It may take three years, it may take five, but whatever happens, we’ll come back for you. Until then, so long as you have one soldier, you are to continue to lead him…(more) 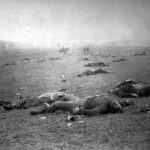 Marking the Confederacy’s last stab at a major offensive in a northern state, the three brutal days of fighting in July of 1863 around the town of Gettysburg, Pennsylvania mark the bloodiest battle of the American Civil War. Situated at the junction of 10 roads at a time when most places were served by one or two, and only about 30 miles from two key Union supply routes, it shouldn’t be surprising that Union and Confederate troops ran into each other there. What is surprising, however, is that many historians believe the battle played out the way it did because of a strong Confederate desire for new shoes. Leading up to the battle, on June 22, 1863, Confederate Major General Jubal Early had crossed the Potomac River at Shepherdstown, WV. Moving on to Chambersburg, PA, on June 25, Early received instructions from Lieutenant General Richard Ewell to move east through Gettysburg…(more) 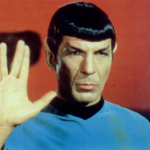 The hand gesture itself is a slight modification of the Hebrew gesture forming the letter “Shin”, which represents the name “Shaddai” meaning “Almighty” (God). This gesture is still used today by orthodox Jews of the Kohanim, which are priests descended from Ahron by the patrilineal line. These Kohanim form a subset of the descendants of the priestly Levite tribe. The Kohanim use the Shin gesture during a blessing ceremony, the nesiat kapayim or the “Priestly Blessing”, that accompanies the prayer service. The actual Jewish blessing is done with both hands, not just one, extended outward. In this gesture, the arms are then held at a roughly 45 degree angle, level with the shoulders, as opposed to the completely vertical salute fashion in the “live long in prosper” version…(more)