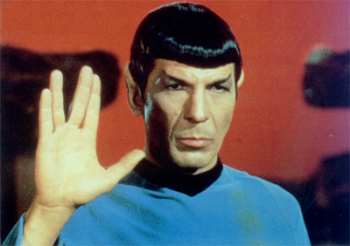 Today I found out the iconic “live long and prosper” hand gesture was originally a Jewish sign.

The hand gesture itself is a slight modification of the Hebrew gesture forming the letter “Shin”, which represents the name “Shaddai” meaning “Almighty” (God).  This gesture is still used today by orthodox Jews of the Kohanim, which are priests descended from Ahron by the patrilineal line.  These Kohanim form a subset of the descendants of the priestly Levite tribe.

The Kohanim use the Shin gesture during a blessing ceremony, the nesiat kapayim or the “Priestly Blessing”, that accompanies the prayer service.  The actual Jewish blessing is done with both hands, not just one, extended outward.  In this gesture, the arms are then held at a roughly 45 degree angle, level with the shoulders, as opposed to the completely vertical salute fashion in the “live long in prosper” version of the gesture.

This modified gesture used by Star Trek’s Vulcan’s was originally Leonard Nimoy’s idea.  Though Nimoy was not an orthodox Jew himself, when he was a child, his grandfather would take him to the synagogue.  During his time there, he observed this blessing and subsequent gesture and, according to his autobiography, was very impressed by the ceremony; remembering it later while filming “Amok Time”, which is the first place the now iconic gesture appeared in Star Trek.

In “Amok Time”, Spock was originally supposed to kneel before the Vulcan matriarch, with the matriarch placing her hands on his shoulders in a knighting type gesture.  Nimoy didn’t like this as Vulcan’s were touch telepaths.  Thus, he felt this original gesture would be an invasion of privacy for a Vulcan.   He then drew on his Jewish roots to come up with an alternate gesture.

The hand gesture itself wasn’t the only part that was borrowed from Jewish tradition.  The “live long and prosper” and the lesser known Vulcan traditional response of “peace and long life” was based on the Jewish “Shalom Aleichem” (peace be upon you) and the traditional reply of “Aleichem Shalom” (upon you be peace).