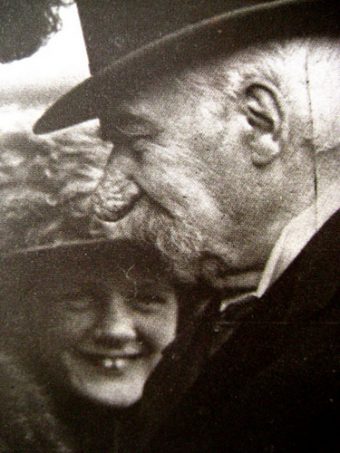 John “J.P.” Morgan is a name synonymous with business. A man who was so respected and influential in the spheres of business and finance that the appearance of the guy on the Monopoly board, Rich Uncle Pennybags, is thought to be based on him. But rather than talk about how Morgan accumulated his truly vast amount of wealth, how he was such a powerful force in the world of finance that he once rescued the United States government from bankruptcy in 1893; or that time in 1907 when he managed to stop cold the Wall Street Panic of 1907 which might have otherwise plunged the U.S. into a Depression (and the result of which inspired the creation of the Federal Reserve System, for when someone like J.P. Morgan wasn’t around to fix the situation); or that time he financed Thomas Edison in the invention of a commercially viable light bulb and helped form General Electric; or any of the other of his countless history changing business conquests, no, we’re going to talk about something much less well known about this admiral of industry- his giant nose.

Now given the list of accomplishments attributed to Morgan and the ridiculous amount of power he wielded during his lifetime to the point that the President of the United States was called his lapdog and nicknames in the finance industry for the man included Zeus and Jupiter, it may seem a little odd that we want to talk about his nose; so let us explain. Morgan didn’t just have a bulbous nose; it was also purple-ish/red because of a skin condition he suffered from as a child known as rosacea. This causes the blood vessels in the face to dilate and rupture. In addition to this, Morgan also suffered from rhinophyma, which is a common side effect of rosacea, resulting in numerous growths, lesions and fissures also marking the surface of his nose. But here’s the thing, almost nobody in America during Morgan’s lifetime was aware of any of this- impressive considering he was one of the most famous business magnates in the world for a not insignificant portion of his life. 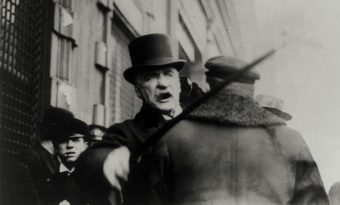 Morgan was largely able to avoid having the general public know about his condition by being absolutely terrifying both in private and public. Standing at an intimidating 6 ft 2 inches tall (the average male height in the U.S. at the time was 5’7″ or 170 cm, and in Europe 5’5″ or 165 cm) with massive shoulders and piercing eyes some have likened to those a magpie, few people dared approach Morgan in public and fewer still dared to do so with a camera out of fear Morgan would quite literally attempt to beat them half to death in the street. This may sound like hyperbole, but Morgan was known to violently lash out at anyone who attempted to take his photo without his permission, so much so that one of the few unofficial pictures we have of him actually shows him in the middle of swinging his walking stick at the cameraman’s face.

While conducting business Morgan was decidedly less violent, but was still feared by those who had to deal with him due to his infamously short temper. Morgan hated long meetings and would often seemingly make snap judgements about business deals and people, sometimes throwing the latter out of his office mere seconds after meeting them. This habit earned Morgan the nickname “Yes-or-No Morgan” amongst his peers.

Though many assumed this was simply a result of Morgan’s temper, behind the scenes he had his staff meticulously research anyone who wished to meet with him and what exactly they were going to be presenting him with so that by the time they shook hands, he already knew a lot about them and had made himself an expert on whatever venture they would be proposing; thus, he was really just looking to size the individual up in person before agreeing to some deal or tossing them out. Supposedly Morgan started doing this as a result of a shady business deal he financed during the American Civil War that came to be known as the Hall Carbine Affair, the unscrupulous nature of which Morgan purportedly had been ignorant of- he had simply lent one Simon Stevens the $20,000 (a little over half a million dollars today) to move forward with the scheme.

(Speaking of the Civil War, Morgan himself never took part, instead paying a substitute to take his place. The cost? $300, about $9,000 today, or roughly the amount of money Morgan spent on a single order of cigars, which he smoked dozens of every day.)

Outside of countless extramarital affairs (his first wife, Amelia “Mimi” Sturges, “the only woman he ever loved” died of tuberculosis within four months of their marriage; his second, Frances Louisa Tracy, he wasn’t so loyal to), Morgan was known as a man of impeccable moral integrity as a result of his deeply religious beliefs. He was also famous for his hands-on approach to business, often insisting on personally meeting with anyone who wished to deal in any significant way with any of his many business holdings. In these meetings, Morgan would use his towering frame and reputation to squarely address prospective business partners, making unflinching eye contact the entire time- a refusal to hold his gaze was seen as weakness by Morgan and meetings where a person failed to shake his hand in a satisfactory manner rarely lasted long. 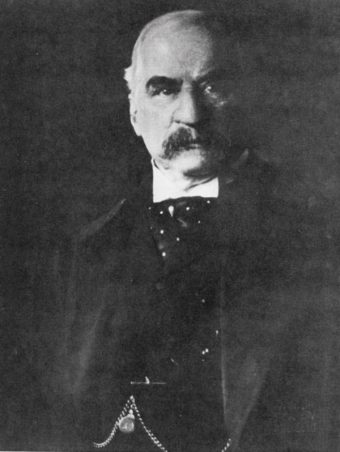 Back to his visage, Morgan intensely disliked having his portrait painted, due to both his self-consciousness about his nose (something he required be touched up in all photographs and paintings to appear more normal) as well as the fact that he simply didn’t like sitting still doing nothing. As a result, portrait painters often used a picture of Morgan he would intensely scrutinise beforehand. A notable example of this occurred in 1903 when an artist called Fedor Encke hired a young photographer by the name of Edward Steichen to take a picture of the business titan to help him complete a portrait he had been commissioned to create. Steichen spent hours perfecting the lighting for the resulting shoot, using a janitor with a similar build to the tycoon to sit in for Morgan who himself agreed to turn up for only a grand total of 5 minutes. The eventual shoot lasted only 3 minutes, the efficiency of which inspired Morgan to exclaim to Steichen, “I like you, young man!”

According to Steichen, Morgan turned up to the shoot and without saying a word, sat in the chair positioned in the middle of the room and struck a dignified pose; Steichen obliged and took a photo before saying something that would define his later career- “Would you mind moving your head?” Morgan answer the question with a withering glare that Steichen managed to quickly capture with a second photo before Morgan could change his expression. Morgan then stood up, paid Steichen $500 (about $13,000  today) and after a brief exchange, left. 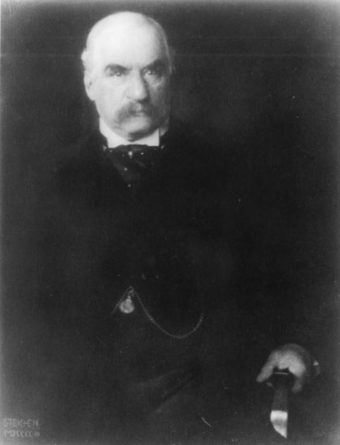 Knowing Morgan’s sensitivity about his nose, Steichen touched up the two photos as best he could to make the protuberance look more normal, then took the photos to Morgan to show him the result. Morgan loved the first, ordering a dozen copies and ordering that Fedor Encke use it as the basis of the aforementioned portrait. The second photo, however, was much closer to the stereotypical idea of J.P. Morgan- the ruthless robber baron. In fact, whereas the first photo showed Morgan as a dignified businessman, the second literally made him look like he was about the stab someone. You see, beyond his stern expression, it looked like he was holding a knife in his hand thanks to a quirk of the lighting which made the arm of the chair Morgan was holding look like a small dagger.

Morgan hated the photo and tore up the first copy he saw on the spot before throwing Steichen out of his office. Perhaps in an attempt to make sure the photo never saw the light of day, Morgan offered the photographer $5,000 ($130,000 today) for the original print, which he never sold, as a way of annoying the banking behemoth for being so rude to him. When Morgan eventually requested copies of that second photo, Steichen agreed to send them over, but delayed doing so for three full years. As he said, this was “my rather childish way of getting even with [him] for tearing up that first proof.”

In the end, Morgan died with virtually nobody outside of his circle of friends and those he did face-to-face business with knowing how he truly looked, and it took years for actual, untouched photos of the man to surface publicly- so tightly had he controlled his image.

Beyond controlling how people saw him visually, unfortunately for those of us who love history, Morgan’s love of privacy also inspired him to, shortly before his death, burn thousands of letters he wrote, including just over 30 years worth of weekly letters to his father in England concerning the state of business and politics in the United States starting in the 1850s- letters which otherwise would have been a veritable treasure-trove of firsthand accounts and insights on business and politics in the United States from one of the greatest businessmen in history.