Why We Say “Sic ’em” to Get Dogs to Attack 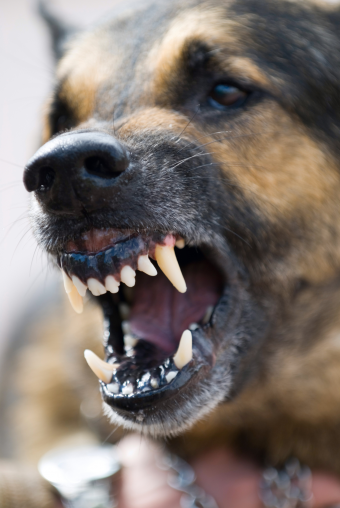 People have been telling dogs to “sic ’em,” with the intent to have the dog attack individual(s), since at least the nineteenth century. While this may seem odd given common modern definitions for “sick” or the variant “sic,” at the time this command popped up, it made perfect sense.

“Sick,” in this context, had nothing to do with the word meaning “ill,” but rather was simply a dialectal variant of “seek,” which used to sometimes carry the connotation of seeking with the intent to attack. (This sense of the word “seek” was used as far back as around AD 1000 in the work, Beowulf.)

The first known instance of someone instructing a dog to attack someone using this “sick” command occurred in Johnson J. Hooper’s 1845 Adventures of Capt. Simon Suggs:

You may well say that: what I tells them to do they do—and if I was to sick them on your old hoss yonder, they’d eat him up afore you could say Jack Roberson. And it’s jist what I shall do, if you try to pry into my consarns…

And later in that same work,

“Here, Bull!” shouted the widow, “sick him, Pomp!” but we cantered off, unwounded, fortunately, by the fangs of Bull and Pomp, who kept up the chase as long as they could hear the cheering voice of their mistress—“Si-c-k, Pomp—sick, sick, si-c-k him, Bull—suboy! suboy! suboy!”

As to how that became such a popular way to tell a dog to attack, rather than to simply say “attack,” or something similar, this isn’t known but makes sense given the types of sounds dogs are able to pick out most easily from normal human speech. (Think when you hear someone speaking a foreign language, it can at times just sound like a jumble of random sounds.)

Thus, when training a new dog (and a young child), most experts recommend “short, sharp commands.”  “Sic” certainly fulfills these requirements, being only one syllable and bookended by distinct sounds.  And while the “s” part of the word may seem to be a soft sound to human hearing, perhaps easily drowned out in some circumstances, dogs hear not only much better in range of frequencies than humans, but thanks to quite a bit of their brains being devoted to sounds, they are also better at discriminating between noises. So something like a “ssssss” sound ends up being relatively easy to pick out from other human language to start a command, at least more so than something like an “ah,” and the hard “k” sound at the end is easily distinguishable to finish it.