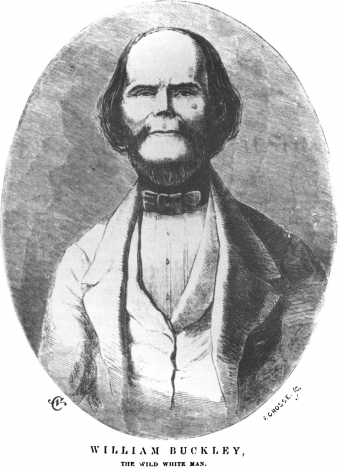 The records of William Buckley’s early life are vague at best. Even Buckley himself stated that he did not remember much of it. What is known is that Buckley was born sometime in 1780, most likely in Marton, Cheshire, England. His parents had three other children, two girls and another boy, and his maternal grandfather was raising Buckley by his sixth birthday. Originally apprenticed to a bricklayer, his life may have turned out differently had he continued on that career path. But a young Buckley ran away from his apprenticeship in order to join the King’s Foot Regiment and later the King’s Own Regiment.

His military career included travel to the Netherlands in 1799 with his regiment under the command of the Duke of York to fight against Napoleon’s forces. However, like his brief career as an apprentice bricklayer, Buckley did not last long as a soldier. But this time, he didn’t leave by choice. In August of 1802, he was accused and convicted of knowingly accepting a bolt of stolen cloth from a woman.

Buckley maintained his innocence later in life, explaining, “One day, crossing the Barrack Yard where our regiment was quartered, a woman whom I did not know requested me to carry a piece of cloth to a woman of the Garrison to be made up [into clothing]. I was stopped with it in my possession, the property had been stolen. I was considered a thief and though innocent sentenced to transportation.”

After being convicted, Buckley found himself aboard the HMS Calcutta in April of 1803, heading off to Australia to serve a fourteen year prison sentence.

Then Lieutenant-Governor David Collins led the crew of the Calcutta and was tasked with overseeing both the convicts and the new settlement at Sullivan’s Bay. However, neither he nor the British government realized the extent of the inhospitable environment. Sullivan’s Bay lacked sufficient fresh water and had poor soil for farming. In addition, it was also relatively isolated from other British settlements in the region. As a result of this, Collins decided after a few short months to abandon the area and relocate the convicts to a new settlement in Van Dienmen’s Land, now Tasmania, starting in January 1804.

Seeing an opportunity in the move, Buckley and a number of other convicts decided to try to escape. They stole medical supplies, a gun, and boots from their guards on Christmas Eve in 1803 when the officers were partaking in drinks and less attentive to their prisoners. On the evening of December 27th, they decided the time was right and made their run for it. During the escape attempt, one prisoner was shot and left behind, but Buckley and several others managed to make it safely into the Australian bush.

The escaped convicts walked around most of Port Phillip Bay, surviving on shellfish and select plants. Their goal was to reach Sydney, Australia, which they thought would be a relatively short journey but in fact was nearly one thousand kilometers away. Beyond the inherent danger of trekking through the Australian wilderness with little in the way of supplies, the near-constant fear of being attacked by Aboriginal tribes took a toll on the men, and all but Buckley ultimately decided to head back to the relative safety of the settlement at Sullivan’s Bay. Buckley refused, later stating, “…to all their entreaties to accompany them I turned a deaf ear, being determined to endure every kind of suffering rather than again surrender my liberty.”

It was later reported that none of his companions returned to Sullivan’s Bay and, at least if Buckley’s account is to be believed, they most likely died on their way back.  Buckley, too, was also reported to have perished in the wilderness.

Not dead at all, Buckley, continued on his journey towards Sydney.

Despite doing his best to avoid contact with Aboriginal tribesmen, Buckley later told biographer George Langhorne in 1835 that he met an Aboriginal family on the beach during his wanderings. The family took him in, beginning to teach him their language and feeding him. He claimed that he paid the family back by performing manual labor.

Eventually he decided to travel farther inland, and he left the Aboriginal family behind. This was when he made a fateful decision that probably saved his life. While contemporary accounts differ as to where exactly it happened, at a certain point Buckley stumbled upon a grave with a spear stuck in the ground. The grave was that of Murrangurk, a warrior of the Aboriginal tribe Wathaurong.  In need of a good weapon and walking stick, Buckley took the spear from the grave.

When women of the Wathaurong tribe later encountered Buckley, they recognized the spear. Buckley later shared his account of the meeting with the women:

[The Wathaurong Aboriginals] came up and viewing me for some time with evident astonishment at length made signs to me to follow them. I immediately did so although I despaired of my life as my impression was that they intended to kill me … on reaching a hut or ‘Willum’ near which was a Waterhole I made signs that I was thirsty and they gave me some water and without being asked offered me some gum beat up and prepared in their manner. They then all sat down and a general howling was set up around me the women crying  and sobbing…

Not wanting to kill him it at all, the Wathaurong tribesman believed Buckley was Murrangurk’s spirit returned and he was allowed to live in their community. He was even given a wife, with whom he later had a daughter. More important for historians, Buckley also had a front row seat to Aboriginal customs no white man had ever seen. He observed raids on other tribes where Wathaurong Aboriginals massacred men, women, and children and even cannibalized them. He also became an expert in their methods of fishing, hunting, and in using Aboriginal weapons. Beyond this, Buckley stated, “After a few years residence among the natives I could speak the language quite well – when I had attained this knowledge of their tongue, I was fast losing my own.”

For a little over three decades, he lived this way as a respected member of the tribe.

The exact nature of Buckley’s reunion with British settlers in July of 1835 is up for debate. In William Goodall’s contemporary account of Buckley’s life, it is reported that Buckley did not encounter any white settlers during his more than thirty years with the Wathaurong Aboriginals and so he was forced to stay with the tribe. On the other hand, in George Langhorne’s account of Buckley’s adventures, written just after Buckley left the Wathaurung tribe and thus considered a bit more accurate, he claims Buckley told him, “During 30 years residence among the natives I had become so reconciled to my singular lot – that although opportunities offered, and I sometimes thought of going with the Europeans I had heard were in Western Port, I never could make up my mind to leave the party to whom I had become attached…”

It has further been claimed that Buckley eventually decided to make his presence known to the Europeans after he overheard plans by the Wathaurong tribesmen to attack the white settlers, with Buckley deciding to intervene. 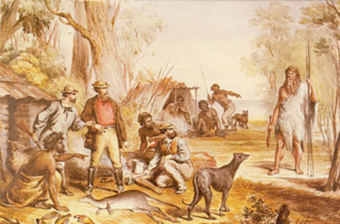 Whatever the case, in July of 1835, dressed as a Wathaurong, in kangaroo skins and carrying traditional weapons, the approximately six and a half foot tall Buckley entered the British camp with a group of Aboriginals. Buckley recounts, “I arrived in sight of a long pole, or staff, with the British colours hoisted upon it, and there I also saw a sort of camp. I now was overwhelmed with feelings connected with the past, the present, and the future.”

Initially struggling to remember how to speak in his native English and afraid of what the English might do to him if he told them who he really was, he first lied to the settlers by claiming to be a shipwrecked soldier. He later revealed his true identity, risking being re-arrested in the process. Instead, he received a pardon for his former crimes from the then-current Lieutenant Governor of Van Dienmen’s Land, with the settlers realizing how useful Buckley could be in smoothing over relations with the locals.

Towards this end, Buckley was given a salary and, among other things, worked as an interpreter in 1836.  Unfortunately for Buckley, he found it difficult to readjust to a European way of life and distrust from both the Aboriginals and Europeans, who both felt he was plotting against them with the other, left Buckley frustrated. George Langhorne noted of Buckley, “He appeared to me always discontented and dissatisfied and I believe it would have been a great relief to him if the settlement had been abandoned and he left alone with his sable friends.”

He left Melbourne two years later in 1838 and spent the rest of his life in Hobart. According to William Goodall, “When [Buckley] was taken away in the ship, the natives were much distressed at losing him, and when, some time after, they received a letter informing them of his marriage in Hobart town, they lost all hope of his return to them and grieved accordingly.”

Besides getting married for a second time, Buckley took various odd jobs such as gatekeeper at a prison for female convicts and as an assistant storekeeper. He lived to the ripe old age of seventy-six, dying in 1856 after falling out of a horse-drawn carriage.