Who Started the Red Carpet Tradition?

February 24, 2016 Melissa
David asks: When did the tradition of rolling out a red carpet for celebrities start? 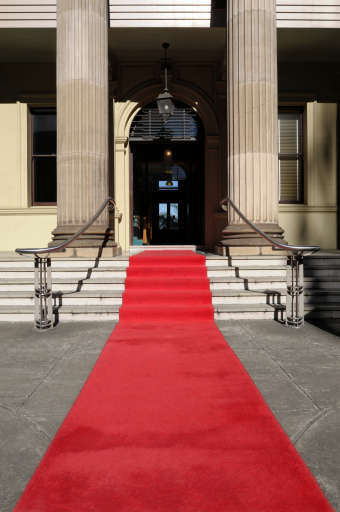 Throughout history, red carpets have led luminaries to momentous events, both good and bad.

Aeschylus (525 BC – 455 BC), the “father of tragedy,” wrote various plays where his heroes fell from grace due to a combination of unwinnable circumstances, arrogance and/or simply stepping on the gods’ toes.

A few years before his death, Aeschylus wrote Agamemnon, in which, after a ten-plus year absence from his kingdom of Mycenae, King Agamemnon returned home to his wife, Clytemnestra, triumphant from the Trojan War and dragging along his new concubine, Cassandra.

Clytemnestra was happy to see Agamemnon, but only because now she could seek her vengeance – not only for his new lady friend, but more particularly for his role in the death of their daughter, Iphigenia, a decade previous.

Just before the Greek fleet had sailed off to fight the Trojan War, Agamemnon killed one of the goddess Artemis’ deer, which enraged her, leading to Artemis’ interfering with the Greek fleet leaving. To appease her, Agamemnon was forced to sacrifice his oldest daughter, obviously without Clytemnestra’s consent.

So, by the time he arrived back in Mycenae, Clytemnestra was more than pleased to greet him; and, determined to make a show of it, she rolled (or more accurately spread) out a literal red carpet, marking the first known mention of such a thing. Ordering her ladies to make a path for Agamemnon to walk from his chariot to the palace doors, she stated:

You women . . . Spread out those tapestries, here on the ground, directly in his path [which shall] be covered all in red so Justice can lead him back into his home . . . .

Having already paid once for earlier hubris, Agamemnon was afraid of further angering the gods by taking on such airs:

Don’t invite envy to cross my path . . . That’s how we honor gods . . . For a mortal man to place his foot like this on rich embroidery is . . . not without some risk.

Eventually, however, he relented to Clytemnestra’s pestering, albeit after first removing his sandals, and walked barefoot on the red carpet that led him into his palace . . . and eventual doom (shortly after this, Clytemnestra stabbed him to death in the bathtub).

Whether it was fear of the wrath of the gods, or lack of sufficient textiles, there are few episodes recorded of other similar red carpet uses for the next 2,000 years, although it does seem to have occurred on occasion.

Fast-forwarding significantly through history, one notable example came in the early 1800s, when the fifth President of the United States, James Monroe (1753-1831), disembarked from a riverboat in Georgetown, SC, and his welcoming party greeted him with a ceremonial red carpet.

Again mostly disappearing into obscurity for awhile, the practice was revived in the early 1900s, this time by the New York Central Railroad, which rolled out the red carpet as part of the first class service given on its 20th Century Limited train.

Operating nightly from New York to Chicago from 1938 until 1968, passengers on the 20th Century Limited entered the train after following a path made by the plush, football field length, vibrantly red rug that spanned the length of the train- from the engine to the observation car.

The height of luxury at the time, overnight passengers of the 20th Century Limited left the NYC station at 6 p.m., enjoyed cocktails in the observation car, dinner in the dining car with views of the Hudson river, and a comfortable bed and breakfast on the train before disembarking the following morning at 8:45 a.m. in Chicago. The combination of luxury and the striking pathway is generally credited as being the inspiration for the phrase “red carpet treatment.”

Co-opting the cachet and opulence of the red carpet, showman and theater magnate Sid Grauman (of the now famous Chinese Theater in front of which celebrities still place their hands in wet cement) is widely credited with introducing the practice to Hollywood when he had a red carpet placed for the stars to follow at the premier of Robin Hood at his Egyptian Theatre in 1922.

Also needing a practical method of guiding its numerous stars through the throng on Oscar night, the Academy first placed a red carpet to lead celebrities from their cars to the Santa Monica Civil Auditorium in 1961.

By 1964, realizing the public’s interest in seeing more of Hollywood’s best and brightest, Oscar producers began spending more time on exterior shots of the stars walking the carpet. Nonetheless, even by the early 1960s, the red carpet was still little more than a trail to be followed.

This all changed in the 1970s, following Barbra Streisand’s sensational see-through pantsuit best actress acceptance speech in 1969, as celebrities began competing for the publicity and exposure afforded by the red carpet by exploring their fashion sense. Together with the introduction of People magazine, the award show red carpet was transformed into a fashion runway that was as accessible as the television in your living room.

The red carpet evolved again in the early 1990s when Joan and Melissa Rivers began their coverage of pre-award show fashion, beginning with the 1994 Golden Globes. Incorporating conversation and celebrity worship (and dishing) with fashion reporting, the E! reporters forever changed the ways stars entered these large events with the simple but pertinent question, “Who are you wearing?”

Today sporting the 360 degree GlamCam (which nearly instantly shows a star’s outfit from every angle), the fingernail-art highlighting Mani Cam and a cadre of perky, pretty and funny people cooing, cajoling and carping about fashion, modern red carpet events share little with their ancient ancestor, beyond perhaps at times being a remarkable display of hubris.