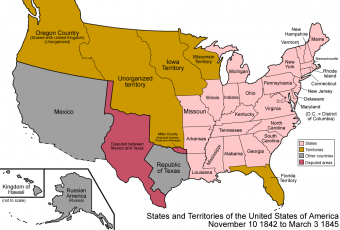 James K. Polk is one of those presidents that most people draw a complete blank on, like Fillmore or Hayes. He may not be high on the recognition scale, but Polk got things done- perhaps the only U.S. president to accomplish every major point he promised when campaigning for office, doing it all in just one term to boot. When he entered the White House, Oregon Territory was occupied jointly by the US and Great Britain, and the lower west quarter of what would become the United States belonged to Mexico. When his term ended, he’d expanded the United States to its current contiguous boundaries by strong-arming Great Britain and winning a war with Mexico.

On December 2, 1845, “Fifty-four forty or fight!” President James K. Polk made his first annual address to Congress. He took the opportunity to re-interpret the Monroe Doctrine in light of the new spirit of Manifest Destiny. Expanding the country “from sea to shining sea” was the name of the game.

Polk’s plan included pushing the US border south to the Rio Grande River in Texas, booting the Brits out of the Oregon territory, and taking over California- essentially, proposing potential war with major powers on multiple fronts all at the same time.

Even though Polk was worried about backlash from the likes of Great Britain, and felt they would attempt to thwart his attempts to control Texas and California as well, in the end they didn’t try very hard to stop the United States in their expansion efforts. Given that British citizens in Oregon were outnumbered at this point about 6 to 1 by U.S. citizens, Britain decided on a compromise instead of outright war, agreeing to split Oregon at the 49th parallel, a proposal the United States accepted. Mexico, however, was a different story.

War inevitably broke out between the two nations in 1846 when Polk sent American troops into the region. Under the command of Winfield Scott, the US Army marched inland from the Gulf of Mexico and ultimately defeated Santa Anna.

The end result was everything Polk had hoped for. For the low, low price of $15 million (about $400 million today), about half what the U.S. had offered before the war, Mexico handed over the territory that is now New Mexico, Utah, Arizona, Colorado, Nevada, and California. The contiguous boundaries (more or less) of the modern United States were now in place.