This Day in History: December 4th- The Million Dollar Quartet 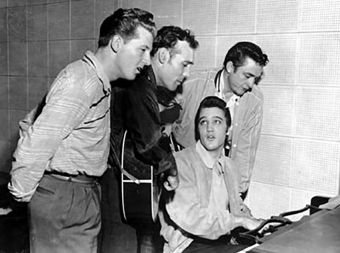 On December 4, 1956, one of the most famous and awe inspiring jam session in history occurred at Sun Records in Memphis, Tennessee. Four legendary performers happened to bump into one another, and, as musicians tend to do, sat down to play some tunes. They met completely by chance, the jam session was completely impromptu, and the resulting music was, not surprisingly, completely awesome.

The four musicians in question are the founding fathers of rockabilly and rock and roll.  Elvis Presley, Carl Perkins, Johnny Cash, and Jerry Lee Lewis were young, passionate and all at the top of their game. Though certain accounts differ, the events went down something like this.

Carl Perkins, riding high from the success of “Blue Suede Shoes”, was in the Sun Record Studios with his brothers Clayton and Jay on guitar and W.S. ‘Fluke’ Holland on drums. A recent addition to the Sun Records roster was brought in to add his talents on piano – and considering that the new guy was Jerry Lee Lewis, those talents were considerable.

In the early afternoon, Elvis Presley, a former Sun artist who had topped the charts five times and was at the time the most popular entertainer to ever curl a lip or shake a hip, stopped by to say hello to his old friends. He entered the control room to chat with Sun Records owner Sam Phillips, and then proceeded into the studio to mess around with the boys. Sam shrewdly left the tapes running to capture the event for posterity.

Just when you thought things couldn’t get any cooler, Johnny Cash showed up… or was already there (accounts by those present differ, which is no surprise given how bad we humans are at remembering pretty much everything and how susceptible we are to creating false, sometimes incredibly detailed, memories). As for Cash, he stated in his autobiography,

I was there – I was the first to arrive and the last to leave, contrary to what has been written – but I was just there to watch Carl record, which he did until mid-afternoon, when Elvis came in with his girlfriend. At that point the session stopped and we all started laughing and cutting up together. Then Elvis sat down at the piano, and we started singing gospel songs we all knew, then some Bill Monroe songs. Elvis wanted to hear songs Bill had written besides Blue Moon of Kentucky, and I knew the whole repertoire. So, again contrary to what some people have written, my voice is on the tape. It’s not obvious, because I was farthest away from the mic and I was singing a lot higher than I usually did in order to stay in key with Elvis, but I guarantee you, I’m there.

As Cash alluded to, the foursome went through bits and pieces of approximately 40 gospel and country numbers – the music that inspired their own. They played songs like “Peace in the Valley”, “Just A Little Talk With Jesus”, and “Crazy Arms”. Beyond that, they also played rock and roll hits of the day by Chuck Berry, Little Richard, and even Elvis himself.

Sam Phillips not only had the presence of mind to tape the slice of history going on in his studio, he also fetched a local photographer to capture a visual image of the momentous occasion. The now iconic photo of Elvis sitting at the piano flanked by Jerry Lee, Carl and Johnny accompanied an article in the Memphis Press-Scimitar reporting on the momentous chance meeting dubbed “The Million Dollar Quartet.”

When Shelby Singleton bought Sun Records from Sam Phillips in 1969, he unearthed the tapes from that legendary session and released some of the tracks in 1981 as a 17-track album.  In 1987, thanks to additional recordings of the session being found, The Complete Million Dollar Session was released.  Not actually complete, in 2006, yet another version was released containing an additional 12 minutes not heard in the 1987 edition, with this extra bit courtesy of Elvis’ copy of the recording sessions.  Although the sound quality leaves something to be desired on the sessions and most of the songs are incomplete versions, considering who the members of “The Million Dollar Quartet” were (and that they’d probably be more accurately dubbed “The Billion Dollar Quartet” today), few mind.