This Day in History: October 21st- The Game 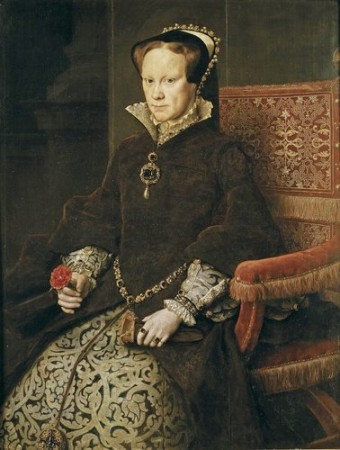 In July of 1554, Queen Mary I married Philip of Spain. The Queen was quite in love with her hunky new hubby. Unfortunately, many of her subjects didn’t share her affection, including Parliament who refused to recognize Philip as King on October 21, 1555. And this wasn’t the first or last time.

Mary Tudor’s life to that point had been less than ideal for the daughter of a monarch, thanks to the actions of her father, Henry VIII. Her mother, Catherine of Aragon, had been cast aside after almost twenty years of marriage for failing to produce a male heir – and because a certain woman named Anne Boleyn entered Henry’s orbit. (See: The Many Wives of King Henry VIII)

Since Mary refused to abandon her mother and her religion to side with her father, Henry made her life a misery. Ultimately mother and daughter were separated and they were not even allowed to exchange letters. To add insult to injury, Mary was stripped of her royal status and forced to act as a lady-in-waiting to Anne Boleyn’s daughter Elizabeth.

Mary’s future became even more uncertain when her staunchly Protestant half-brother took over. However, his reign didn’t last long. Towards the end of his short life, 15 year old Edward VI attempted to make sure his older sister wouldn’t take over once he was gone, for religious reasons initially hoping that honor would instead go to his Protestant sister Elizabeth. In the end, though, to disinherit Mary, he had to also disinherit Elizabeth, so that’s what he did. (Kid brothers, right?)

This ultimately led to Lady Jane Grey, regarded as one of the most well educated and intelligent young women of her day, being named heir by Edward on his death bed. He might as well have beheaded her himself, as it turns out. Lady Jane was briefly named Queen on July 10, 1553, but her strongest supporter, father-in-law John Dudley, the Duke of Northumberland, was forced to leave town with 1,500 soldiers to attempt to stop Mary before she gathered too much support for her own push for the crown. The Duke was unsuccessful and as Mary’s allies grew rapidly, the Privy Council saw where this was all going and, quite suddenly, changed their minds and decided Mary should be queen, naming Dudley a traitor and ending Jane’s nine day rule.  The French ambassador Antoine de Noailles wrote of the almost overnight switch in fortunes and support, “I have witnessed the most sudden change believable in men, and I believe that God alone worked it.”

The good Duke soon found himself missing a head and Lady Jane was convicted of high treason, but then spared.  However, this changed just a few months later with Wyatt’s rebellion of 1554 which Jane’s father and his two brothers took part. Although her part in her first “rebellion” against the true heir Mary was not exactly her doing, and she had nothing to do with the second rebellion that was put on her ledger, Jane nonetheless was convicted of treason and sentenced to death, losing her head in February of 1554, at the tender age of about 17.

And so it was that Mary took the throne. As her deceased younger brother feared, she almost immediately set to work re-establishing Catholicism in England – no matter the cost. And, of course, as she was in her late 30s, finding a suitable Catholic husband to beget Catholic heirs with was a time sensitive need.

Although her council did their best to encourage the Queen to marry an Englishman, Mary insisted on marrying Philip, the son of her cousin Charles V. A staunch Catholic ten years her junior, for Philip this union was nothing more than a political alliance. On the other hand, Mary was seemingly genuinely smitten with the handsome Spaniard.

Many in England were deeply distrustful of Philip and felt his presence spelt trouble for the Protestant cause. But Mary was reveling in her personal happiness and waited patiently for the signs of an heir in the making.

She didn’t have to wait long and she soon showed all the signs of pregnancy, including gaining weight, ceasing to menstruate, and having random bouts of nausea. But a strange thing happened.  Rather than giving birth nine months later, when the time came close for the baby to come, it didn’t and her “pregnancy” just went away. There must have been signs that the pregnancy wasn’t real because Philip wrote to his brother-in-law telling him he had some doubts as to whether his wife was really pregnant.  Venetian ambassador Giovanni Michieli also noted that the pregnancy was more likely to “end in wind rather than anything else.”

While it’s possible there was a miscarriage that was just never publicly divulged for some odd reason, most historians think this was simply an example of a False Pregnancy.

Whatever the case, Mary wasn’t happy about this, and knowing Philip was embroiled in numerous affairs in England and abroad did little to improve her flagging spirits. It seems that Mary may have funneled her frustration at her inability to have a child into religious fanaticism, blaming the loss of her supposed baby on God punishing her for not doing enough to rid England of heretics. She continued executing Protestants left and right; all total during her five year reign it’s thought that nearly 300 religious dissenters were burned at the stake.

Matters were not improved when her husband left for a couple years to deal with pressing issues in the Low Countries, leaving the near 40 year old Queen, who no doubt could hear her biological clock ticking a mile away at this point, to fend for herself in England. 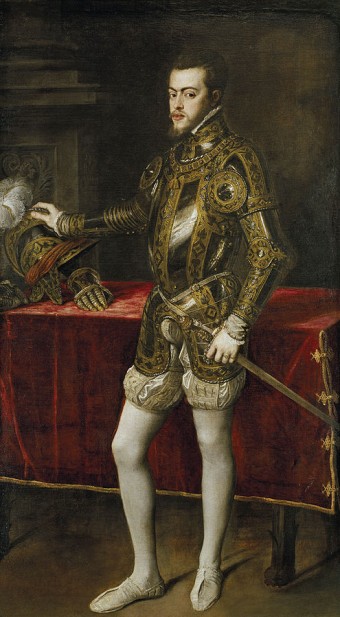 Philip returned in March of 1557 to raise English troops for the war, and by July he was off and running again. However, almost immediately after his return, Mary believed herself pregnant again, but as before no royal infant appeared by the following spring and the bereft Queen had to face the hard fact that she’d probably never have a child. She sank into a deep depression from which she never recovered, dying on November 17, 1558 during a flu epidemic at the age of 42.

Philip wasn’t in England when she passed away. After being informed of his wife’s death, he wrote in a letter to his sister, “I felt a reasonable regret for her death.” Now, that’s romance.

When Mary died, her half-sister Elizabeth ascended the throne and Philip wasted no time reminding her that he was now back in the marriage market, and had more experience than anyone alive at being married to a Queen of England.

The new Queen Elizabeth I, who was busy switching the country back to Protestant after the brief reign of her Catholic sister, wasn’t interested.