This Day in History: April 9th- The Would-Be King 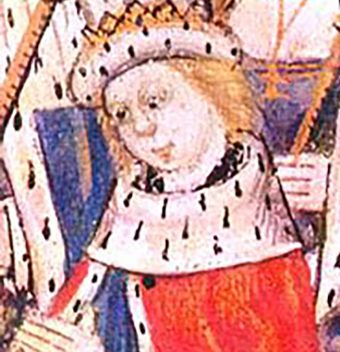 The War of the Roses between the House of York and the House of Lancaster over the English throne is no doubt one of the most notorious – and deadly – family feuds in human history. The participants were so self-serving and cold-hearted that the lives of two young boys were sacrificed to serve the ambitions of the older generation.

Edward V was born November 2, 1470, the elder son of Edward IV and Elizabeth Woodville. When his father died on April 9, 1483, the 12-year-old monarch departed from Ludlow Castle to make his way to London and his new life as King. His paternal uncle, Richard, Duke of Gloucester, had other ideas.

Gloucester, who had been chosen to be young Edward’s Guardian and Lord Protector by the late King, interrupted his progress while he was en route. Gloucester was accompanied by the Duke of Buckingham and a large group of armed men. The young King objected, but knew he had little choice but to acquiesce.

When word reached London of these developments, panic began to spread. The good Duke of Gloucester astutely assured the English people his only goal was to keep those social climbing Woodvilles from staging a coup. This satisfied most, as the widowed Queen’s family was heartily disliked by the people of England.

King Edward was brought to the Tower of London, supposedly to await his coronation. Nothing seemed odd about this at the time, as the Tower was also a royal residence as well as a prison and place of execution. Gloucester even convinced Elizabeth Woodville she was being a drama Queen by keeping her other son, the 10-year-old Richard, Duke of York cooped up in Westminster Abbey with her where she had sought sanctuary.

After all, his big brother would really enjoy the company. Elizabeth finally relented, and upon his arrival, the Duke of Gloucester had control of the heir and the spare.

Soon after, Gloucester had Lord Hastings by for a visit under the ruse of discussing the upcoming coronation. Hastings, who was very close to Edward VI, never would have sanctioned the disinheriting of his kids and Gloucester knew it. In the space of a day, Lord Hastings was arrested for treason and executed without a trial.

Then an old claim, that Edward IV was not a legitimate son of Richard, Duke of York was resurrected by the Duke of Buckingham. He also asserted that Edward IV’s marriage to Elizabeth Woodville wasn’t valid as he was pre-contracted to someone else, obviously believing the theory that if you fling enough muck, something is bound to stick.

Buckingham then called upon The Duke of Gloucester to ascend the throne as the true heir of York and England’s rightful King. Gloucester, of course, appeared outwardly hesitant to do so. But before you could say “mission accomplished”, he was proclaiming himself Richard III.

The two young princes, who had previously been seen playing in the gardens of the Tower, were observed doing so less and less frequently. By the summer of 1483, they were seen no more.

The accepted story for the past five centuries has been the obvious one – the boys were murdered on the order of their uncle Richard. The Tudor humanist scholar Thomas More certainly believed this to be the case; he relates that both the boys were smothered with pillows and buried beneath a staircase in the Tower on King Richard’s orders.

Modern apologists for Richard say this is partisan Tudor propaganda, and Henry VII, the first Tudor monarch, could have been responsible for the princes’ demise. It would certainly explain why he ordered his mother-in-law Elizabeth Woodville to a nunnery (he married the younger sister of the princes, another Elizabeth, uniting the houses of York and Lancaster.)

Some speculate Henry VII did this to ensure her silence because she discovered his secret. Possible, but most still believe it was Good ol’ Uncle Richard who did the two young princes in.