This Day in History: October 13th- Not Country Enough 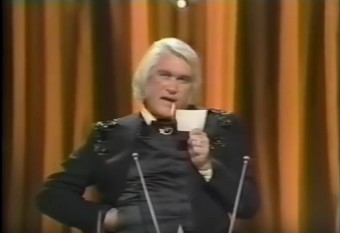 If the kids today think Kanye West invented behaving badly at awards ceremonies when he interrupted Taylor Swift’s acceptance speech at the 2009 VMAs – they are sadly mistaken. At the Country Music Awards held on October 13, 1975, Charlie Rich, the reigning CMA “Entertainer of the Year,” caused quite the ruckus announcing the new honoree, John Denver.

A swaying Rich, who had enjoyed a great many gin and tonics prior to that moment, stood behind the podium and slurred his way through the nominations. He finally clumsily ripped the envelope open, pulled a Zippo from his pocket and set fire to the card with a sardonic smile, revealing the winner as: “My friend, Mr. John Denver!” Mercifully, Denver was appearing from Australia via satellite and happily accepted the honor without a clue about what just transpired.

So just what message was Charlie Rich trying to convey?

Much of it had to do with country music’s old guard resenting the influx of what they considered watered-down, sell-out pop artists who had no business calling themselves Country. At the 1974 CMAs, Charlie Rich had won for “Entertainer of the Year” – and certainly no-one would argue his country music cred. On the other hand, the “Female Vocalist of the Year” award had gone to Olivia Newton-John, who many considered a straight-up pop singer.

This caused a massive firestorm within the country music community. They were miffed enough that they banded together at the home of George Jones and Tammy Wynette and formed ACE (Association of Country Entertainers) to try to keep those darn pop signers out of their genre.

Perhaps John Denver winning Entertainer of the Year over the likes of Waylon Jennings, Loretta Lynn, Ronnie Milsap, and Conway Twitty was just too much for Charlie Rich to take. According to the Country Music Hall of Fame, “The message to anyone watching seemed clear: in Rich’s eyes, a West Coast neo-folkie like John Denver, who had built his career on pop radio, was not welcome in country music.”

Charlie Rich, Jr., however, begs to differ. He insists his father’s actions were intended more as a jab at the music industry than at John Denver personally. He says his father was actually trying to be humorous, but a sorry combination of alcohol and pain medication for a foot injury made him miss the mark.

Anybody that knows anything at all about the history of my father will know that it simply wasn’t in his mind set to judge someone for not being ‘country enough,’ ‘blues enough,’ rock enough’ or ‘anything enough.

Charlie’s career steadily declined from that point on while John Denver’s continued its upward trajectory.