This Day in History: October 12th- Patriotism is Not Enough 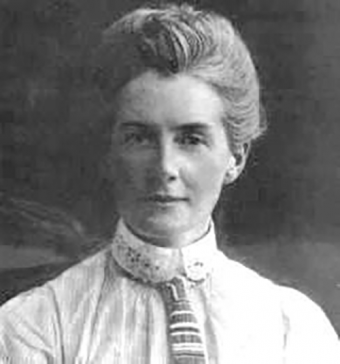 Edith Cavell was born on December 4, 1865, in Norwich, Norfolk, England. After returning to England from a stint as a governess in Brussels, Edith took up nursing after caring for her seriously ill father. She held several positions at home before being offered a job as head matron of the Berkendael Medical Institute in Brussels in 1907.

When she was home in England visiting her mother during the summer of 1914, Archduke Ferdinand was assassinated. While nobody really cared at the time, it did in a very roundabout way result in WWI. (In fact, Emperor Franz Josef himself expressed relief over the assassination because it rid him of an heir whom he deeply disliked.  The Emperor commented that “God will not be mocked.  A higher power had put back the order I couldn’t maintain.” And it wasn’t just the Emperor who was relieved; it was reported by an Austrian newspaper that the general consensus among the various political circles was that the assassination, though a tragedy, was for the best.  As far as the Austrian people were concerned, it was noted “The event almost failed to make any impression whatever.  On Sunday and Monday, the crowds in Vienna listened to music and drank wine as if nothing had happened.”  Indeed, it took the government itself a full three weeks to react. For more on all this, see: What Really Started WWI)

In any event, Edith’s family begged her to remain at home, but Edith believed her duty was to return to the hospital in Brussels.

Soon the Berkendael Medical Institute became a Red Cross Hospital, treating wounded soldiers from both sides of the conflict. (For the extremely fascinating origin of the Red Cross, see: A Memory of Solferino – The Life of Henry Dunant) However, in case anyone took it upon themselves to forgo neutrality, or, worse yet, fraternize with the enemy, there were posters all over Brussels warning that “Any male or female who hides an English or French soldier in his house shall be severely punished.”

This did not stop Edith from helping Allied soldiers escape from the clutches of the Germans. She would harbor them for a time while their ultimate escape was planned out and guides found to safely get them out of the country. Edith reportedly had as many as 35 escapees hidden at one time and all total helped an estimated 200 escape.

By 1915, the Germans began to suspect someone at the hospital was helping Allied agents avoid capture. They also had been tipped off about Nurse Cavell’s sympathies.

Edith’s friends warned her that she was under suspicion, but she didn’t stop. Almost inevitably, Cavell was arrested on August 5, 1915 by the German Secret Police. Cavell ultimately confessed, pretty much signing her death warrant. Her lawyer pled her case eloquently, stating she had only acted out of compassion for her fellow man and politics had never swayed her actions. Whether this was true or not (recent evidence purports that the soldiers Edith helped actually were carrying intelligence, and that she herself may have been recruited by the British Secret Intelligence Service), the Germans were not to be swayed. Cavell was to be executed for treason, despite various political appeals by Allied and neutral countries to save her.

On October 11, the day before her execution, the prison chaplain, Reverend Gahan, visited Edith and found her at peace. He later stated that she told him, “I want my friends to know that I willingly give my life for my country. I have no fear nor shirking. I have seen death so often that it is not strange or fearful to me.”

The next morning, October 12, 1915,  Edith Cavell was taken to the National Rifle Range just outside of Brussels and executed by firing squad. Although her execution was technically acceptable by the rules of war and the laws of Germany given what she’d done, killing a female nurse turned out to be a huge PR mistake for the Germans, with Cavell’s execution used very successfully in a variety of forms of propaganda to incite people in the Allied countries against Germany and the “barbaric” Germans. This is somewhat ironic given that in her final hours, she famously stated, “Patriotism is not enough. I must have no hatred or bitterness for anyone.”

As for the German perspective, Dr. Alfred Zimmermann, the German undersecretary for Foreign Affairs at the time, stated, “It was a pity that Miss Cavell had to be executed, but it was necessary. She was judged justly…It is undoubtedly a terrible thing that the woman has been executed; but consider what would happen to a State, particularly in war, if it left crimes aimed at the safety of its armies to go unpunished because committed by women.”

After the war, Cavell’s body was exhumed and buried in her hometown of Norwich. A statue in her honor was erected in London’s Trafalgar Square.