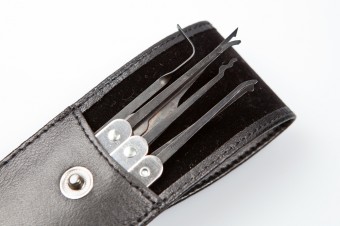 In April 1851, Alfred C. Hobbs boarded the steamship Washington bound for Southampton, England. His official duty was to sell the New York City-based company Day and Newell’s newest product – the parautopic lock – at a trade show – London’s Great Exhibition. But Hobbs had something a bit more nefarious up his sleeve, or rather in the small trunk that accompanied him on the ship. In it sat a large assortment of picks, wrenches, rakes, and other slender tools.  You see, Hobbs wasn’t just trying to sell his locks. He was trying to prove that his competitors’ locks were, quite simply, not good enough. He had the tools, skills, and charisma to do just that. Alfred Hobbs was about to launch the Great Lock Controversy of 1851.

Of all the locks at the Great Exhibition in July of 1851, the “Detector” was thought of as top of the class. Patented in 1818 by Jeremiah Chubb, it had become the most widely used and prestigious lock throughout England. In fact, in 1823 Chubb was given the distinguished honor of being the sole supplier of locks for England’s post offices and “Her Majesty’s Prison Service.” 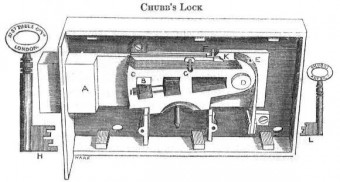 By 1851, Chubb & Son and their “Detector” lock was so highly respected that they were given the assignment of creating a special security display cage that housed the great Koh-i-Noor diamond, a 186 carat diamond that currently sits in the Crown of Queen Elizabeth which is locked in the Tower of London.

Numerous picklocks in London had made attempts at getting past the Detector with no success.  In one instance, a picklock who had been imprisoned was offered his freedom if he could figure out a way to pick the Detector lock.  He couldn’t do it.

What made the Detector so difficult was that the lock had a built in anti-lock picking mechanism which, if triggered, would render the lock inoperable, even if you had the key. This trap worked such that if you lifted one of the pins beyond what the key would have done, it triggered the lockdown mechanism. By this, you could also tell if someone had tried to pick the lock, if your key suddenly stopped working.  To get the lock to work again, a special regulating key was needed, which would reset the lock such that it could be opened once again with the normal key.

The “Detector” was thought to be in a lock class all to itself. That is, until Hobbs got to it.

According to a report filed by Benji Johnson, “an agent of the state of New York appointed to attend” the Great Exhibition, Hobbs wasted very little time in proving that Chubb’s locks were not impenetrable. As the report read, “Soon after the exhibition opened, Mr. A.C. Hobbs, of New York, who had charge of Day and Newell’s locks, obtained one of Chubb’s locks and opened it in a space of 10 or 15 minutes, in the presence of several gentlemen.”

As one would imagine, this did not sit well with many an Englishmen who were using the Detector to lock away their homes and valuables; most of all, it did not sit well with Chubb & Son. They challenged Hobbs to try something a tad more difficult, a Chubb’s lock attached to an iron door of a vault in Westminster that was a “depository of valuable papers.” Hobbs sent out an invitation for them to come watch him pick, “Gentlemen- An attempt will made to open a lock of your manufactured on the door of a strong room… You are respectfully invited to be present and witness the operation.”

At approximately 11:35 am, in front of the iron door in Westminster, Hobbs met his skeptical onlookers. He took out from his “waistcoat two or three small and simple-looking tools – a description of which, for obvious reasons, we fear to give” and went to work. Within twenty five minutes, he had the lock open with a “sharp click.” He had once again successfully picked a supposedly impenetrable Chubb lock.

Witnesses, hardly believing their eyes, asked him to do it again. So, he relocked the lock and picked it again. This time in seven minutes and “without the slightest injury to the lock or door.” England’s illusion of the security of their possessions had been shattered.

After making his presence quite known at London’s Great Exhibition, Hobbs continued his lock picking tour in England. For instance, later that summer, he picked the “monster” Bramah Precision lock, which had never been picked since it was manufactured in 1790. This scared the Bank of England enough that they had all of their locks swapped out for Day & Newell’s.

Dubbed  by the newspaper “The Great Lock Controversy,” the London Times wrote, “We believed before the Exhibition opened that we had the best locks in the world,” but no longer after Hobbs’ demonstrations. Skeptics doubted Hobbs’ ability, asking if the locks were picked properly, if he had cheated, or even, if they hadn’t seen it themselves, that it was all an urban myth. Even major publications, while admitting that Hobbs did do what was asked, doubted his skills. Said Bankers’ Magazine, “the result of the experiment has simply shown that, under a combination of the most favourable circumstances, and such as practically could never exist, Mr. Hobbs has opened the lock.”

So how did Hobbs acquire his prodigious lock picking skills? Hobbs father died when Hobbs was just three years old, so as soon as he could work, he did so to help support his family. Thus, at the age of ten, he began his professional career as a farmhand. He eventually moved to wood carving, carriage building, tinsmithing, and harness making. Around 1835, he earned an apprenticeship with the Sandwich Glass Company (now a museum sixty miles outside of Boston) where he learned to make doorknobs and the locks that went with them; he soon also became very talented at picking those locks. He took those skills to Day & Newell and quickly became a very good salesman. After all, what’s a better way to sell locks than to easily pick your competitors’ locks in front of your potential customers?

Before showcasing this talents to Britain in 1851, Hobbs picked his way across America. He hopped from town to town calling on banks to challenge him to open their safes, all in the name of selling Day & Newell locks, of course, and sometimes for prize money.

For instance, according to a story recounted in A History of the Old Town of Stratford and the City of Bridgeport, Connecticut written in 1888, while on a job in Lancaster, PA replacing locks at a bank in 1848, a cashier showed him a newspaper ad placed by a “Mr. Woodbridge, of Perth Amboy” offering $500 (about $11,000 today) to the person who could open the lock on the safe in the New York’s Merchant Exchange reading room (now the National City Bank Building at 55 Wall Street) within thirty days. Hobbs proclaimed to the clerk, “That is my money” and left for New York right after finishing the job in Lancaster.

Hobbs met his challenger in New York and after parameters were set: three arbitrators were to oversee; he must use instruments of his own; and if he was not able to open the lock, Hobbs would have to sign a certificate declaring the lock perfectly safe and recommend it to the public.

Woodbridge’s lock was extremely cleverly designed.  Besides having 479,001,600 possible arrangements of the pins, it was “rigged” such that if the bolt was pulled before the tumblers were perfectly set, anything in the lock would be seized and you’d be unable to remove it, thus making the lock impossible to pick at this point with tool(s) stuck inside it.  So the picklock couldn’t try to open the lock until he or she knew the tumblers were set just so.

After everyone went home for the day, Hobbs was given access to the safe and began work on the lock at nine pm. In just two and a half hours, he had figured out the correct setting for the pins, and laced a thin metal wire into the lock to pull the bolt. Of course, he needed the arbitrators to witness what he’d done to get credit, so he waited until the following morning when they could be called upon.

At ten am the next morning. Mr. Woodbridge, who Hobbs had requested attend him along with the arbitrators, found Hobbs standing in front of the safe with a crowd surrounding him. Again from A History of the Old Town of Stratford and the City of Bridgeport, Connecticut:

Mr. Woodbridge came and there being quite a crowd around, he called from a distance: “Hallo, Mr.Hobbs, what is the trouble?”

“There is something the matter with the lock,” said Mr. Hobbs.

“What is it?” said Mr. Woodbridge.

Mr. Hobbs then carefully moving the wire, pulled the door of the safe open and said, “Your lock won’t keep the door shut.”