This Day in History: May 21st- The Long Island Lolita 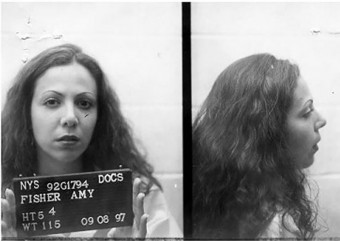 On May 21, 1992, 17-year-old Amy Fisher was arrested two days after shooting her lover’s wife on the porch of their home in Long Island, New York. The victim, though gravely injured, survived the attack and eventually forgave her assailant. When the sordid details of her affair with her much older, very married, boyfriend became public, Amy was dubbed the Long Island Lolita by the national media.

The infamous affair between Amy Fisher and Joey Buttafuoco began in May of 1991. They met at his auto shop when her father was getting a car repaired. Amy was 16 and Joey was 35. After many trysts, including a nine-day marathon in the local Freeport Motel during July of 1991, Amy decided she wanted more from the relationship than just sex.

By spring of 1992, she was pressuring Joey to leave his wife, Mary Jo. Joey had no intentions of breaking up his marriage, and flatly refused to entertain the idea. Consumed with rage, Amy headed over to the Buttafuoco home. When Mary Jo came to the door, after a very brief conversation, Amy shot her in the head at close range. Miraculously, as mentioned, Mrs. Buttafuoco lived to tell the tale but was left with a bullet in her head and her face partially paralyzed.

Amy Fisher was arrested at her home on May 21, 1992 thanks to information provided by Joey Buttafuoco and a description from Mary Jo. A week later, Fisher was indicted for attempted murder. The police launched an investigation against Buttafuoco for statutory rape, but were forced to drop it for lack of evidence.

That is, until one of his co-workers came forward and stated that Buttafuoco bragged about his sexual relationship with Fisher. The rape case was re-opened, and with the help of such evidence as a signed hotel receipt, Buttafuoco pled guilty to the July 1991 sex-a-thon at the Freeport Motel. He received a six month jail sentence. During the proceedings, Mary Jo Buttafuoco referred to Amy as a “prostitute”, but, at least publicly, believed “her Joey” was 100 percent blameless in the situation.

Amy pled guilty to the lesser crime of assault and was sentenced to 5-15 years. While serving her sentence, Amy claimed she was coerced into pleading guilty by her attorney, who she was also sleeping with. She also complained she was being raped by prison guards, and filed a $220 million lawsuit, which she later dropped.

After taking anger management courses, Amy wrote to Mary Jo Buttafuoco apologizing for the horrible crime she committed against her. Whatever she said must have had a profound effect on Buttafuoco because she forgave Fisher and came to her parole hearing.
Amy was released in 1999 after serving seven years of her sentence, no doubt thanks to Mary Jo’s intervention.

The Buttafuocos divorced in 2003 after 26 years of marriage.

Amy Fisher became a columnist for the Long Island Press, got married and had two children, and occasionally teamed up with either Mary Jo or Joey for appearances on programs like Entertainment Tonight and The Insider. She’s also penned an autobiography called “If I Knew Then.”

Writing her autobiography was a way for Amy to clear up the many misconceptions she feels the public has about her. She said, “there was so much thrown out there about me, about my life, 99 percent of it was negative, 90 percent of it wasn’t even true. So I said, you know what, by telling my true story it can’t be any worse than the false story that’s already out there.”

Since then, and after the release of a sex tape she and her husband had made and her husband sold to Red Light District Video (seemingly without her consent based on the subsequent lawsuit), she has dabbled in the adult film industry, worked as a stripper, and operated a webcam show out of her home.