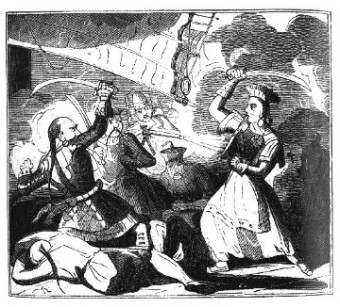 Today I found out about the prostitute that rose to command a huge armada that controlled the South Chinese Sea and the Guangdong province.

While female pirates weren’t uncommon off the coast of Asia in the 18th and 19th centuries, one woman stood above them all.  Her birth name isn’t known, but this Cantonese pirate went by the name Ching Shih (also, by Zhèng Yi Sao, “wife of Zhèng”, and Zhèng Shì, “widow of Zhèng”.  For the purpose of this article, I’ll just refer to her as Ching Shih to avoid any confusion.)

Ching Shih was born sometime around 1775 (the exact date isn’t known).  At the age of 26, she found herself working as a prostitute in a floating brothel in Canton.  While there, she caught the eye of Zhèng Yi, already a successful pirate with a small fleet of ships at his command, known as the “Red Flag Fleet”.  Exactly how the two ended up together is disputed.  Some historians hold that Zhèng Yi sent a raid to plunder the brothel and asked his men to bring back his favorite prostitute, Ching Shih, for his portion of the loot, while others claim he simply went there himself and proposed that they wed, which she only agreed to after he consented to give her equal share of his plunder and to allow her to help run the organization.  Whatever the case, once married, Ching Shih did indeed begin helping  Zhèng Yi run the Red Flag Fleet.

During the next six years, their fleet grew initially from about 200 ships to 600 with some key alliances, including forming the Cantonese Pirate Coalition with pirate Wu Shi’er, and then to 1700-1800 ships by 1807, as more and more pirates flocked to their banner.  Unfortunately for Zhèng Yi, on November 16, 1807, he found himself caught in a typhoon and didn’t manage to survive the ordeal.

Rather than step aside, handing over the organization to someone else, Ching Shih convinced Zhèng Yi’s second in command, 21 year old Chang Pao, to support her in taking over the Red Flag Fleet.  Chang Pao was the son of a fisherman and had actually been captured by Zhèng Yi when Chang Pao was just 15.  He was then forced into the life of a pirate.  He quickly gained favor in the eyes of Zhèng Yi due to his intelligence, bravery, and skill in a fight and was adopted by the pirate captain and Ching Shih as a son and made second in command of the fleet.

With Chang Pao leading their troops in raids and the like, Ching Shih focused on the “business” side of things, continuing to plan military strategy and also to govern and grow the organization into something that went beyond just partnered pillaging pirates.  At the Red Flag Fleet’s peak in 1810, she commanded about 1800 ships, both big and small; 70,000-80,000 pirates (about 17,000 male pirates directly under her control, the rest being other pirate groups who agreed to work with her group, then female pirates, children, spies, farmers enlisted to supply food, etc.); controlled nearly the entire Guangdong province directly; held a vast spy network within the Qing Dynasty; and dominated the South Chinese Sea.

She didn’t just rely on looting, blackmailing, and extortion to support her troops either.  She setup an ad hoc government to support her pirates including establishing laws and taxes.  Because she controlled pretty much the entire criminal element in the South Chinese Sea, she also was able to guarantee safe passage through it to any merchants who wanted to pay.  Of course, if they didn’t pay, they were fair game for her pirates.

In order to manage her ruffians and get them all to do what she said without question, she setup a strict system of law within the Red Flag Fleet which basically equated to, “You don’t follow the rules or I think you aren’t and you get your head chopped off.  No exceptions.”  Specific laws included:

She didn’t just restrict herself to sea battles either.  She used her numerous shallow-bottomed boats to good advantage along rivers to raid towns along the way, including defeating any armies that came against her.  For instance, two towns once banded together, raised an army, and sent it against her forces.  The Red Flag Fleet won the battle and she subsequently marched her army to the two towns and ransacked them, including beheading every male found there.

Now, a pirate controlling a large portion of the Emperor’s land and subjects didn’t sit well with him.  As such, he raised a fleet of ships to attack Ching Shih’s fleet.  Unfortunately for him, Ching Shih was also a brilliant military strategist and rather than running from the Emperor’s armada, she sailed out to meet it with her fleet, which defeated the armada quite easily.  Not only this, but she managed to steal 63 of the large ships sent against her and convinced most of the surviving crews to join her… by letting them choose between being nailed to the deck by their feet and then beaten to death or becoming members of the Red Flag Fleet and celebrating the victory with the rest of the pirates.  Needless to say, she found herself with plenty of replacements for the pirates she’d lost in the battle.  As for the Admiral of the fleet sent against her, Kwo Lang, he committed suicide before he could be captured by Ching Shih.

The attacks on her fleet didn’t stop there.  However, now without a fleet large enough to take her on alone, the Qing Dynasty government enlisted the aid of the super-power British and Portuguese navies, as well as many Dutch ships, paying them large sums for their help.  These combined forces waged war on Ching Shih’s organization for two years with little success.  She won battle after battle until finally the Emperor decided to take a different tack.  Instead of trying to defeat her, he offered her and most of her organization amnesty.

Ching Shih initially rejected the terms of the amnesty treaty.  However, in 1810 she unexpectedly showed up at the home of the Governor General of Canton with the intention of working out a peace treaty.  The deal that she struck was that the fleet would disband, including giving up most of their ships, and in return, they would nearly all be granted amnesty and allowed to keep any loot they had acquired during their time as pirates.  The exceptions were 376 of her crew of which 126 were executed and the other 250 received some punishment or other for their crimes.

All the rest got off scot-free and as part of the agreement any who wanted it were to be allowed to join the military, including her second in command and now husband, Chang Pao.  He was given command of 20 ships in the Qing Dynasty navy to command.  Ching Shih was also given money to distribute to her crew to help offset the cost of them switching from a life at sea, to one in the mainland.

As for Ching Shih herself, she negotiated the rights to keep the fortune she’d accumulated and acquired a noble title, “Lady by Imperial Decree”, which entitled her to various legal protections as a member of the aristocracy.  She then retired at the age of 35, opening a gambling house/brothel in Guangzhou, Canton, which she managed until her death at the age of 69.  During this time, she also became a mother to at least one son and a grandmother.  One can only imagine the bedtime stories she told her son and grandchildren.

So not only was she arguably the most successful pirate of all time, but unlike pretty much every other famous pirate in history, she also managed to escape being executed or punished in any way for her crimes and retired extremely wealthy and a member of the aristocracy.  The Dread Pirate Roberts has nothing on her.