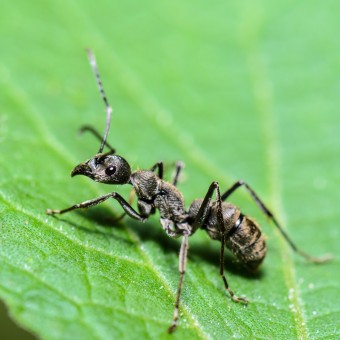 Making zombies of ants, Swiss cheese of snails and Sherpas of sheep and cows, the lancet liver fluke proves that you don’t need to be big to be powerful.

Growing up to 10 mm by 2.5 mm (0.5 x 0.1 inches), Dicrocoelium dendriticum is a parasitic flatworm (also known as a trematode) that begins life as eggs living in the poop of (generally) cows or sheep. Shortly after being deposited, the eggs are ingested by a snail (such as Zebrina spp. or Cionella spp.) where they hatch into larva (miracidia). In this form they burrow through the snail’s gut and rest in its connective tissue where they develop into a second larval stage (sporocysts). Now they move to the digestive gland where they bear female sporocysts, that themselves produce yet another larval stage (cercariae). These last travel to the snail’s respiration chamber from which the snail finally rids itself of the parasite when it exits as a slime ball.

As appetizing as that sounds, it’s no wonder that an ant (such as Formica fusca) will soon wander by and eat it. Once in the ant’s intestine, the cercariae are released from the ball and most migrate to the ant’s main body cavity (hemocoel) where they transform into a fourth larval stage (metacercariae).

However, one evil genius metacercaria does not join its siblings in the ant’s hemocoel, but rather travels to a cluster of nerve cells (sub-esophageal ganglion), where it “takes control of the ant’s actions by manipulating these nerves.” When night falls, the metacercaria then directs the ant to climb to the top of a blade of grass, where it stays until the morning; the ant will repeat this nightly ritual (at the behest of its puppet master) until it is eaten by a grazing animal.

The fluke has now reached the body where it will finally mature (called the primary or definitive host). It makes its way from the animal’s small intestine to its bile duct, where it reproduces and makes eggs, the latter of which are pooped by the animal into the field to start the cycle all over again.

D. dendriticum is found throughout the world and although it primarily infects sheep, cows, snails and ants, it has been known to inhabit pigs, goats, alpacas and llamas. In fact, while rare, human infections are not unknown, with the flukes infesting human bile ducts. Usually those infected suffer from only mild symptoms include bloating and diarrhea, although some suffer from enlargement of the lining of the bile ducts (biliary epithelium) that, along with a growth of fibrous tissue, can cause the liver to swell (hepatomegaly) and cirrhosis. Note that human infection is extremely rare, as you might imagine given the way one would have to acquire the parasite.  For instance, one documented case happened only after a man drank water that had infected ants in it.

Regardless, you have to hand it to the lancet liver fluke that, during the course of its life, commonly forces three different animals to do its bidding, and completely bends the ant to its will. As another tiny powerhouse once said, “Judge me by my size, do you? And well you should not.”