This Day in History: April 29- Taliesin 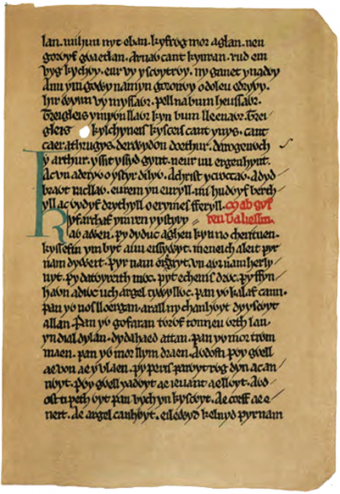 Believed to have been born on April 29, 534, C.E.,Taliesin was a renowned bard who served at the courts of three British Celtic kings. It is purported that his work in a Middle Welsh manuscript is preserved today as the Book of Taliesin. At least 11 of the poems have been confirmed to date back to the sixth century.

These poems praise known historical kings of the time. A whopping eight of them address Urien Rheged, whose kingdom was located on the English/Scottish border around Solway Firth. A death lament, or marwnad, was dedicated to Owain, son of Urien.

The remaining works in the Book of Taliesin contain mythological and religious content that is thought to have been written by other authors in a later era. They lack Taliesin’s characteristic meter and other clues that are indicative of his real-life persona. In fact, there are two separate Taliesins that have come down to us through the centuries: the historical Taliesin and the mythological Taliesin.

In Celtic mythology, Cerridwen, the goddess of magic, is the mother of Taliesin, the god of the bards. The circumstances of his birth were highly unusual. It all began as Cerridwen was whipping up a potion for her ugly-as-sin son Morfran in her cauldron of transformation, which contained infinite wisdom and knowledge. (If you can’t be good looking, you can at least be smart.)

The potion needed to be stirred for a year and a day. An old, blind man was tasked with the stirring, while a young lad named Gwion was given the job of adding wood to the fire. The blind man allowed a small amount of the potion to escape the cauldron, and it landed on Gwion’s finger. The lad automatically put his finger in his mouth to soothe it from the burning liquid, which also imparted him with all the mystical gifts contained in Cerridwen’s magical brew.

This insight told him it was best to head for the hills before she got hip to what had happened.

It didn’t take long for the goddess to figure out what had transpired, and a long shape-shifting game of cat-and-mouse followed. Cerridwen ended up getting the better of her prey when she turned into a hen and ate Gwion, who was disguised as an ear of corn.

She then became pregnant, thanks to the power of the potion, and the child was none other than Gwion. The babe was born on April 29, the Celtic festival of Beltane. When Cerridwen laid eyes upon the child she could not bring herself to kill him, but rather she cast him upon the waves, placing him in the care of the sea god Dylan. A fisherman named Elffin pulled his tiny basket ashore with his net, cut open the waterproof covering, and gazed in wonderment.

The baby stared up at him with the wise eyes of an old soul. Elffin was so taken by the child’s beauty that he exclaimed, “There’s a radiant brow!” that in Welsh would be “Tal iesin dyma!”

“Taliesin, I am!” the infant agreed, and if there was any doubt that this wasn’t any ordinary kid before, there surely wasn’t by then. Elffin brought him home, and he and his wife raised Taliesin, who became the greatest poet of all time. He is major player in the Arthurian legends and is considered a minor deity in Celtic mythology.