When Boston Drowned in Molasses 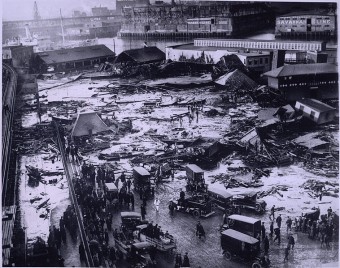 On a relatively mild January day in 1919, Boston was the setting for one of the more bizarre disasters to ever happen on American soil. The incident was also the impetus behind the longest court battle in the city’s history. 21 people lost their lives that day, while another 150 were seriously injured. The price tag to address the damage was in the neighborhood of $100 million dollars (adjusted for inflation). To say that the accident was devastating barely begins to convey the chaos that ensued.

On Commercial Street in Boston’s North End, a tank holding nearly two and a half million gallons of molasses, the standard sweetener in the U.S. at the time, was waiting for transfer to the Purity Distilling Co.’s distillery in nearby Cambridge. The 50 ft. high tank was a well-known landmark in the neighborhood, which at the time was inhabited by mostly Italian and Irish immigrants. The area also included an elevated rail line, numerous blacksmith businesses, a slaughterhouse, and unpretentious, working-class homes.

The 3-year-old tank had set Purity’s parent company, United States Industrial Alcohol (USIA), back $30,000 (about $393,000 today) – a princely sum a century ago. Its location proved perfect for its purpose. It sat a mere 200 ft. from Boston Harbor and was also close to the railroad, ensuring that the shipping of molasses in and out of the city could be done quickly and efficiently.

Unfortunately, the storage tank was never properly tested before being put to use, as a huge shipment of molasses was due to arrive a few days after the tank’s construction was completed. From the very beginning, leaks in the structure were noted, and streams of molasses would roll down the sides of the tank. (Those of you who lived through the Big Dig may be experiencing a strong sense of déjà vu right now.) People living nearby would fill up to-go cans with the sweet brown goo, and kids would scrape molasses off the tank with sticks to create homemade lollipops. On a scarier note, neighbors and plant workers reported hearing rumbling noises that originated from inside the storage tank.

Rivets bursting from the tank was comparable to coming under attack from machine gun fire, while buildings, boats and people were tossed about like the toys of a two-year-old throwing a tantrum. In a matter of just a few minutes, the entire waterfront area was destroyed beyond recognition.

Soon the neighborhood was filled with members of the Boston Police, Red Cross workers, and sailors and soldiers who were in the area. A temporary hospital was quickly erected at Haymarket, where volunteers frantically tried to remove molasses from the victims’ airways so they wouldn’t suffocate. When the Suffolk County medical examiner arrived on scene, several dead bodies had already been pulled out from the molasses, and he remarked the corpses looked like they were covered in “heavy oil skins.” It didn’t take long for rescue workers to become caked in both molasses and blood. As “The Boston Post” reported: “The whole hospital reeked of molasses. It was on the floors, on the walls, the nurses were covered with it, even in their hair.” To add to the horror, Boston cops were forced to shoot drowning and severely injured horses in the decimated city stables.

Rescue efforts continued for days. The nightmarish specter of cadavers covered in thick, brown goo was the reward those bravely searching for survivors were met with all too often. The molasses made finding the bodies extremely difficult, and it was four months before all of those killed were recovered from the mess.

As the molasses hardened, saws, chisels and broom handles were used to break it up. The water in Boston Harbor remained a murky brown color until that summer. People unintentionally tracked the gross goop from the North End all over the city on their shoes and clothes, rendering the entire city of Boston a sticky, disgusting mess. There was nowhere in town you could hide from the cloying, sickening smell of molasses.

119 individual lawsuits were filed against United States Industrial Alcohol (USIA) by August 1920. Due to the complex nature of the case, not to mention the large number of plaintiffs and lawyers, Judge Loranus Eaton Hitchcock, the Superior Court Judge, consolidated the lawsuits. Each opposing side had one lead attorney, and an auditor, Boston attorney Hugh W. Ogden, was appointed to hear the evidence and subsequently issue a report pertaining to liability and damages incurred.

In a nutshell, Chief Judge of Boston Municipal Court, Wilfred Bolster and MIT professor CM. Stoffard concluded that structural issues with the tank itself was to blame for the accident, while USIA maintained that the tank had been sabotaged by Italian anarchists. On April 28, 1925, Ogden finally handed down his verdict, concluding that USIA was at fault. Ogden stated: “‘The general impression of the erection and maintenance of the tank is that of an urgent job … I believe and find that the high primary stresses, the low factor of safety, and the secondary stresses, in combination, were responsible for the failure of the tank.” Thus ended the longest and most costly civil suit that Massachusetts had ever seen.

As a direct result of this disaster, the City of Boston began the practice of requiring that all plans for construction projects must be approved by an engineer or architect prior to any work commencing. Before long, this practice spread throughout the entire country.

The tank that caused all the trouble was never replaced or rebuilt. The site now is home to a recreational center that includes a baseball field and a playground. Bocce courts are also present – a nod to the neighborhood’s still vibrant Italian community. The only reminder of the day Boston drowned in molasses is a discreet plaque commemorating the tragedy near the park’s entrance.