How Do Other Animals Deal with the Umbilical Cord and Placenta When the Baby is Born?

March 6, 2015 Melissa
Brandi N asks: How do other primates deal with the umbilical cord and placenta when the baby is born when they don’t have any sort of medical help to make sure everything’s handled right? 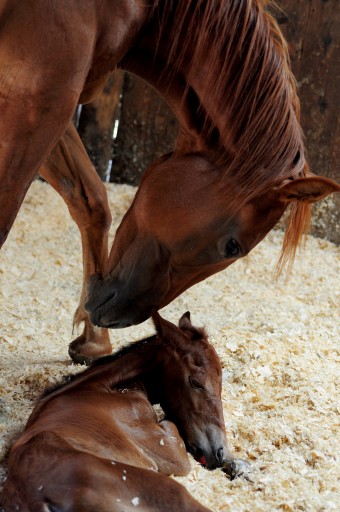 Other than certain modern humans, some marine mammals (like whales and dolphins), chimpanzees and a few domesticated animals, mammal mothers typically eat the afterbirth.

While most humans have all that mess dealt with in hospital, cetaceans enjoy “a rather explosive expulsion of the placental into sea water.”[1] On the other hand, chimpanzee mothers are said to ignore the matter entirely, and simply haul around baby, placenta and cord until the latter dries up and drops off (usually in about a day).

For most of the rest, however, the mothers eat not only the placenta and the cord, but they tend to ingest a fair bit of amniotic fluid, as well (while cleaning the affected areas). Researchers have several theories to explain placentophagia, and these include hygiene, to reduce odors that may attract predators, to replenish nutrients lost during pregnancy and to acquire additional hormones.

Another theory for the practice is that by gobbling up the afterbirth, the mother will naturally come into contact with her young, and by licking them clean, this contact will stimulate bonding and caretaking behaviors. 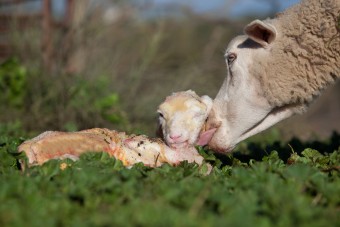 Neuroscientists have other hypotheses, and these include that ingestion of the afterbirth, and in particular the amniotic fluid, may enhance naturally occurring “pregnancy –induced analgesia.”[2] They theorize that since the amniotic fluid appears before any fetus pops out, by cleaning it off through ingestion, the mother may also be ingesting a substance that boosts her brain’s ability to produce natural painkillers. Similarly, there is some evidence to support the theory that in the same way afterbirth boosts endogenous opioid production to alleviate pain, those additional opioids may also stimulate maternal behaviors.

Given all of these potential benefits for animals, it follows that some might wonder if placentophagia might be beneficial for human mothers, as well.

A thorough review of anthropological literature was conducted in 2010 and did not find a single example of afterbirth eating as a ritual custom in any documented culture, although some theorize that in the past, it must have been practiced.

Nonetheless, there have always been anecdotal reports, and in the 1950s, a study was conducted in Czechoslovakia where freeze-dried placenta was fed to women who were having trouble lactating (the control group was fed beef). Of those who ate placenta, more than 33% displayed a “strong reaction,” compared to no reaction among the beef eaters.[3]

In reliance on these reports, this practice has seen a resurgence, and, increasingly, new mothers are saving their placentas and ingesting them; adherents claim consumption of the organ increases strength, relieves postpartum depression and mood swings, improves lactation, and accelerates the mother’s recovery.

The most common way to ingest placenta today is in capsule form (like a vitamin). Termed a traditional Chinese method, to make placenta pills, first the organ is steamed (in this recipe, with ginger, hot pepper and lemon), then it is chopped, dehydrated, ground into a powder and placed into capsules (like vitamins).

Placenta can also be made into a tincture, cooked as with other meats (there is even a cookbook), eaten raw or blended into smoothies… Yum? Of course, the pills seem to be the most popular.

So does it really work? Despite its increasing popularity, there remains little in the way of any scientific evidence to support adherents’ claims, and, unfortunately, there hasn’t been a single double-blind study testing the afterbirth pill’s effectiveness.