December 20, 2014 Daven Hiskey
This is a weekly wrap of our popular Daily Knowledge Newsletter. You can get that newsletter for free here. 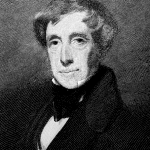 On December 23, 1823, the poem A Visit from St. Nicholas, better known today as The Night Before Christmas was first published. The poem first appeared in the New York Sentinel with no author listed, having been delivered for publication by a friend of Clement Clarke Moore, who was a professor of Greek and Oriental literature and who is generally considered today to have been the author. Before this poem was published, traditions surrounding St. Nicholas were numerous with no real set, near universally accepted idea of “Santa Claus” like we have today. Elements of the… (more) 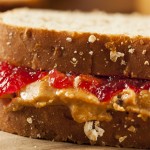 Arachibutyrophobia is a proposed humorous name for the fear of peanut butter getting stuck to the top of your mouth, coined by Charles M. Schulz in a 1982 edition of his famed Peanuts comic strip. But why does peanut butter have such a tendency to get stuck in your palate when so many other foods don’t? As it so happens, peanut butter contains a perfect storm of ingredients seemingly designed with the express intent of creating a peanut flavoured choking hazard. For starters, peanut butter, shockingly enough, contains a lot of peanut oil, which makes it incredibly difficult for your saliva to perform its normal task of helping in this first stage of processing food; as we all know, oil and water don’t really like…(more) 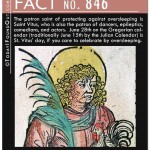 Quick Fact 841: If you’ve ever felt like your friends are more popular, happier, and wealthier than you… well, on average, you’re probably right.  This all comes down to something known as the Generalized Friendship Paradox.  The Friendship Paradox was first proposed in 1991 by sociologist Scott L. Feld, who demonstrated that your friends, on average, will have more friends than you.  How?  Because most people have a very small number of friends, but a small percentage of the population has a relatively large number of friends and you are likely to be friends with at least one or more of these super-popular people precisely because they are very popular. Thus, the average number of friends each of your friends has will be more than the number of friends you have. Similarly, your followers on Twitter, Facebook, and other social networks will, when averaged, have more followers than you.  This has since been shown to also apply to things like the number of sexual partners your partners over your life have had; it will, on average, be more than the number you’ve had.  Further, Young-Ho Eom of the University of Toulouse and Hang-Hyun Jo of Aalto University demonstrated mathematically that this also applies to your friends, on average, being wealthier and… (more) 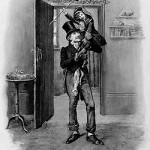 In the well-loved A Christmas Carol (it has never been out-of-print since it was first published in 1843), the protagonist (so to speak) is Ebenezer Scrooge, the miserly boss of Bob Cratchit, who lives with his family in poverty while Scrooge enjoys an easy life. One member of the Cratchit family, Tiny Tim, struggles with a crutch and has iron bars on his legs, but the name of his illness is not given. As the story progresses, Scrooge is visited by four ghosts who show him the error of his miserly ways. During the last of these visitations, the Ghost of Christmas Yet to Come shows Scrooge (among other things) that Tiny Tim has died of his ailments.
Ultimately… (more) 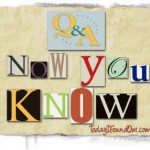 Is it Safe to Eat Moldy Bread or Moldy Cheese?

For the quick answer to your question: no and sometimes. While not all molds are bad for you to eat, many are, and unless you want to whip out a microscope and meticulously identify the mold present on your food (note: there are 300,000 known types and counting), as a general rule it’s better to avoid moldy foods. Not all molds that are bad for you will cause apparent symptoms right away either. For instance, many molds produce Aflatoxin which is a substance that will up your chances of getting cancer and may cause a variety of other health problems for you, though not necessarily right away. That being said, sometimes it is OK to cut off the mold and eat what’s underneath. As to when it’s OK to eat moldy foods and when it’s not… (more) 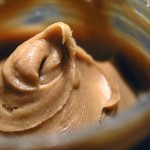 An average American child eats about 1,500 peanut butter and jelly sandwiches prior to graduating from high school. That is about a sandwich every four or five days. Americans eat a lot of peanut butter. Besides it being popular and delicious, peanut butter also has had a tremendous impact on how foods are made and labeled today. Thanks to the “Peanut Butter Hearings,” we can now be reasonably sure what we think we are eating is actually what we are eating. Contrary to popular belief… (more) 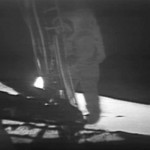 When Neil Armstrong and Buzz Aldrin stepped onto the Moon all those years ago during the Apollo 11 mission, literally everything they did became a record because everything they did that day was the first time in human history someone had done that thing on the Moon, which it turns out wasn’t made of cheese after all. While Armstrong’s first words on the Moon are some of the most famous (and controversial in terms of what he actually said exactly) ever uttered, a lot of the more mundane things astronauts did first on the Moon aren’t as well known. For example, after Aldrin joined Armstrong on the surface of the Moon, one of the first things the pair did was hop around like… (more) 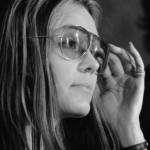 You may have wondered, if you’ve ever thought about it, why there is an “r” in “Mrs.” when it’s generally spoken as “missus” (also sometimes spelled “missis”).  “Mrs.” first popped up as an abbreviation for “mistress” in the late 16th century.  At the time, “mistress” didn’t popularly have the negative connotation it often does today, namely referring to a woman other than a man’s wife who he has an affair with.  Instead, back then “mistress”, deriving from the Old French “maistresse” (female master), was just the feminine form of “mister/master”.  “Mistress” itself first popped up in English around the 14th century, originally meaning “female teacher, governess”. By the 16th century “mistress” referred to any woman, with neither “mistress” nor “mister” referencing… (more) 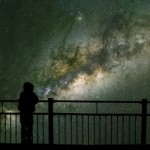 No, it has nothing to do with the candy bar. Like many words we use today, the English name of our galaxy is derived from its Latin name: Via Lactea. Translated, that means “the road of milk.” The Romans actually got the name from the Greeks, who called our galaxy “galaxias kyklos” or “milky circle.” Incidentally, the Greek name is also where we get the term “galaxy.” No one knows exactly who came up with the name, but it isn’t difficult to see how the name came about. From Earth, at least if you’re well outside the boundaries of city lights, our galaxy looks something like a band of milky light over a black background, as we are viewing it… (more) 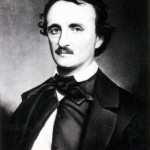 Edgar Allan Poe is probably best known for his raven that squawks “Nevermore,” but he’s also one of the first American short story writers and is often credited with being the “inventor” of detective fiction.  He also contributed heavily to the genre of science fiction. Not only that, but he was one of the first American writers to earn a living from his writing alone. What’s not as well-known about the man is that Poe had a somewhat turbulent stint in the military. The trouble began when Poe enrolled in a course at the University of Virginia. His foster father gave him a $100 (about $2,000 today) to cover living expenses for the year. Any university student today can tell you that university fees add up—the courses… (more)