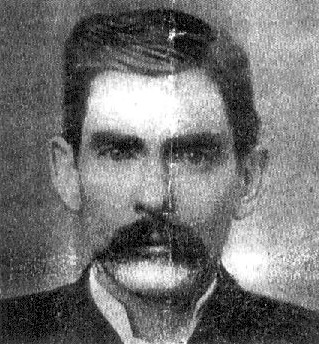 In the 1993 movie Tombstone, Doc Holliday (portrayed by actor Val Kilmer) is depicted as a good guy at heart, helping Wyatt Earp to keep order and law in the dangerous old west town of Tombstone, Arizona. As is the case with Earp, there is a mound of evidence that the real Doc Holliday wasn’t nearly so squeaky clean.  Here is the truth behind the legend of the “slickest gunslinger in the west,” Doc Holliday.

Born John Henry Holliday on August 4, 1851 in Griffin, Georgia (today, a suburb of Atlanta), “Doc” was the second child born to his parents, Henry (“Major”) and Alice Jane Holliday, but his older sister passed away during childbirth. He would remain an only child. His father was a veteran of several wars, including the Cherokee Indian War and the Mexican-American war. When he returned in 1848 from the Mexican-American war, he brought with him an orphaned Mexican boy named Francisco Hidalgo. It is said when John Henry was a young child, Francisco taught him how to become “the quickest draw in the west.”

Growing up on a “Southern frontier” farm was tough living, with humid air and erratic weather. John’s family was Scottish-Irish, like many in the region, and he was raised Protestant. His mother taught him manners and etiquette, while his father regaled him with war stories and survival skills. John was but nine years old when the Civil War broke out and his father once again left for war, but not before moving his family even further south, to the Georgia-Florida border. John attended school and was a good student, though he was noted as being somewhat rebellious.

Quickly after his mother’s death in May of 1866 from consumption (a.k.a. tuberculosis, see: Why Tuberculosis was Called “Consumption”), Major remarried to a neighbor’s daughter (who was 23, eight years older than John). John’s relationship with his father became strained and he left home to attend the Pennsylvania College of Dental Surgery in 1869, one of the best dental schools in the country. Seemingly, he did quite well at school and graduated with a license in 1872. He moved to St. Louis for a period of time, to join a friend’s dental practice, before moving back to Georgia.

Now, here begins the more interesting part of Holliday’s life. In 1872, in a story recounted in a Doc Holliday biography written by Gary Roberts, Doc Holliday: The Life and Legend, (but first conveyed in 1907 by noted writer Bat Masterson) Holliday first killed a man in Georgia during a racial dispute. Holliday and a few friends were at a watering hole when a group of African-American men joined them as well. Holliday did not approve and told them to leave. They didn’t. He produced a gun and shot one to three men (reports vary) to death. Now, a few historians think this story may not be entirely accurate due to discrepancies in the 1907 version, but it wouldn’t have been too out of character for Holliday given his preponderance towards violence.

Also around this time, he was diagnosed with tuberculosis just like his mother, who he watched die from the disease. With no effective cure, it was thought that a dry climate could at least alleviate the symptoms. Either because he was run out of town or due to his sickness, or maybe both, he moved to the dry air of Dallas, shortly thereafter in 1872.

He opened a dental practice in Dallas, but it wasn’t for long. According to True West Magazine, Doc’s constant coughing and illness kept patients away, so he had to learn how to make money another way – card games and gambling.

Refined, intelligent, and good at keeping a poker face, Doc excelled at Faro, where he became a dealer (or “banker”) at several saloons across Dallas. Faro was a game which pitted the banker against the other players. It was also a game that could be easily rigged. Doc was extremely good at Faro, or at least extremely good at cheating, earning himself a lot of money – and a lot of enemies.

Throughout the next few years, Doc was regularly arrested and fined for his gaming in Dallas. To avoid charges, he went on the run throughout the Southwest, dealing Faro at saloons all along the way. He got into more than one disagreement that required the use, or at least the threatening of, the skills he learned from Fransisco so many years back.  He seems to have gotten into gunfights throughout Texas, Kansas, Wyoming, and New Mexico. He also is known to have sliced open a man’s stomach when the man refused to follow the Faro rules that Doc had “implemented.” At one point, it is thought that US Marshals and Texas Rangers were even after him.

In 1879, he had made enough money to open his own saloon in New Mexico. He spent his time dealing Faro and drinking heavily, until one night a former army scout put up a fuss when one of Holliday’s saloon girls (possibly a prostitute) told him that she wasn’t in love with him. The army scout went outside and began to fire shots into Holliday’s establishment. So, Doc went outside and killed the man. The following year, he found himself in Tombstone, Arizona where history was waiting for him.

Wyatt Earp and Doc Holliday first became familiar, where else, but at a Faro gaming table. As the deputy of Dodge City, Earp was on the trail of well-known train robber Dave Rudabaugh and was venturing way out of his jurisdiction in pursuit, nearly 400 miles and into Fort Griffin, Texas.  Historians believe Earp wasn’t doing this out of any sense of justice, but rather for the considerable reward money. Either way, he was directed to the Faro table of Doc Holliday, who had dealt with Rudabaugh. Normally, Holliday would never talk to a lawman, but upon hearing about the reward over a game of Faro, he spilled the beans that he had heard that Rudabaugh was hightailing it back to Kansas. Earp wired the information to a friend there and Rudabaugh was soon captured. It is not known if Earp shared the reward money with Holliday, nor who won that game of Faro.

Also, according to a story supposedly told by Earp (possibly just a legend, given Earp’s and his many biographers’ known propensity to make up such stories), Holliday once saved Earp’s life. In 1879, with Holiday paying a visit to Dodge City with his girlfriend “Big Nose Kate,” the noted cowboy Tabo Driskell pulled a gun on Earp and was about to shoot him when Holliday came up behind him and placed a gun at his temple. Driskell dropped his gun and from then on, Earp credited Holliday with saving his life.

Whether true or not, in 1881, Earp wrote a letter to Holliday asking him to join him in Tombstone, saying they could use a dentist in those parts. More likely, Earp probably just wanted his favorite Faro dealer by his side to help fleece the denizens of the then prosperous silver mining town. So, Doc Holliday moved to Tombstone and that was where his legend was made and why anybody still remembers who he was.

It seems Holliday’s participation in the showdown at the OK Corral (or rather in a vacant lot next to the OK Corral) against Ike Clanton and his men had more to do with his loyalty to Earp, and the fact that he rarely said no to a gunfight, than upholding the law. There is also some evidence that Clanton may have been spreading rumors about Holliday robbing a stagecoach and that his girlfriend, “Big Nose Kate,” was a prostitute. There is also a story that Clanton called Holliday and the Earps out for the fight over they having cheated Clanton in a Faro game. On the other hand, this all may have been said after the fact to give Holliday reason to be in the gunfight.

The violence only took thirty seconds, left three men dead, and several men injured. While no one knows for sure who fired first, it was Doc’s bullet that first rendered a fatal shot. It is even written in some accounts that Clanton was not armed. But finding the truth about what happened in that gunfight is about as difficult as finding Bigfoot.

In the end, Holliday, along with Earp, was put on trial for murder. He was exonerated, but several attempts were made on his life over the next few years. He eventually made his way to Colorado where he increasingly became dependent on alcohol and opium as his health deteriorated.

He died in 1887 at the young age of 37 in Glenwood Springs, Colorado, from the same illness that claimed his mother – tuberculosis.

Wyatt Earp lived on and moved to Los Angeles in the early 20th century where his story got the Hollywood treatment, most prominently in the largely fictitious, but ever popular, “biography” Wyatt Earp: Frontier Marshall. Always loyal to his friend, Earp perpetuated the myth that his card shark, gun fighter pal, Doc Holliday, was an old west hero. It seems, if we are taking real historical accounts and evidence into consideration, this is actually quite false. But, as with Earp’s Hollywoodized tale, it sure makes a great story.