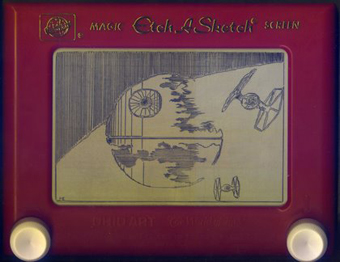 Today I found out how an Etch a Sketch works.

An Etch a Sketch is a remarkably simple device.  The primary components are just a small sheet of glass; a stylus controlled by two knobs; very fine aluminum powder; and tiny plastic beads. The tiny beads are mixed in with the powder to make sure the powder will continue to flow evenly and not get clumped together, as well as aid in the re-coating process when you shake the Etch a Sketch.

Among other things, aluminum powder has an interesting property in that it sticks to quite a lot of things, including glass, via an electrostatic charge.  So by turning an Etch a Sketch upside down and shaking, you effectively coat the glass with a thin layer of aluminum powder, which then adheres to the glass fairly well.  The stylus then simply scrapes off the aluminum powder from the glass wherever it’s touching. The lines this creates are black simply because there is no light inside the Etch a Sketch except what comes through the lines you’ve created.

tagged with etch a sketch facts