This Day in History: November 11th- Get Your Kicks… 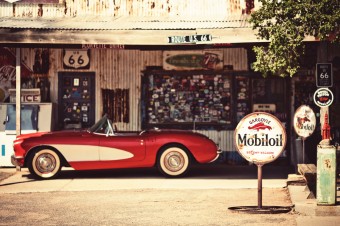 U.S. Route 66, also known as the Main Street of America, the Mother Road, and the Will Rogers Highway, was officially established on this day in 1926. One of the original American highways, it crossed eight states and three time zones. It has been immortalized in Bobby Troupe’s classic song “Route 66”, first recorded by Nat King Cole and covered by a zillion other artists including Chuck Berry and the Rolling Stones (and is now inevitably your earworm for the day: see Why Songs Get Stuck in Your Head).

The route (roughly) that would become Route 66 was forged many years earlier by those intrepid adventurers heading west for the gold rush, and then by the railroads. Train travel was more limited by the terrain than traveling by wagon as steep grades had to be avoided, and regular water sources along the route were required to power the train’s steam engines. Over time, small towns grew around these sidings and water stops, and their economic dependence on passing travelers continued into the highway era.

With the advent of the automobile, America entered a new era. People were on the move like never before, and roads needed to be built to accommodate their new-found mobility. No other road encapsulates this new-found freedom like Route 66, which not only connected the big cities of Chicago and Los Angeles, but also the sleepy small Midwestern towns in between.

During the hard, lean years of the Dust Bowl, many families whose farms had failed (mainly from Texas, Kansas, Oklahoma and Arkansas) traveled west on Route 66 in the hopes of landing agricultural jobs in California. During the Depression, the growing traffic along the highway provided much needed economic relief for many of the communities situated along the road as people relocated looking for work.

Though Route 66 was 2,448 miles long, it wasn’t fully paved until 1937. As the years passed, the highway underwent a variety of improvements and realignments that altered both its path and length. Most of these changes provided safer or faster routing, or skirted the road around heavy city traffic.

When President Dwight Eisenhower signed the Interstate Highway Act in 1956, Route 66’s days were numbered. Eisenhower was a big fan of the German Autobahn and believed a modern highway system was a crucial component of national defense. The new interstates incorporated much of the old Route 66, but where this was not possible many towns lost much of their highway-generated business. Arizona can claim the longest stretch of the original Route 66 still in use today.

In 1985, Route 66 was finally decommissioned as a federal highway when it was deemed no longer relevant. It was removed from maps that same year but is now included on some maps and atlases as “Historic Route 66”. It has been declared as a “National Scenic Byway” in numerous states, and there is a movement afoot to reinstate its official U.S. Route status.