The Day the Beatles Were Awarded MBE Medals 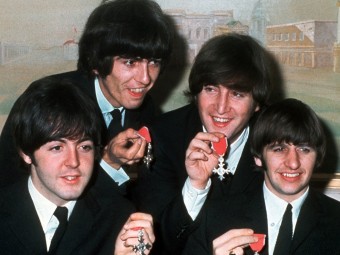 It was early May of 1965, the Beatles were busy in Twickenham studios in London, working on their second movie “Help!” During a break in filming, their manager, Brian Epstein, showed up in a dither and assembled them in a dressing room. “I’ve got some news for you, the Prime Minister and the Queen have awarded you an M.B.E.”

If Brian expected any whoops of jubilation, he must have been roundly disappointed. The Beatles did not, at the time, even know what an “M.B.E.” was. (The M.B.E. is a distinguished medal awarded in England by the Queen, with those awarded being members of the “Most Excellent Order of the British Empire.”)

On June 12th, the announcement became public and official- yes, the Fab Four were to be decorated at Buckingham Palace by her majesty, Queen Elizabeth.

According to Ringo: “He (Epstein) said, ‘What do you think, boys?’ I had no problem with it- none of us had any problems with it in the beginning. We all thought it was really thrilling. We’re going to meet the Queen and she’s going to give us a badge. I thought, ‘This is cool!'”

Paul added: “We were genuinely honoured.”

The Beatles fans were ecstatic and all seemed well for all concerned, for a brief time, but then… John Lennon, always the most rebellious, non-conformist Beatle, said that when he received the official letter of notice in the mail, he “chucked it in with the rest of the fan mail.” He went on to state that when he first saw the official envelope, “[I] thought I was being called up. (drafted)… We thought being offered the M.B.E. was as funny as everyone else thought it was… We all met and agreed it was daft…. then it all just seemed part of the game we’d agreed to play.”

And so, thus agreed upon, it was all set.

But not so with several previous M.B.E winners. Many of those medal bearers actually returned their medals in protest.

Strangely, the Beatle most against getting the M.B.E., John Lennon- “Mr. Anti-Establishment” himself- probably gave the most cogent single quote about the Beatles receiving the medals: “Lots of people who complained about us getting the M.B.E. received theirs for heroism in the war,” said John, “They got them for killing people. We got ours for entertaining. I’d say we deserve ours more.”

Amid the furor and controversy, on October 26, 1965, the Fab Four were chauffeured (in John’s black Rolls Royce) into Buckingham palace to accept their medals. (John, still ambivalent, had to be repeatedly called on the phone, stirred, and roused out of his bed that day to go to the official ceremony.)

The boys were extremely nervous at the ceremony. John was to later claim they were so nervous that they “smoked a joint” in the bathroom of Buckingham Palace to calm their nerves. This incredible anecdote was a part of Beatles folklore for years. But the other three all later disputed this controversial claim. Paul said he “didn’t remember” smoking a joint in the palace bathroom. (Paul’s memory has proven over the years to be fairly reliable and is trusted by most Beatle fans, at least much more so than John’s very flawed and often embellished recollections.)

George was to claim they were, indeed, nervous, but that, “We never smoked marijuana at the investiture… We smoked a cigarette- we were all smokers in those days.” (Based on John Lennon’s many untrue and disproved later claims, the “marijuana smoking” incident is generally thought to today to be fictitious.)

After going through the standard rehearsals amid several hundred other awardees, the Queen entered and bestowed each of the Beatles with their M.B.E. medals.

Actual dialogue with the Queen was brief, but one snippet survives. Queen Elizabeth approached Ringo and asked “Did you start the group?” To which Ringo replied, “No ma’am, I was the last to join… I’m the little fellow.”

With hundreds of other awardees, there wasn’t much time for her majesty to kibitz.

John took his medal, almost immediately, to his Aunt Mimi’s home. (He had been separated from his parents as a youth and was raised by his aunt.) John entered Mimi’s home, pinned the M.B.E. medal on her and graciously said, “Here, you deserve this more than I do.” Lennon’s M.B.E. medal was to spend the next four years atop Aunt Mimi’s television set.

John never did get over the feeling that he had “sold out” by accepting the establishment’s M.B.E. medal. In fact, over the years, reportedly, there were many fights between John and Paul over having accepted the award. Paul (always the most “establishment” Beatle) would argue the medal was “a great honor,” while John would belittle and minimize it. (One can clearly see both Paul and George proudly wearing their M.B.E. medals on the cover and the inside fold-out of the “Sgt. Pepper’s Lonely Hearts Club Band” album two years later.)

But John never resigned himself to being happy or proud about his medal. Four years after accepting it, on November 26, 1969, a bearded, bespectacled John Lennon, now married to his bride, Yoko Ono, summoned his chauffeur, Les Anthony. He instructed Anthony to go to his Aunt Mimi’s house and retrieve his medal. He then told Anthony to return the M.B.E. medal to Buckingham Palace with the enclosed letter:

I am returning this M.B.E. in protest against Britain’s involvement in the Nigeria-Biafra thing, against our support of America in Vietnam and against Cold Turkey slipping down the charts (“Cold Turkey” was John’s latest record)

Ringo was to say, years later, “I was never going to send mine back, I knew that. John did, he had his reasons, but not me. At the time, I was very proud. It meant a lot to me- not that it gave me anything, but it gave Harold Wilson the election. It was a groove meeting the Queen, and it was far out.”

John Lennon, ever the chameleon, was to say in the 1970s, that he thought returning the M.B.E. medal was “a mistake.”