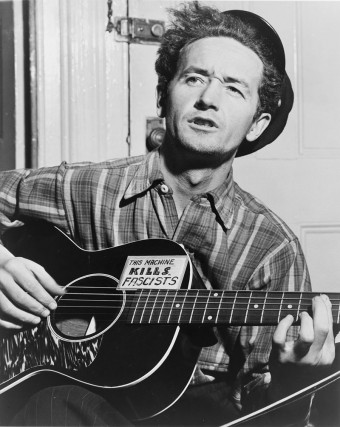 Woodrow Wilson Guthrie was born on July 14, 1912 in Okemah, Oklahoma. He lost his older sister in a tragic house fire; his mother was institutionalized and died when he was 18 (from Huntington’s Disease, which as mentioned also killed Woody), and his family also suffered complete financial ruin.

When America entered the Great Depression, like so many others, Woody headed west for California. In the late ‘30s, he landed a regular gig singing traditional and original songs on KFVD Los Angeles, but he was really an old school troubadour singing about the plight of the family farmer and the struggles of the union worker.

Guthrie made many of his landmark recordings during his first two years in the Big Apple, not to mention the album “Dust Bowl Ballads”, which introduced many in America to a form of music they’d never heard before – folk rock. Woody was among the first to combine traditional American folk with a left-wing political sensibility, starting a trend that would blossom throughout the 1950s and ‘60s – and well beyond in little college- town coffee houses everywhere.

During the days of anti-Communist hysteria in the late ‘40s and early ‘50s, anyone with progressive or left-wing political leanings was at risk of being subjected to blacklisting. Guthrie, along with the Weavers, Pete Seeger and other artists known to support the unions, free speech and equal rights were targeted for their activism. But Woody had even bigger problems.

When he was in his late 30s, Guthrie’s behavior became more volatile on the road. He went back to New York, where he was misdiagnosed with everything from schizophrenia to alcoholism. His condition progressively worsened, and in 1954 he was arrested for “vagrancy” in New Jersey. After he was admitted to the Greystone Park Psychiatric Hospital, he was finally correctly diagnosed with Huntington’s Disease, an incurable, genetic, degenerative nerve disorder most likely inherited from his mother. It was entirely unknown in her time, and woefully misunderstood in Woody’s.

Guthrie spent the last 12 years of his life in institutions, resigned to the same fate his mother met. Friends and family were regular visitors, as were the current crop of folk heroes such as Bob Dylan, Phil Ochs, Joan Baez and other modern-day folkies who came to play and sing for their idol – and to offer thanks.

Just a month later, his son Arlo released “Alice’s Restaurant,” which became an anti-war anthem for the next generation, as well as a yearly Thanksgiving tradition, and an American classic. Like father, like son.