This Day in History: October 27th- The Red Sox, a World Series, and the Star Spangled Banner 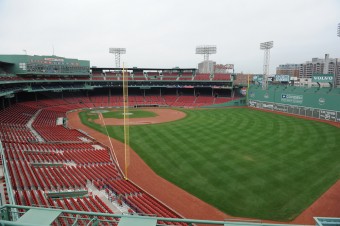 On October 27, 2004, the day that longtime Boston Red Sox fans always dreamed of finally dawned – their beloved team broke the Curse of the Bambino and won the World Series for the first time since 1918 by beating the St. Louis Cardinals 3-0 in a four game sweep.

And what an odyssey to get there. The Sox rallied after losing three games to the much hated New York Yankees to win the pennant, one of the greatest comebacks in the history of the game. After savoring that sweet, sweet victory for a few days (and greeting each other with gleeful cries of “Yankees suck!”), that sense of fearful resignation every Red Sox fan knew all too well came creeping back in. Having your guts ripped out post-season is not an uncommon phenomenon, not just to Red Sox enthusiasts, but to all but the fans of one team every season.

But for the Red Sox, they had the near century long Curse (dating from when the Sox sold Babe Ruth to the Yankees in January of 1920) hanging over their heads. The Yankees, who had never clinched a world championship before they acquired Ruth, went on to win the World Series 26 times.

As for that 1918 World Series, it was notable for a variety of reasons.  For starters, the two teams that participated (Red Sox and the Cubs) both went on a huge Series win drought. The Cubs are still waiting over a century later despite making it to the World Series after that in 1929, 1932, 1935, 1938, and 1945.  It was also the last time the Cubs and the Red Sox played for 87 years until a three-game interleague game in 2005.

This all brings us to the Star Spangled Banner and the tradition that it be played at Major League Baseball games.

During the 1918 World Series, patriotism was at an all-time high.  Major sporting events particularly became venues for public displays of unity and love of country, as they still are to some extent today. The Star-Spangled Banner had been played during sporting events dating all the way back to the late 1800s, but the song cemented itself in the sporting world during this particular fall classic of America’s pastime.

The war had forced the government to draft ball players into service during the summer and, under the “Work or Fight” order, baseball was told to end their season prior to Labor Day. Therefore, the 1918 World Series became the first (and to this day, only) to be played entirely in September. In addition, a bomb – the act of the anti-capitalist union “Industrial Workers of the World” — had blown up the Chicago Federal Building only days earlier, killing four and injuring thirty.

Game one of the series was played in Chicago. Some fans, due to fear and solemnness over the bombing, stayed away from the ballpark. Only 19,000 of the available 30,000 seats were filled.

As Babe Ruth pitched a masterpiece against their Cubbies, fans remained predominately subdued in their seats.  With the Sox leading one to nothing going into the bottom of the seventh inning, Chicago’s ownership had arranged for a military band to play the Star-Spangled Banner during the seventh inning stretch.

For the next two games in Chicago, the Cubs management had the military band again play the Star-Spangled Banner during the seventh inning stretch. The crowds were delighted and fans began showing up, wanting to be part of the patriotic display. The World Series moved to Boston and the Red Sox brass, refusing to be outdone, moved the Banner to before the game and used it to welcome wounded veterans onto the the field who had received free tickets to the game. With that, a sports tradition was born. (The Cubs would later also be integral in Take Me Out to the Ballgame becoming a Major League Baseball staple in the 1980s.)

The Red Sox would go on to the win the World Series four games to two and, as noted, would not be victorious again until this day in history, 2004.