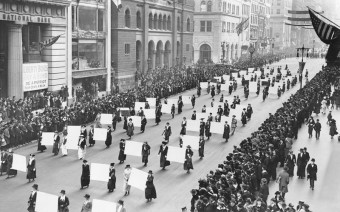 At least 50,000 people took to the streets of New York City on October 23, 1915 to march in the country’s largest women’s suffrage parade up to that time.

Nearly 70 years after the founders of the women’s suffrage movement gathered in Seneca Falls, it seemed the tide was finally turning. (Interestingly, this matter was controversial even among the two main organizers of that gathering at Seneca Falls, with Elizabeth Stanton firmly for fighting for a woman’s right to vote and Lucretia Mott stating about that proposition,  “Why Lizzie, thee will make us ridiculous.” It was ultimately a former slave, the great Frederick Douglas, that swayed the crowd at that gathering to include the right to vote in the Declaration of Sentiments.)

After enduring decades of ridicule and intimidation over the matter since then, 13 states had enfranchised women, and it was hoped that the progressive state of New York would be next to fall into line.

Parades were very popular – and influential – a century ago. Before television, and even radio, became commonplace, parades were the way to get your political message across to large groups of people at one time. This parade was held ten days before the election, and the goal was to sway any undecided voters just before they cast their ballots.

The very fact that women were taking to the streets made a very strong statement. It refuted the long-held belief that a woman’s place was in the home while the men dealt with political affairs. Some suffragists claimed that they could clean up the dirty world of politics, and wore white dresses to symbolize this. They carried heavy banners to disprove any claims they were too fragile to survive away from hearth and home.

One of the largest groups marching in the parade was teachers, some wearing black with “suffrage yellow” sashes, others donning caps and gowns. They carried banners bearing messages such as: “YOU TRUST US WITH THE CHILDREN; TRUST US WITH THE VOTE”. Good one, Ladies.

But the biggest cheer of the day went to an elderly woman who carried a placard reading: “GETTING THERE AFTER TRYING FOR FORTY YEARS”.

It wasn’t just women marching that sunny day in New York City – 2,500 men marched along with them to support the cause of women’s suffrage. 250,000 mostly supportive spectators lined the parade route to enjoy the spectacle that kicked off at 3 p.m. near 5th Avenue and lasted until 7 p.m. The New York Times dubbed it “the latest, biggest and most successful of all suffrage parades.”

For all the success of the day, the referendum on November 2nd failed. But the women of New York were indefatigable and immediately began reorganizing their efforts once again. One the eve of another election in 1917, the women marched bearing a petition signed by one million supporters of women’s suffrage. The referendum passed this time, and New York became the 14th state to grant women the right to vote.