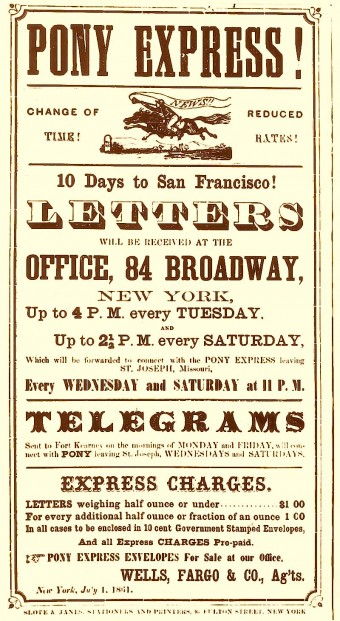 It all started on April 3, 1860, when two riders, one in Sacramento, California, the other in St. Joseph, Missouri, simultaneously embarked on a mirror-like mission – carry mail across the difficult and dangerous terrain of the American West in the shortest amount of time possible. With each load (including the riders) weighing no more than 165 pounds, the two men reached the others’ starting point in record time: the westbound rider made it to Sacramento in just under 10 days, while the eastbound man reached St. Joseph in 11.5. Together, these journeys marked the beginning of the Pony Express.

The brainchild of visionary businessman William Russell, the Leavenworth & Pike’s Peak Express Company (later to be known as the Pony Express) was born of two desires: (1) people’s need to communicate and (2) a businessman’s need for profit.

By the 1850s, hundreds of thousands of Americans had migrated to live west of the Rocky Mountains. Remember that by this time, California had seen its great Gold Rush, the Mormons had fled religious persecution and were settling in Utah in large numbers, and thousands of pioneers had made the arduous trek of the Oregon Trail over the high mountains to homestead in the West.

Before the Pony Express, it could take up to 8 weeks for a letter from the eastern U.S. to reach these westerners since most mail was shipped by boat. The few letters that went overland only cut that time by half, and then only by taking a southern route for mail service – out of Fort Smith, Arkansas, with stops in El Paso, Texas, and Yuma, Arizona, before arriving in San Francisco, California, three to four weeks later. As you can imagine, anyone who had a need for transcontinental communication was soon frustrated by the extraordinarily long delivery time, and just as long for a reply.

Coinciding with the national desire for speedier mail service was Russell’s need for a new source of income. Together with his partners, William Bradford and Alexander Majors, Russell ran a stage coach and freight business out of Leavenworth, Kansas that by the late 1850s was floundering. While on a trip to Washington, he pitched an idea to California’s Senator William Gwin – to quickly deliver mail via an overland central route that followed the Oregon and California trails.

The key to his speedy delivery was to be a system of hundreds of way stations where fresh horses and riders would be continuously substituted all along the 1,800 mile trail. The route itself began in St. Joseph, Missouri, followed the Platte and Sweetwater rivers, then crossed the Rockies via the South Pass to Salt Lake City, Utah. From there, the riders crossed the deserts of Utah and Nevada, then went over the Sierra Nevada Mountains and finally landed in California – all in about 10 days.

Hundreds of men were hired to manage the way stations where fresh horses (between 400 and 500 total) and riders (about 80) would be waiting to relieve a tired courier. The riders themselves had to be small, under 120 pounds, and the mail bags were limited to 20 pounds, all to keep the weight the horses had to bear to a minimum (which, with equipment and mail, was capped at 165 pounds). 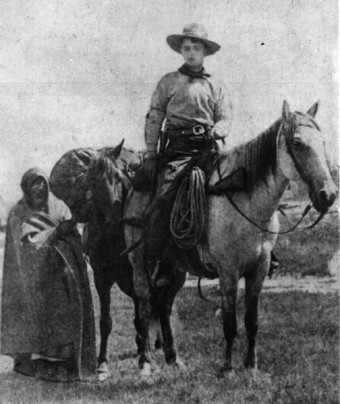 The couriers, who were paid $25 per week (about $640 today), were given a distinctive uniform of red shirt and blue pants, and at first, they blew a brass horn to signal their impending arrival at a way station. This last was soon discarded, however, when it became clear that the approaching hoof beats provided sufficient notice.

For maximum efficiency, a station was placed every 10-15 miles for the riders to switch horses, and then after every 75-100 miles, the couriers themselves would be replaced.

The enterprise was intended to make a profit, and Russell and his partners had hoped Uncle Sam would ultimately subsidize the venture. It didn’t, and even though the Express initially charged $5 per half-ounce of mail (today’s U.S. Post Office charges $0.49 for up to 13 ounces for first class delivery), the Pony Express operated at a significant loss.

Its end came quickly – just 19 months after it started, when it was replaced with better technology. Beginning in June 1860 (only two months after the first Pony Express ride), telegraph lines to connect the East and West Coasts were begun by the Pacific Telegraph Company coming out of Nebraska and the Overland Telegraph Company from California. On October 24, 1861, the transcontinental telegraph was up and running and two days later, the Pony Express officially ended. A great idea, but bad timing.