September 22, 2014 Sarah Stone
Mekala asks: Is the black box in airplanes really black? Also, who invented it?  Thanks! 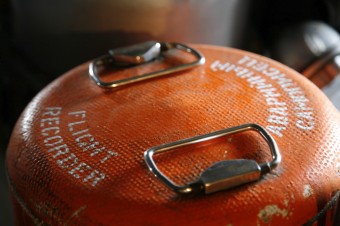 Like many inventions, versions of an airplane “black box” were independently invented by several people, in this case beginning around the 1930s and 1940s.  As for the version that began being installed on commercial aircraft, it was invented in response to a tragic loss of life. A De Havilland Comet 1, the world’s first commercial jet-powered airplane, disintegrated over India in early 1953. Of the 43 passengers and crew members, none survived. Australian chemist Dr. David Warren joined an expert panel looking into the cause of that crash and two other crashes involving the Comet 1. Australia had a vested interest in the success of the Comet because of its possible use by Australian airlines for a route between Australia and the United Kingdom.

While Dr. Warren was an expert in fuel research, the plane crashes resonated with him for another reason; his father died in 1934 when the plane he was on crashed into the ocean off Australia’s southern coast; investigators never discovered the cause of that crash. Warren’s part in the investigation of the Comet accident led him to believe that a simple voice recorder located on the plane during the crash would have saved the investigators time and energy trying to determine what went wrong. “If a businessman had been using one of these in the plane… and we could find it in the wreckage and we played it back, we’d say, ‘We know what caused this.’”

Warren drew on his background in electronics, experience he gained from building “crystal sets” or unpowered radio receivers in school, and he created a prototype of the ARL Flight Memory Unit. This device recorded both conversations in the cockpit and a small number of instrument readings for up to four hours of the flight. Once the four hour recording time had been reached, the recording device recycled and recorded over the oldest information. While the ARL Flight Memory Unit prototype, named in part for the Aeronautical Research Laboratories where Warren worked, showed success during flights conducted by the Australian Department of Civil Aviation, the Australian government and military failed to show further interest in the device.

In 1958, a British official visiting Australia learned of Warren’s Flight Memory Unit and invited him to England to continue work on the device with scientists and manufacturers. It soon went into production in England and in the United States before being installed in aircraft around the world. In an ironic twist, Australia became the first country to require all turbine-powered airplanes weighing over 12,500 pounds to have these devices onboard.

So how did the ARL Flight Memory Unit become known as a black box? That’s a bit of a mystery, especially considering that within the industry it is almost never called this and the devices themselves are a color called international orange which allows them to be more easily found at the site of a plane crash. That said, the first known instance of these devices being called a “black box” was very early on at an Aeronautical Research Council meeting in August of 1958. The man who called it that was one E. Newton. Why he did so isn’t known.

As such, there are a number of theories about how the term “black box” came about. One theory states that the name came from the fact that the boxes were often blackened and charred from fires occurring after the crash. Given the first known instance of someone calling it this was about the time Warren was invited to England to further his work on the devices (before they were widely installed on planes, other than for testing purposes), this seems unlikely. Another, much more plausible, theory is that it’s a holdover from WWII where the Royal Air Force used to refer to various experimental devices put on planes, such as the Oboe targeting system, as a “black-box.”  Another very plausible explanation is that it is originally from the engineering practice of calling a system that takes input, does something to it, then gives some output, without specifically referencing the internal workings of the device- how it actually accomplishes the thing it’s meant to do- a “black box.” Either way, the nickname was (and still is) particularly popular with members of the media, while aviation experts almost always refer to them as flight data recorders.

As for modern black boxes, they have undergone a number of improvements over the years, though the basic thing they do is the same as the original. Specifically, they consist of two separate devices: the Cockpit Voice Recorder (CVR) and the Flight Data Recorder (FDR).

The CVR records all of the noise inside the cockpit. That includes the conversation between the crew members, radio transmissions, any alarms, the sounds of the controls being used, and even noise from the engine and air moving around the plane. Today, CVRs record a total of two hours of audio before the newest audio recording overwrites the oldest part of the recording.

The FDR records a variety of flight data, though the exact requirements depend on things like the age and size of the plane and what sort of equipment is on board. However, all black boxes are required to record, at a minimum, the pressure altitude, indicated airspeed, magnetic heading, normal acceleration, and microphone keying. The final item, microphone keying, lets investigators match the data with the CVR recording. While the FDR records on the same endless-loop principle as the CVR, it records a total of 25-hours before overwriting the oldest information.

Black boxes need to survive the impact of the crash along with any fire that might occur afterwards if they are to be of any use to investigators. While they occasionally change in response to crashes, recorder crash-worthiness standards typically require boxes be able to survive such circumstances as a 1,100° Celsius fire for an hour, 33 km/s² of acceleration for 6.5 milliseconds (about what would be produced in a crash at 310 mph), and being immersed in saltwater at specific depths, among other such specifications. The placement of the black box in the tail of the plane also raises the likelihood of survival as the tail section doesn’t usually bear the brunt of the crash impact. Additionally, a locator beacon is included which can also help investigators find the black box if the aircraft crashes in the water as it emits a “pinger” signal for at least thirty days (and it will soon likely be raised to a ninety day requirement).

Thanks to the Malaysian Airline Flight 370 crash, a marked upgrade in how flight data recorders work has also been proposed, utilizing more modern technology since the last major overhaul of the “black box.”  The most significant change, and perhaps the most helpful, suggested is to decentralize the box.  Instead of just having an on-board recording, add in a system for broadcasting in real time the data it’s storing  to some central database on the ground.  This way, even if the on board recorder can’t be located (such as when the plane itself can’t be found), the ground crew still has the data they need to analyze what caused the crash, and with last broadcast coordinates, even more accurately where to start looking for the plane and potential survivors.