This Day In History: November 28

On this day in history, November 28th… 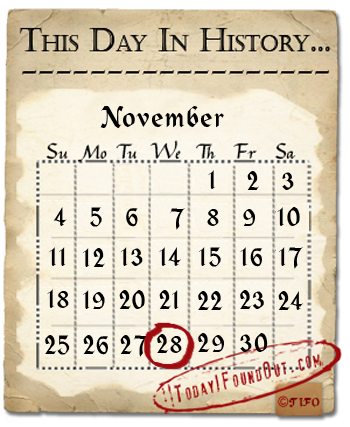 1582 : William Shakespeare married Anne Hathaway, 8 years his senior.  It was thought that since he was just 18 at the time and she was 26 and 3 months pregnant with his child that there was some pressure for them to get married.  However, there is no evidence to support that. Six months after being married, they had their first daughter, Susanna, and two years later Anne gave birth to twins, Hamnet and Judith in 1585.  While Shakespeare spent most of his married life in London, writing and performing his plays, his wife Anne and the children stayed in Stratford.  Shakespeare was able to go back and see them for some time every year and when Shakespeare retired in 1613, he moved back with his wife in Stratford.

1907 : Louis B. Mayer, who was struggling to make ends meet with his scrap-metal business, purchased an old 600 seat burlesque house in Massachusetts and re-opened it as a movie theater he named the “Orpheum”. His first theater was such a success that within a few years, he owned four more theaters and soon partnered with Nathan H. Gordon to create the largest theater chain in all of New England.  In 1916, he went on to partner with Richard A. Rowland to form the talent booking group, Metro Pictures Corporation.   He then formed Louis B. Mayer Pictures Corporation, which was a low budget movie studio he founded in Los Angeles.  All of this culminated in Marcus Loew, founder of the Loews movie theater chain, purchasing controlling interest in Metro Pictures, Goldwyn Pictures Corporation, and Mayer Pictures, forming Metro-Goldwyn-Mayer (MGM). (Read more here).

1942 : One of the deadliest nightclub fires in U.S. History took place at the ‘Cocoanut Grove’ in Boston, killing 492 people.  Legally the club was only authorized to have a maximum of 460 people in it at any given time and the fire became such a big story that it even took the front page of newspapers away from World War II news for a short time. There was only one other such fire, at Chicago’s ‘Iroquois Theater’ in 1903 that had a higher death toll of 602 people. The Cocoanut Grove nightclub fire brought about some major changes in safety standards and building codes. Most notably, all exterior doors to commercial buildings had to open outwards. This was not the case at the Cocoanut Grove club, and when the fire started the crowd of people rushed to the  doors to get out. The surge of people pushing against the doors prevented the doors from opening as they opened inwards.  Had they been designed to open outwards, a great many lives that were lost that day would’ve probably been spared.

1987: South African Airways Flight 295 from Chiang Kai Chek International Airport  to Johannesburg via Mauritius suffered catastrophic in-flight fire damage in the cargo area causing the plane to crash into the Indian Ocean, killing all 159 people on board.  To this day, it is still unclear as to what caused the fire in the cargo area, despite the black  box being recovered. The black box was found 4,900 meters deep (16,100 feet), making it the deepest successful salvage operation ever conducted. What they did learn was that at some point during the flight, a fire broke out in the cargo area on the main deck.   According to the “Smoke Evacuation” checklist, the aircraft is to be depressurized and two of the cabin doors should be opened. However, for whatever reason, this never happened. It is theorized that one of the crew members tried to go into the cargo area to put the fire out, as a charred fire extinguisher was recovered in the wreckage.  The fire might have caused structural damage, causing the flight to go down.