This Day in History: August 18th 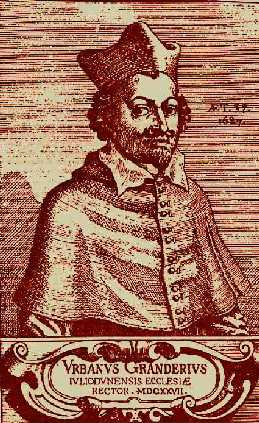 On August 18, 1634, Urbain Grandier, a parish priest from St.-Pierre-du-Marché of Loudun, France, was executed for the crime of sorcery, when all he was really guilty of was ignoring that pesky vow of celibacy (like most clerics before him, including Pope Alexander VI who had seven known children) and provoking the anger of the chief minister of France, Cardinal Richelieu.

Father Grandier began setting himself up for trouble in 1618 when he penned a scathing opinion piece about Cardinal Richelieu. There wasn’t much Richelieu could do to retaliate at the time, but that would change by the 1630s when he would become one of the most powerful men in the country.

It was easy for Richelieu to enlist the help of the Ursuline nuns in bringing down Grandier, not only due to his exalted position as Cardinal, but because the Mother Superior, Sister Jeanne of the Angels, had her own score to settle with the priest. Grandier had refused to become the spiritual director of the convent, which really miffed Mother Superior, who purportedly had a thing for the womanizing priest and wanted to get in on that action.

So when Cardinal Richelieu suggested that maybe Grandier had given the good Sisters a case of the devils, the nuns all of a sudden found themselves having hysterical convulsions and uncontrollable fits. Funny how that happens.

The whole possession and exorcism farce was made into a public sideshow attraction, so when they lowered the boom on Grandier there would be no question as to why. On some days as many as 7,000 people showed up to see:

The nuns struck their chests and backs with their heads, as if they had their necks broken, and with inconceivable rapidity; they twisted their arms at the joints of the shoulder, the elbow, or the wrist, two or three times around. Lying on their stomachs, they joined the palms of their hands to the soles of their feet; their faces became so frightful one could not bear to look at them; their eyes remained open without winking… They uttered cries so horrible and so loud that nothing like it was ever heard before. They made use of expressions so indecent as to shame the most debauched of men, while their acts, both in exposing themselves and inviting lewd behavior from those present would have astonished the inmates of the lowest brothels in the country.

In any case, these public displays had the desired effect of turning the people of Loudun again Father Grandier. He was tried in Cardinal Richelieu’s court where no appeal was possible, and anyone who had the audacity to testify in Grandier’s defense would be arrested for treason and have their property confiscated. Just in case that didn’t stack the deck enough against him, a signed contract between Satan and Grandier was produced for the court’s consideration stating,

We, the influential Lucifer, the young Satan, Beelzebub, Leviathan, Elimi, and Astaroth, together with others, have today accepted the covenant pact of Urbain Grandier, who is ours. And him do we promise the love of women, the flower of virgins, the respect of monarchs, honors, lusts and powers. He will go whoring three days long; the carousal will be dear to him. He offers us once in the year a seal of blood, under the feet he will trample the holy things of the church and he will ask us many questions; with this pact he will live twenty years happy on the earth of men, and will later join us to sin against God. Bound in hell, in the council of demons.

By this juncture, some of the nuns who got Grandier into this mess and wanted to recant were not allowed to do so because they must themselves still be under the influence of Satan to even consider such a thing!

Urbain Grandier was sentenced to death, and what a horrible death it was. Grandier’s legs were beaten so severely with hammers by his fellow priests that blood and marrow flowed from them in a stream of gore as the poor guy screamed to God in misery. (Of course, the assembled priests insisted he was actually crying to his God Satan, and kept dealing blow after blow.)

He was then dragged to the stake to be burned alive. He was not granted the mercy of being strangled first as most victims of this particularly nasty method of execution were. He died without confessing or implicating anyone else, much to the annoyance of Cardinal Richelieu.

Farcical trials and executions like Urbain Grandier’s for witchcraft were repeated many times over both in Europe and the New World, before and after his suffering. For hundreds of years, the accusation of witchcraft could cause one to lose their property, reputation and very life if you got on the wrong person’s bad side.