This Day in History: August 11th 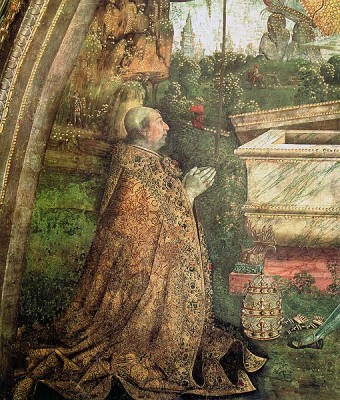 Rodrigo Borgia was elected to (or bought) the papacy on August 11, 1492 and became Pope Alexander VI. He was arguably the most controversial pope in the history of the Catholic Church, and certainly one of the most fascinating figures of his time.

Though the Borgias are strongly associated with Italy, the family originated in Valencia, Spain with the name de Borja. They were not royal or even aristocratic. The family made its fortune through political machinations within the Catholic Church beginning with the papacy of the first Borgia pope Callixtus III, who helped advance the career of his nephew Rodrigo.

Young Rodrigo studied law in Bologna, and in 1456 his uncle Pope Cal appointed him Cardinal Deacon of St. Niccolo in Carcere. By the following year, 26 year-old Rod was also Vice-Chancellor of the Holy See and an extremely wealthy guy. Despite his high ranking in the Church, Rodrigo didn’t get around to taking Holy Orders and becoming a priest until 1468.

During the Middle Ages, it was common practice for churchmen to keep mistresses and father children, but they generally kept this behavior on the down-low. Rodrigo had the unfortunate penchant of rubbing everyone’s nose in his, uh, lust for life, instead of maintaining the gentle fiction of clerical chastity (and poverty for that matter.)

The mother of his two most notorious offspring, Cesare and Lucrezia (he had seven children in all), was his mistress Vannozza de Cattani. He stayed with her until he became pope in 1492, when he took up with the gorgeous and much younger Giulia Farnese who was a pal of his daughter Lucrezia.

The conclave that elected the new Pope Alexander VI did so with a little encouragement from the new pontiff himself in the way of bribes and other questionable methods one might not expect from the Bishop of Rome. Nepotism was one of the perks of being Il Papa, and he named both his 18 year-old son Cesare and his mistress’s brother Alessandro Farnese as cardinals.

The pope also got busy wheeling and dealing the best possible marriage arrangement for Lucrezia. He settled upon the nephew of the Duke of Milan, Giovanni Sforza, and the couple married in 1493. He would do quite nicely for a first husband, at least for a while. The pope set up other politically advantageous nuptials for his other kids, marrying his son Juan, Duke of Gandia in Spain, to King Ferdinand VI of Castile’s cousin, and his younger son to the granddaughter to the king of Naples, Sancia.

By the turn of the century, Lucrezia’s husband Giovanni Sforza turned up dead at the papal palace (just one of the murders linked to the Borgias,) and Cesare was no longer a cardinal. The shenanigans such as licentiousness, violence and corruption had reached a fever pitch, garnering Pope Alexander a host of enemies.

In August 1503, Alexander died at the age of 73 after dining at Cardinal Adrian Corneto’s villa. Some suggest his demise was the result of his cup being poisoned by his son Cesare. Whether Alexander was poisoned by accident or design (the cup may have been intended for Corneto) – or if it happened at all – is still up for debate.