April 30, 2014 Emily Upton
Ranjiith asks: Why do we say something is as dead as a doornail? 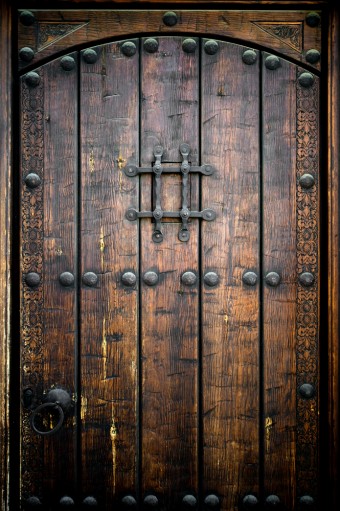 In A Christmas Carol, Charles Dickens wrote about the questionable phrase, “dead as a doornail,” saying:

Old Marley was as dead as a door-nail.

Mind! I don’t mean to say that I know, of my own knowledge, what there is particularly dead about a door-nail. I might have been inclined, myself, to regard a coffin-nail as the deadest piece of ironmongery in the trade. But the wisdom of our ancestors is in the simile; and my unhallowed hands shall not disturb it, or the Country’s done for. You will therefore permit me to repeat, emphatically, that Marley was as dead as a door-nail.

As with so many etymologies, we don’t know exactly why door nails were used in the phrase rather than something like coffin nails, but we have a reasonably good educated guess. Door nails were long used to strengthen the door. The person building or installing the door would hammer the nail all the way through the boards. On the other side, he would hammer the end flat, bending it so that the nail would be more secure in a process, called “clenching.” In doing so, the nail was rendered unusable for any other purpose. It would be difficult to remove and even more difficult to use again elsewhere. Thus, the bent nail was commonly called “dead” (not just to do with doors, but elsewhere where the nail was bent over and couldn’t be used again.)

As to why it is then a “doornail” instead of other cases where such clenching was done, it’s thought it was probably simply because this was commonly done with nails on doors and the euphony of the phrase caused it to stick, where other similar expressions such as “dead as a stone” simply don’t roll off the tongue as nicely.

Another less touted origin theory is that because of the doornail’s size, particularly the one securing the knocker, it had to be “hit on the head” with a hammer quite a few times more than your average nail. Because of the number of times it was hit, it would certainly be “dead” by the time the head was flush to the wood of the door—that is, if it had been a living thing rather than an inanimate object.

Either way, the phrase itself is an old one. The earliest record we have of it is from William Langland, who translated the French poem Guillaume de Palerne into English in 1350:

For but ich haue bote of mi bale I am ded as dorenayl.

Langsland is also responsible for the next-oldest record, dated in 1362. This time it comes from the poem The Vision of William Concerning Piers Plowman. A translation from Old English reads:

Faith without works is feebler than nothing, and dead as a doornail.

As you can see, contrary to popular belief, William Shakespeare did not coin the phrase. It was around long before Shakespeare was writing his plays and sonnets. The bard did, however, have a hand in making the phrase popular. It appears in Henry VI, Part 2, spoken by Jack Cade:

Look on me well: I have eat no meat these five days; yet, come thou and thy five men, and if I do not leave you all as dead as a doornail, I pray God I may never eat grass more.

Like many other phrases used by Shakespeare, after the phrase was said onstage its popularity took off. Remarkably, it’s still incredibly popular centuries later, beating out other “dead as” phrases like “dead as a dodo” and “dead as mutton.”