What is the Difference Between Black, White and Red Pepper?

May 30, 2014 Melissa
Rodney asks: What’s the difference between black, white, and red pepper? Do they all come from the same plant? 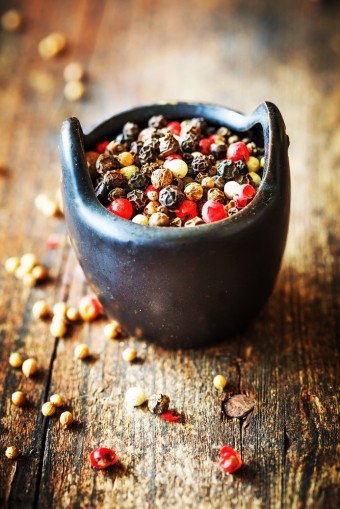 Although black pepper is the most popular spice in the world, it is by no means the only pepper in the peck.

Grown throughout Southern India and Sri Lanka, the vine Piper nigrum is responsible for green, white and black pepper. As it grows, the plant can spread out to 15 feet in diameter, and in the wild, it has been known to reach 30 feet in height.

This member of the Piperaceae family prefers warm, tropical climates. It begins to produce fruit in the summer when: “Tiny, apetulous, yellowish-green florets bloom . . . on spikes to 4½” long . . . [and are] followed by spherical fruits that ripen to red.”

Two types of peppers are produced prior to the fruit reaching its fully ripe stage. Green peppercorns, harvested in the early stages of ripeness and black produced by harvesting the fruit: “Just as the first fruits begin to turn red . . . and are then dried . . . each fruit (peppercorn) turns black after about three days of drying…”

If, however, the fruit is allowed to ripen completely, it will then turn fully red, after which the outer covering is removed, revealing a white center, which is left as a peppercorn or ground into white pepper.

There are several different plants that may be referred to as “red pepper.”

The fruit of a South and Central American evergreen tree, the berries of the Schinus molle are pink or red when ripe, and are often sold as peppercorns. Both the fruit and leaves are said to be poisonous for pigs and poultry, and there are reports that young children have gotten sick from ingesting this plant.

Far more common than Schinus molle, crushed red pepper flakes are produced by drying, then crushing, one of the many varieties (or cultivars) of Capsicum annum.

Found today from the Southern United States all the way south to Argentina. The plants are harvested when ripe, dried then crushed. In general, most develop fruits of oblong berries typically anywhere from 0.4 to 3 cm long, with thin flesh (that is orange or red when ripe) and lots of seeds inside.

One popular variety of Capsicum that may be used to make red pepper flakes is Serrano, as this foodie demonstrated: “Cut the stems off the [fresh red] peppers and cut them in half down the length. . . . [then] put them on an ungreased baking sheet in the oven at 170F  . . . for 6 hours and then shut the oven off and let them sit overnight. . . . . Crumble[] by hand – but only if you have gloves [or] crush . . . in a plastic bag [or] run through a food processor…” 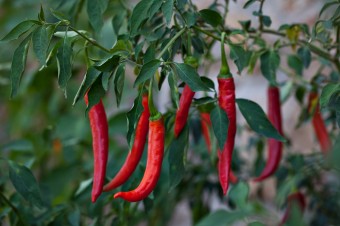 Itself a particular cultivar of Capsicum annum, cayenne pepper in its final form is typically finely ground and very hot, “generally rated at 30,000 to 50,000 Scoville units.” (However, this pales in comparison to the Habanero, which is well over twice that hot.)

As with the other Capsicum, the cayenne plant grows in subtropical and tropical regions and can reach anywhere between two and four feet in height. Similarly, the fruit produced is also elongated and red when ripe (after 14 or 16 weeks of maturation). Whole peppers are dried, then (typically) ground prior to use.