This Day in History: May 14th 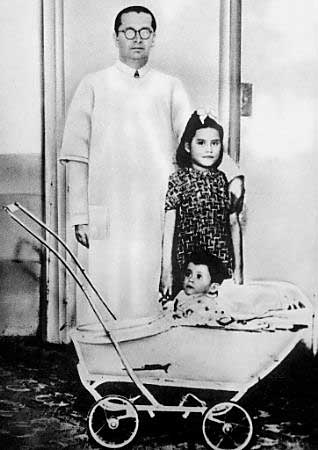 On May 14, 1938, which happened to be Mother’s Day, a 5-year-old girl named Lina Medina became the youngest female in known human history to give birth. When most girls her age were playing with dolls, Lina was delivering a healthy six pound baby boy by caesarean section.

Lina’s parents had sought medical attention for their daughter at their local hospital a month earlier when her abdomen inexplicably continued growing in size. Initially it was believed the child may have been suffering from a massive tumor. Dr. Geraldo Lozada, who was acting as Lina’s primary physician, took the girl to Lima for more advanced testing. To everyone’s amazement, x-rays and the presence of a fetal heartbeat confirmed that Lina was seven months pregnant.

Dr. Edmundo Escomel, a leading Peruvian physician-researcher who documented Lima’s case, discovered that the little girl had been menstruating regularly since the age of three, and had fully developed breasts by age four. Tissue taken from Lina at the time of her caesarian section revealed that the 5-year-old had the ovaries of a fully grown woman. However, Dr. Escomel did not believe that Lina’s precocious fertility originated in the ovaries, but was rather the result of a hormonal or pituitary disorder.

Of course, the despicable fact that someone had impregnated a five-year-old child had to be addressed. After Lina’s pregnancy was discovered, her father was imprisoned for suspicion of incest and rape, but was ultimately released for lack of evidence.

Lina’s little boy, Geraldo, named after Dr. Geraldo Lozada, was a perfectly healthy infant who suffered no adverse effects from the unprecedented circumstances of his birth. He was raised as his mother’s little brother, who was more interested in playing with her dolls than baby Geraldo. He was told the truth about his parentage at the age of ten, and died in 1979 at the age of 40 of a bone marrow disease.

32 years after the birth of her first child, Lina welcomed a second under more normal circumstances.