This Day in History: April 30th 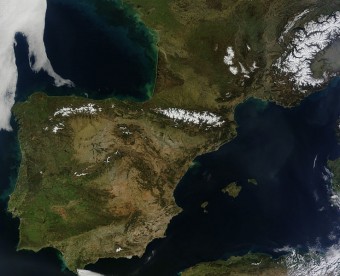 On April 30, 711, the Islamic occupation of the Iberian Peninsula commenced, ending the rule of the Visigoths after three hundred years of domination in the region. Since its inception in the 7th century, Islam had expanded rapidly, and by 711 Muslims had conquered much of North Africa. Moving northward to the Mediterranean made perfect sense logistically.

Berber general Tariq ibn-Ziyad timed the invasion of Hispania carefully. He did not strike until the Visigoth leader, Roderick, was preoccupied quelling a rebellion in the northern part of his kingdom. This ensured the Moorish invaders were met with little initial resistance and allowed additional troops, mainly Berbers, to invade Hispania in waves. Despite his best efforts to oppose the Islamic hordes, the Visigoth king was slain in July of 711, along with the vast majority of his forces.

The Berbers were able to take power very quickly due in part to political divisions in the country. Not all his subjects considered Roderick their legitimate ruler, and a number of Visigoth nobles aided the invasion forces in overtaking their homeland. One by one every important city came under Islamic control, save for a small part of the north. The Muslim power structure remained in place, in one form or another, until 1492, when Christianity once again regained ascendancy.

The treatment of Christians and Jews in Hispania under Muslim rule has long been debated. Islamic doctrine states that other monotheistic religions must be tolerated, although in this time period religious tolerance was rare among these particular religions. It’s not surprising that some Muslim leaders didn’t follow the dictates of their faith. What is remarkable is that so many clearly did, which is made evident by the thriving Christian and Jewish communities in the Iberian Peninsula during the centuries of Islamic rule.

The Islamic influence on Spanish culture has been incalculable, especially in art and architecture. The landscape of Spain was transformed with the colors, shapes and design elements so common in the Middle East. Fountains, tiles and keyhole arches, once only seen under the desert sun, were now at home on the Mediterranean coast. Today, the great mosques and Islamic palaces of Spain’s Moorish past are some of the country’s greatest tourist attractions.