This Day in History: April 29th 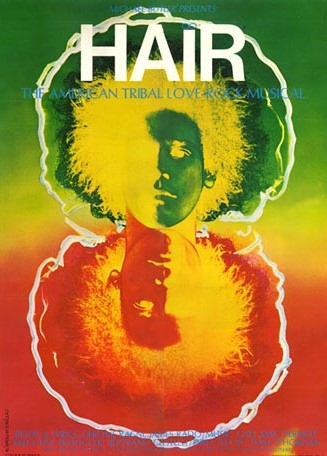 When “Hair” made its Broadway premiere on April 29, 1968, (a date picked for its astrologically auspicious alignments), the United States was in the midst of cultural, social and political upheaval of mind-blowing proportions. It was an era of undeniable violence – the Vietnam War raged on, Martin Luther King had just been assassinated a few weeks earlier on April 4th, and the political divide in the country seemed insurmountable.

But amidst all the bloodshed and strife, there were still those, mainly young people, who firmly believed they had the power to change the world. Theater writer Scott Miller describes the value system of many in the hippie movement and what drove them:

Contrary to popular opinion, the hippies had great respect for America and believed that they were the true patriots, the only ones who genuinely wanted to save our country and make it the best it could be once again. … [Long] hair was the hippies’ flag – their … symbol not only of rebellion but also of new possibilities, a symbol of the rejection of discrimination and restrictive gender roles…..

“Hair” told the story of a tribe of these young people, and their adventures the day before one of them was inducted into the armed forces and shipped off to Vietnam. Their send-off included numerous unforgettable musical numbers, drug references and some highly controversial full-frontal nudity to boot. The Great White Way would never be the same again.

The show’s creators, writers Gerome Ragni and James Rado and composer Galt MacDermot were considered pioneers setting a new standard on Broadway. “Hair” grossed $80 million and ran for an astounding 1,750 performances, so apparently theater audiences were ready for something a little more daring and counter-culture by 1968.

Even considering the more depressing aspects of the play – and there are certainly those – the overall feeling “Hair” leaves its audience with is optimism. Charles Isherwood, from The New York Times perfectly described the play’s place in 60s pop culture – and beyond:

For darker, knottier and more richly textured sonic experiences of the times, you turn to the Doors or Bob Dylan or Joni Mitchell or Jimi Hendrix or Janis Joplin. Or all of them. For an escapist dose of the sweet sound of youth brimming with hope that the world is going to change tomorrow, you listen to “Hair” and let the sunshine in.