This Day in History: May 1st 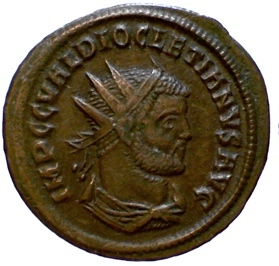 The epitome of a self-made man, Diocletian was the son of a former slave. He joined the military and rose quickly through the ranks. While acting as an imperial bodyguard, he may even have had a hand in the deaths of a couple of Roman emperors to hasten his rise to the top.

Then – lo and behold! One more emperor was murdered – Numerian. He supposedly met his end at the hands of his father-in-law, Arrius Aper, though there were those who cast suspicious glances Diocletian’s way. What ever the truth of the matter, Diocletian killed Arrius Aper for the crime of murder of Numerian. Then Diocletian became emperor himself (I know – shocker), taking the name Gaius Aurelius Valerius Diocletian.

Diocletian understood that ruling a territory the size of the Roman Empire was too vast an undertaking for one person, so he decided to delegate. He divided the Empire down the middle and appointed his son-in-law as Maximian Caesar in the west. Diocletian was still head honcho, and any of Maximian’s decisions were subject to Diocletian’s veto, which was agreeable to Maximian, naturally.

In 293, Diocletian reorganized the highest levels of government yet again with the forming of the Tetrarchy. This meant that two great emperors, or Augusti, would each rule the east and west with a junior emperor, or Caesar, who would assist them as well as be their successor. Galerius served as Diocletian’s Caesar, and Chlorus (who was grandfather to Constantine the Great) acted as Maximian’s in the west.

The system worked very well for the most part. The army was running smoothly, the Barbarians were being kept at bay and government corruption was relatively under control. Taxes were high, but most Roman citizens were enjoying a decent quality of life.

The only possible downside was the relentless persecution of Christians, but many saw them as an unwanted foreign sect unworthy of sympathy. Diocletian had no time for new-fangled cults and supported that Old Time Religion – the worship of the Roman gods.

After suffering a serious illness in 303, Diocletian started to slow down, and by 305, he decided it was time to retire. Constantius and Galerius finally became the top dogs. Maximian wasn’t all that thrilled about abdicating, but correctly assumed he didn’t have much of a choice in the matter.

On this day in history, 305, Diocletian bid his soldiers a formal and emotional farewell in an abdication ceremony at Nicomedia, where he ceremoniously handed over his imperial purple cloak symbolizing the end of his reign. Maximian reluctantly performed the same ceremony the same day in Milan.

When it was over, Diocletian returned to his hometown of Split on the Adriatic Sea in Croatia. He had built a beautiful palace there where he intended to live out his days relaxing and puttering in his garden. And aside from a brief return to politics in 308, that’s exactly what he did until his death in December 311.