This Day in History: April 28th 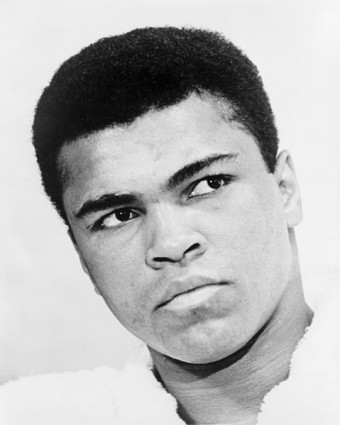 On April 28, 1967, Muhammad Ali, the World Heavyweight Boxing Champion, refused to be inducted into the armed services after receiving his draft notice. He was charged with draft evasion and faced prison if convicted.

Ali, who was born Cassius Marcellus Clay, Jr. on January 14, 1942 in Louisville, Kentucky, claimed exception from service on religious grounds, stating his position as a Muslim clergyman should grant him an exemption from the draft. Ali also refused to be inducted due to the racial discrimination he suffered within his own country. He explained:

Why should they ask me to put on a uniform and go ten thousand miles from home and drop bombs and bullets on brown people in Vietnam while so-called Negro people in Louisville are treated like dogs and denied simple human rights?

If I thought the war was going to bring freedom and equality to twenty-two million of my people they wouldn’t have to draft me, I’d join tomorrow. But I either have to obey the laws of the land or the laws of Allah. I have nothing to lose by standing up for my beliefs. So I’ll go to jail. We’ve been in jail for four hundred years.

Many young black men of Ali’s age facing the draft felt the same way. Why should they risk their lives for a country that still treated them like second-class citizens at best? And as the anti-war movement kicked into high gear, this left the government facing an important question: what would happen if thousands of young men refused the draft as Ali did?

Muhammad Ali was convicted of draft evasion on June 20, 1967, and sentenced to five years in prison. He was also fined $10,000 (about $69,000 today) and banned from boxing for three years. He was allowed to stay out of prison as his case was appealed, and on October 26, 1970 he returned to the ring in Atlanta, knocking out challenger Jerry Quarry in the third round.

In 1971, Ali suffered the first loss of his professional boxing career, succumbing to Joe Frazier on March 8 after 15 rounds in what was billed as the “Fight of the Century.” But on June 28 of that same year, he scored an even more important victory when the U.S. Supreme Court overturned his conviction for draft evasion.