The Unmasking of Moriarty

March 25, 2014 Melissa
Jill T. asks: My dad told me Professor Moriarty in Sherlock Holmes was based on a real person. Is this true and if so, who? 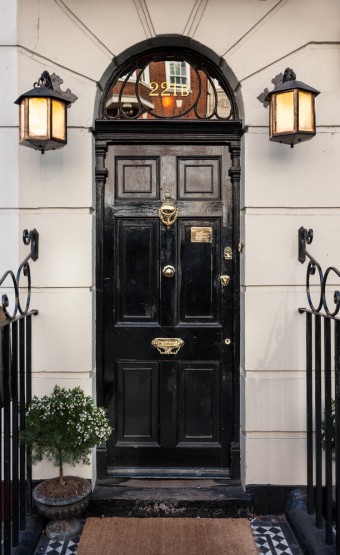 Genius and philosopher, with a “brain of the first order,” Professor James Moriarty was the most dangerous criminal Sherlock Holmes ever grappled with. Over the years, several real-life masterminds have been suggested as the inspiration for Sir Arthur Conan Doyle’s “spider in the center of the web.” If there really was a single person that was used (loosely) as the basis for the character, the front-runner is acclaimed American astronomer and mathematician, Professor Simon Newcomb.

In The Final Problem, Holmes informed Watson that the “Napolean of crime” was a genius and, at least at one time, had been a university professor:

His career has been an extraordinary one. He is a man of . . . excellent education, endowed by nature with a phenomenal mathematical faculty. At the age of twenty-one, he wrote a treatise upon the Binomial Theorem . . . On the strength of it he won the Mathematical Chair at one of our smaller universities . . . . Dark rumors gathered round him in the university town [however], and eventually he was compelled to resign . . . .

Simon Newcomb was a prodigy who wrote an unpublished paper, A New Demonstration of the Binomial Theorem, at the age of 19. He graduated from Harvard in 1858 and became a mathematics professor for the U.S. Navy in 1861 and Johns Hopkins University in 1884 (and eventually resigned from the latter). Throughout his career, Newcomb continued to focus on the binomial theorem, including it frequently in textbooks.

To most of the world, Moriarty was a respectable scientist and member of society, a fact Holmes cautions Watson over in The Valley of Fear:

But so aloof is he from general suspicion, so immune from criticism, so admirable in his management and self-effacement, that for those very words that you have uttered he could hale you to a court and emerge with your year’s pension as a solatium for his wounded character. Is he not the celebrated author of The Dynamics of an Asteroid, a book which ascends to such rarefied heights of pure mathematics that it is said that there was no man in the scientific press capable of criticizing it?

Simon Newcomb published On a Method in Dynamics in 1858 and at least two articles about asteroids including Elements and Ephemeris of the Fifty-Fourth Asteroid (1858) and On the Secular Variations and Mutual Relations of the Orbits of Asteroids (1860).

In addition, both Doyle and Newcomb demonstrated an interest in eclipses. Newcomb personally observed a few, having either, “joined or led eclipse expeditions to Des Moines, Iowa in 1860, Gibraltar in 1870, and Separation, Wyoming in 1878.”

Doyle wrote about them in The Greek Interpreter:

After tea on a summer evening . . . the conversation, which had roamed in a desultory, spasmodic fashion from golf clubs to the causes of the change in the obliquity of the ecliptic  . . . .

Doyle’s works are likewise filled with other astronomical references that demonstrate, at the very least, an interest in astronomy. For example, in The Musgrave Ritual, Holmes discovered the location of long buried crown jewels by doing calculations with the position of the sun:

I looked up at the sun. It was low in the heavens, and I calculated that in less than an hour . . . one condition mentioned in the Ritual would then be fulfilled. I . . . whittled myself this peg, to which I tied this long string with a knot at each yard. Then I took two lengths of a fishing rod, which came to just six feet . . . The sun was just grazing the top of the oak. I fastened the rod on end, marked out the direction of the shadow, and measured it. . . . Of course the calculation now was a simple one. . . . I measured out the distance . . . . You can imagine my exultation, Watson, when within two inches of my peg, I saw a conical depression in the ground. I knew it was the mark made by Brunton . . . and that I was still upon his trail. . .

Through his medical practice, Doyle met and became good friends with a fellow of the Royal Astronomical Society, Alfred Wilks Drayson. Drayson had published a few (not high quality) scientific works including The Common Sights in the Heavens (1862) and The Cause of the Supposed Proper Motion of the Fixed Stars and an Explanation of the Apparent Acceleration of the Moon’s Mean Motion (1874). More pertinently, he published an article titled Variation in the Obliquity of the Ecliptic in 1875.

Although I have found no evidence of any meeting between Drayson and Newcomb, there is a compelling circumstantial argument. Both belonged to the Royal Astronomical Society, and Newcomb was even awarded its Gold Medal in 1874.

Whether to retrieve that award, or the Royal Society’s Copley Medal in 1890, or for other reasons, Newcomb had traveled to England, including Greenwich on four occasions during the time when Drayson was also there.

In addition, all three men shared an interest in psychic phenomena and esotericism. Drayson first introduced Doyle to theosophy, and the two even held séances together. Across the Atlantic, Newcomb was so interested in “the systematic investigation of the little-known psychical phenomena,” that he became the President of the American Society for Psychical Research in 1885. In his remarks to that body in 1886, Newcomb explained how he came to believe in psychic forces:

When a set of phenomena presents themselves to us, apparently defying explanation, we may conclude either that some law of nature of which we have before remained ignorant has come into play, or that the result is due to known laws acting under particular circumstances of which we are ignorant .. .