Why the Speed of Seafaring Vessels is Measured in Knots 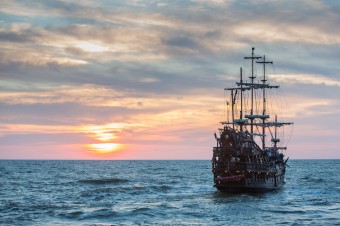 How fast you’re going while out floating on the big blue can be notoriously tricky to judge if you’re just eyeballing it. One method used to get around this issue was introduced in the sixteenth century using a “chip log” or “log-line.”

In a nutshell, this method used a plank of wood (usually wedge shaped and weighted on one end so it would float perpendicular to the water to increase drag) tied to a long thin line that had knots tied at evenly spaced intervals.

The wood would be tossed into the water and the line let out while a sailor used a sand-glass to time the number of knots let out in the given timespan.

As for the interval and the time-span, this varied somewhat in the beginning, but for reference, one mid-eighteenth century version (attested in A Voyage to South America by Jorge Juan and Antonio de Ulloa) had the knots at 1/120th of a mile with a 30-second timer.

More pertinently, this is equal to 1/60th a degree of latitude or longitude or one minute of arc (assuming the Earth is a perfect sphere, which it’s not -being squashed at the poles and bulging in the middle -but this is a good enough approximation). Thus, if you were traveling at one knot, it would take you approximately 60 hours to go 1 degree of longitude or latitude.

So, today, if you’re using a 28-second timer, to get your accurate speed in knots, you need to have the interval of knots at 14.4018 meters (47 feet, 3 inches). The number of knots that are unrolled during that span is your speed in knots.