The Origin of “Port” and “Starboard” 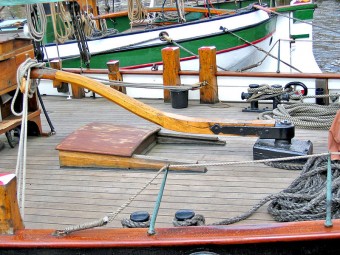 Today I found out how “port” and “starboard” became the commonly used terms for “left” (port) and “right” (starboard) on a ship.

We’ve all been there.  You step on a ship and everything suddenly becomes nautical, despite the fact that most on the boat probably have to resort to mnemonics to remember which side of the ship is port and which side is starboard- usually translating port/starboard to left/right and then mentally orienting oneself to which side of the ship that would be if facing the front of the boat. When around landlubbers, this sort of mental gymnastics could be rendered much simpler by saying the universally understood “left/right side of the boat”.

Of course, in emergency situations, it can be potentially hazardous for someone to get turned around and use their left instead of the boat’s left or the like.  This is supposedly the reason why terms like “port” and “starboard”, referring to one side of the ship or other, were originally used. Although, in the early days, seamen needn’t have thought of it as the “left or right” side of the boat- “starboard” referred to a very visible and prominent feature of the boat itself, so no chance of confusion.

Specifically, “starboard” is referencing the old practice of having a steering oar on one side of the ship, rather than a centrally placed rudder.  This was basically just a modified oar generally attached in a vertical attitude to the right side of the ship near the back (with the right side thought to have been chosen simply because most people are right handed).

As to the name itself, “starboard”, this comes from the Anglo-Saxon name for this side steering oar, “steorbord”, which literally means “the side on which a vessel is steered”.  The fact that the rudder was oriented this way gave a very convenient and completely unconfusing word for sailors, without any mental gymnastics, to know which side of the ship was being referenced; it’s just the side the steering oar is on.

After “bæcbord” came “laddebord”- “laden” meaning “to load” and “board” meaning “ship’s side”, referencing the side of the ship where loading and unloading was done.  This gave rise to “larboard” in the 16th century, rhyming with “starboard”, and again just meaning the side of the ship that faced the dock or shore (to minimize chance of damaging the steering oar and make it easier to load and unload without the steering oar in the way).

Presumably the fact that “port” and “larboard” first popped up around the 16th century is no coincidence.  Once “laddebord” was slurred down to “larboard”, to rhyme with “starboard”, a problem was introduced with the words sounding so similar. There was now a good chance of people mishearing which direction was given, particularly in stormy settings or in a battle or the like.  As such, around the early to mid-19th century, “port” popularly replaced “larboard” for this reason. At first many just made the switch on their own, but by 1844 the change from “larboard” to “port” was made official in the British navy and two years later in the U.S. Navy and has pretty much become ubiquitous since.