The Horse that Could Do Math: The Unintentional Clever Hans Hoax 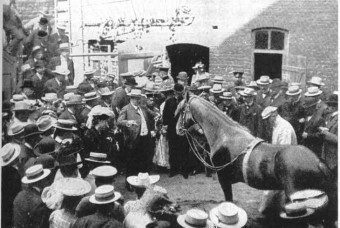 Move over Mr. Ed, Clever Hans was the original horse who could communicate with humans in complex ways. Well, at least it seemed that way at the time.

This phenomenon began in the late 19th century with a German mathematics teacher by the name of Wilhelm Von Osten. He was a student of phrenology, which meant that he adhered to the belief that a person’s intelligence, among other things, can be determined by the size and shape of their head. In addition, he was interested in animal intelligence and the idea that it was greatly underestimated by the human race.

As a result of his beliefs, Von Osten decided to attempt to teach three different animals – a cat, a bear and a horse named Hans. The first two didn’t turn out so well, but at least he escaped being mauled by the bear. To his delight, the horse did seem to respond to Von Osten’s mathematical tutelage.

It began with Hans simply tapping out numbers written on a blackboard. Any number under 10 he could count by tapping one of his hooves. Von Osten was excited and encouraged by this progress and thus decided to test the horse further. He began writing out basic mathematical problems and attempted to train Hans to recognize simple symbols. This proved relatively easy for the animal and before long he was able to provide correct answers to a myriad of problems, including fractions, square roots and multiplication.

Von Osten decided to take Hans on the road, and in 1891 he was performing free shows all over Germany. By this stage, Hans was able to spell out names with his taps, as well as tell the time and work out dates. Despite the fact that his accuracy wasn’t 100%, Hans’ abilities were impressive enough to draw large crowds, as well as attract the attention of skeptics such as the New York Times (who ran a front page story about the horse) as well as Germany’s board of education. The latter decided that they wanted to investigate Hans’ abilities, which Von Osten readily agreed to. After all, he knew he was no fraudster and there was no scandal to be exposed.

The investigation team became known as the Hans Commission and it was comprised of a variety men from differing professions. These included a psychologist, a few school teachers, a circus manager, two zoologists, and a horse trainer. Despite thorough investigation and testing, the commission concluded in 1904 that there was nothing fraudulent about Hans’ abilities and that he really was a gifted horse.

Despite their findings, a psychologist by the name of Oskar Pfungst remained skeptical about Hans and his supposed abilities. With the permission of Von Osten, he picked up where the Hans Commission left off and embarked on some thorough and unique investigation techniques. Firstly, he had a tent erected in which the experiments would take place. The primary purpose of this was to shield the investigation, and Hans himself, from outside distraction and contamination. He then made a large list of questions to ask Hans, as well as the variables that could effect the outcome.

At first, Hans reacted to questioning as normal as usual, at least when his owner asked them. However, things began change when Pfungst began to change certain environmental factors during the questioning. For instance, he asked Von Osten to stand further away when asking Hans questions. The horses’ accuracy diminished, though nobody was sure why.

As a result, the psychologist decided to try some other variables. Von Osten was instructed to ask Hans questions that he himself didn’t know the answer to, and immediately Han’ accuracy went from being roughly 89% correct to almost 0%. The same results would also occur if Hans was questioned from behind a concealing screen. It seemed that to answer questions, Hans needed to have a clear view of his questioner who incidentally had to know the answer to the question itself.

The obvious conclusion would be that Von Osten had trained Hans to respond to previously prepared questions, but why then would he so readily agree to the investigation? To answer this question, Pfungst decided to continue his studies, but to switch his focus to those who were questioning and interacting with the horse. He almost instantaneously noticed certain shifts in the posture, facial expressions and breathing of the questioners whenever Hans tapped his hoof. With every tap, their tension seemed to increase ; when the correct answer had been reached, it would disappear.

Pfungst thus concluded that Hans was taking these subtle shifts in tension as his cue to stop. This tension didn’t exist when the questioner was unaware of the answer to his own question, which explains why Hans had no idea what to do in that circumstance. The most fascinating part of this was that both Von Osten and any other questioner involved had absolutely no idea that they were giving Hans cues. It was all completely unconsciously done.

To further prove his point, Pfungst himself took on the role of Hans and attempted to answer questions based purely off body language. By carefully watching his questioners, he was successful in this test, even when they were aware of these cues. It seems that they weren’t able to stop themselves from displaying them, which is fascinating. Since then, displays of unintentional cues have become known as the “Clever Hans Effect.”

Despite the fact that Pfungst’s investigation proved Clever Hans to be something of a hoax, he did inadvertently prove Von Osten’s own theories surrounding the intelligence of animals. Sure, Hans couldn’t really do semi-complex math or tell you the time without a little help, but he was incredibly receptive to extremely subtle human body language. It may not be the intellect that Von Osten was going for, but it is nonetheless impressive.