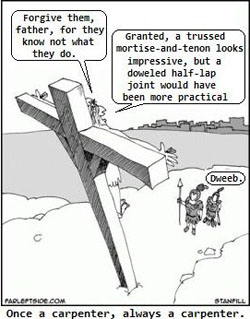 Today I found out Jesus wasn’t really a carpenter, at least not as we understand the profession.  Now obviously, eventually Jesus’s chosen profession was of a “Rabbi” or teacher; so in that sense he wasn’t a carpenter regardless of translation.  However, in his early years, it is supposed from Mark 6:2-3 that he was, like his step-father, a “carpenter” as commonly translated.

However, the chosen translation from the Greek word “tecton” to mean “carpenter” is a bit of a mistranslation.   In fact, “tecton” (in Mark) or “tekton” (in Mathew) is more aptly translated into a word describing a “contractor”; specifically, contracting  as a “builder” or “handyman”.  Not necessarily having anything to do with wood in most of the jobs he likely took.

He was basically a “Mr. Fix it”.  You had something that needed mended/fixed, designed, or built and he was the guy to call.  And note, this isn’t just referring to small jobs such as repairing a leaky roof or the like, though this type of thing would have likely been a part of what he did when bigger business was slow; it also refers to such things as designing and building bridges, stone temples, etc.   So perhaps by today’s notion of the profession, he’d more likely be called an “engineer”.