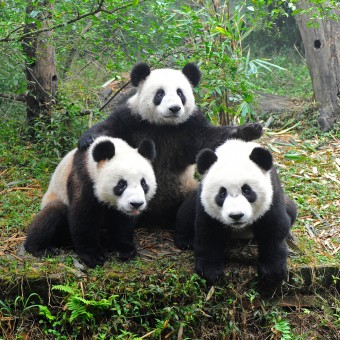 With the possible exception of boozy, reckless ingénues, there is no animal more bent on its own ruin than the giant panda. With its low population (only 1600 remain in the wild and 300 in captivity) and self-destructive lifestyle, giant pandas are in danger of extinction. Luckily, scientists and conservationists are hard at work unlocking the secrets of panda behavior and finding innovative ways to save the species.

There are precious few animals that are worse at procreating than the giant panda.

Lady pandas are only fertile for two to three days each year, and then only in the spring. Their relative infertility is only compounded by the male’s reticence to mate – especially in captivity. As Pandas International notes:

They either lost interest in mating the natural way or simply did not know how.

One common problem male pandas have is that they do not know the proper position for inseminating females with their teeny, tiny penises. (I swear, that link is totally innocuous.) 😉

At birth, newborns are only about the size of a stick of butter – approximately four inches long and four ounces heavy. Their small size and developmental immaturity combine for a panda infant mortality rate during the first year of 40%. In fact, newborn pandas often die within days of being born. Notably, at the National Zoo in Washington, D.C., five different cubs, born between 1983 and 1989, died within a week of birth.

Although infection is a common cause, other conditions contribute to panda infant mortality as well. For example, in 2012, a six-day-old panda cub at the National Zoo died from liver and lung damage. Sadly, there are also several examples of panda babies that were crushed to death, accidentally, by their mothers (who routinely reach 200 pounds).

Over the past 2 to 2 1/2 million years, the giant panda has evolved to live primarily on one food – bamboo. So specialized is its diet that it even developed a thumb of sorts to help it grasp those tasty, fibrous shoots. Weirdly, however, bamboo is not a very good food choice for the giant panda.

Second, genetically speaking, the giant panda does not even have the right DNA, called “digestive cellulase genes” to digest bamboo. (To be fair, however, no mammals possess these genes).

Third, giant pandas, as members of the bear family, originally evolved as carnivores (or omnivores), not herbivores like other cellulose feeding mammals (read: ruminants). As such, pandas lack the ruminant’s four-chambered stomach filled with microbes that break down tough fibers. Because pandas have not evolved such a system, they can only digest about 20% of the bamboo they eat. As one expert noted: “its gut anatomy and microbiome have not yet adapted to degrade those bamboo fibers.”

So, when you consider the number and variety of ways bamboo creates problems for the giant panda, you have to ask yourself, “why bamboo?”

Some scientists believe the species’ love of bamboo comes from the giant panda’s taste genes. Approximately 2 to 2 1/2 million years ago, pandas lost one of the primary genes (T1R1) for tasting umami, the primary flavor of protein-rich foods like meat (the other four tastes are bitter, sweet, salty and sour). Interestingly, the giant panda has extra genes (T2R) for sensing bitter, the primary taste of fibrous plants like bamboo.

Other researchers argue, however, that the lost and gained genes weren’t the cause of the dietary switch, but rather the result of it. They assert that cows and horses still have the T1R1 gene, but refrain from eating umami foods. They also note that: “even without the ability to taste meat, giant pandas can still choose meat.” These scholars opine that the panda’s “appetite-reward system,” rather than taste, is the primary driver behind its love for bamboo.

Bamboo May Be Addictive

Beyond taste, why and what we eat can often be determined by “the reward pathways in the brain.” In the same way that pathological gamblers and alcoholics experience a dopamine rush when partaking of their addiction, and terrifying absence when not, certain foods can create the same effects and addictive behavior.

In a recent article, scholars pushing the appetite-reward theory analyzed 166 panda genes and determined that pandas have defects in the ways their brains process certain hormones and neurotransmitters, like dopamine. They hypothesized:

It is possible that some ingredient in the bamboo may [be] able to help the catecholamine, especially dopamine, metabolism in panda. Such an ingredient may [be] able to stimulate the appetite-reward circuitry in the giant panda and play [a] certain role in setting up its bamboo diet.

So, like rats with Oreos, maybe the giant panda is simply addicted to bamboo.

Rather than trying to separate the junkie from his fix, researchers are focusing their energy on creating more pandas. At the Chengdu facility, conservationists have developed a system of twin swapping that they believe will save this endangered species.

Not as cruel as it sounds, twin swapping can only occur when the lady panda has a pair of cubs (which happens in about 50% of panda pregnancies). By nature, mother pandas will only care for one cub at a time, so the other would die if humans did not intervene. Moving in quickly after birth, the rejected infant is placed in an incubator. Periodically, keepers switch it and the accepted twin in-and-out of the mother’s care and the incubator. As a result, conservationists at the Chengdu facility now boast a panda cub survival rate of 98%.

With so many new young pandas, Chinese officials are experimenting with releasing captive pandas back into the wild. While an early attempt met with tragedy, conservationists are trying new ways of raising captive-bred pandas to improve their chances of survival upon release. These methods include having handlers dress in panda costumes and placing pandas, as a group, in protected yet seemingly wild enclosures.

Ultimately, however, the key is to properly situate the pandas in their environment. As one researcher noted: “We need to release pandas in good habitat so that pandas can survive and sustain themselves for a long time.”

Why Are Panda Babies So Small?

Why Does the Giant Panda Eat Bamboo?