This Day in History: November 7th 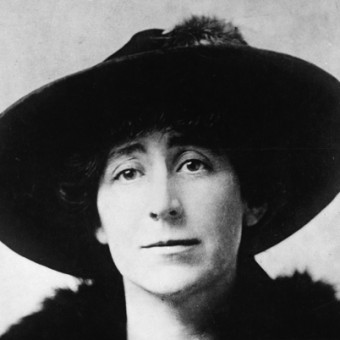 A full four years before the United States Constitution granted women the right to vote, Jeannette Rankin was elected to a seat in Congress in 1916, becoming the first woman in U.S. history to hold such an office. Even though women had yet to achieve suffrage across the nation, there was no legislation forbidding them from being elected to office in the Capital. Rankin believed that “men and women are like right and left hands; it doesn’t make sense not to use both,” and decided to fight for women’s rights from within the government.

Rankin was born and raised on a ranch in Montana to progressive parents who encouraged their daughter to live her life outside of the narrow parameters that most young women did in the early 20th century. After Jeannette attended the University of Montana and the New York School of Philanthropy, she had a brief career as a social worker before becoming involved in the national movement to win women the right to vote.

In 1914, her quest led her back to her home state of Montana, where she believed the pioneering spirit and way of life led to men having greater respect for a woman’s work ethic and intelligence, meaning these men were more apt to agree to a woman’s right to vote. Several years previously, Wyoming and Colorado had already approved women’s suffrage, and Rankin’s persuasiveness had Montana joining their ranks in 1914.

She ran as a Progressive Republican from Montana in 1916, and won one of the State’s two available Congressional seats. When Rankin traveled to the Capital to begin her new job, all eyes were upon her to see if a mere woman would be able to withstand the pitfalls and pressures of such a high-powered position. It didn’t take long for Rankin to prove that she could, nor did it take long for it to become evident that she was a highly-principled person who would not conveniently change her ideals to suit the political climate.

Jeannette Rankin was an avowed pacifist. Her first vote as a U.S. congressperson was against the United States entering World War I. Although 55 male members of the House also saw fit to vote “no” against going to war, some critics used Rankin’s vote to place doubt on a woman’s ability to function with the big boys on Capital Hill.

“Miss Rankin’s vote is regarded, not as that of a pacifist, but rather as one dictated by the inherent abhorrence of women for war,” wrote The New York Times.

Rankin’s stance against entering WWI no doubt led to her defeat during the election of 1918. Undaunted, she continued to work for causes promoting peace until she was re-elected to Congress in 1939. Just two years later, the Japanese attacked Pearl Harbor. Early the next morning, President Roosevelt addressed a joint session of Congress and called for a formal declaration of war against Japan.

During the voting, Rankin stated, “as a woman I can’t go to war, and I refuse to send anyone else.” Hers was the only dissenting vote, the final tally being 388-1. Rankin is the only person in Congressional history to vote against entry into both World Wars.

Jeannette Rankin didn’t seek re-election when her term was up. She continued working for causes that promoted peace, such as with the Women’s International League for Peace and Freedom and the National Council for Prevention of War. She continued to lobby for women’s rights and was also active in protesting the Vietnam War.